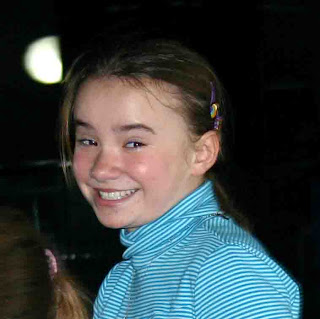 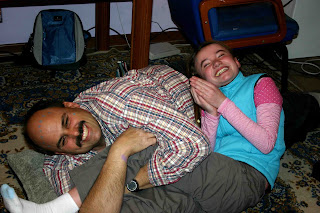 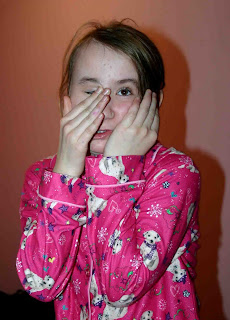 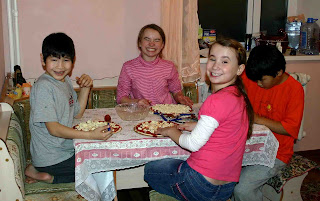 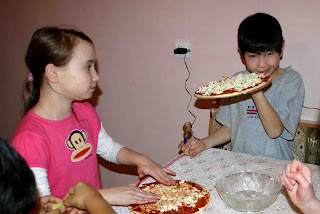 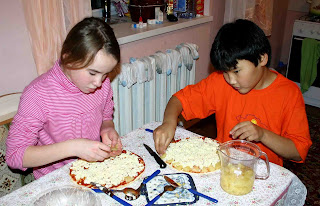 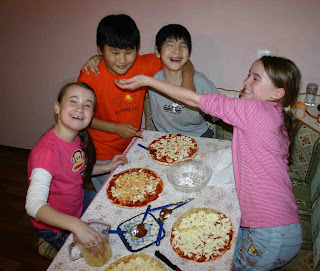 CINDY, I'M S GLAD THAT THINGS ARE GOING SO WELL. AS FOR YOUR COMMENTS REGARDING ANGELA; I AM REMINDED OF A YOUNG SHE-WOLF WHO IS USED TO BE ALPHA IN HER SMALL PACK OF TWO AND IS HAVING TO RELINQUISH HER STANCE TO YOU THE NEW, STRONGER 'ALPHA', IT MAY TAKE SOME TIME, BUT IF YOU STAND FIRM SHE WILL RESPECT AND LOVE YOU ALL THE MORE IN THE END.

AS FOR THE LOOKS, I BEG TO DIFFER, I THINK THE BOYS HAVE DOMINICKS DARK HAIR, DARK EYES AND READY SMILES, AND THE GIRLS SHARE YOUR HONEY COLORED HAIR AND SWEET ANGEL COMPLEXIONS, THEIR HEART SHOW THROUGH THEIR GAZE AS YOUR DOES. SO ME, HMM, I THINK THE FAMILY RESSEMBLANCE IS STRONG, BUT THAT'S JUST ME.

LOTS OF LOVE AND BLESSINGS A PLENTY, ME

I appreciate the truth to your comments about adopting older children. It is so true, that though we have loved them from the time we said "yes" to becoming their family, they do feel like strangers at our table and in our home. We are past much of that with our last addition, 2 1/2yrs ago, but I can't say we are totally at the place I hope to be one day with her. She came home at 11yrs old, so there was much life before me as her mom. We've come a very long way, and our kids were also very well loved and cared for, as your girls seem to have been in their orphanage. But no matter how you slice it, it just takes time to build history together as a family. True to form, as the mom, you are the one getting the brunt of her feelings and confusion. As I'm typing this, she just came to ask me to help with some oragami instructions. Who would think that's a big deal? Except a mom of a child who hasn't always wanted to let a new mother into her heart and life?

You have much experience from adopting your boys, it sounds like. I know that will make it somewhat easier, but I also know that no matter how hard we try not to let it hurt, it just sometimes does.

As you say, your girls are doing remarkably well! And as you also say, the world will see this as a sign that all is well within your family. I'm anxious to pray for your family in the coming months, and to read of the things God is doing to help them open their hearts to you. I so enjoy your posts, as I can relate in so many ways. I'm sorry you are feeling some of these things and getting some of the "cold shoulder", but I'm confident you have the patience and love to help your daughters grow to understand what a mother is. They will come to understand in time what unconditional love is, as they test the waters and watch your reactions. Hang in there.

Nancy in the Midwest, with kids home for another snow day

Hi, I've been reading your blog for a while now although up until today I haven't commented.
Today I really wanted to thank you for sharing how it really feels in those initial days of bringing an older child into your family. When we adopted it really did feel quite strange for quite a while, everyone adjusting to being a family. I struggled with people's expectations that now we were home with the children the hard part was over and we could get back to normal family life. It was so difficult to express my feelings, worries and concerns without sounding as if I was complaining. As a result I kept them to myself and worried myself silly that it would never feel normal and that they would always feel like strangers to me. I wish I had been able to read todays post back then! I might have not been so hard on myself.
I have really learnt a lot from you over the last few months, you really have a lot of wisdom and insight to share.
Thanks Sarah

What better way to bond than food? What better food than pizza? Oh, yes, I guess there is love, commitment, joy, steadfastness, compassion, and, of course, brownies.

Can't wait for your return, but am enjoying "our" trip through your eyes.

Cindy - I am sitting here thinking I should have your family come talk to my nursing students on our cultural awareness day. Nurses must learn to be non-judgmental about culture, mental health, etc. I think so many times how blind I was growing up on the W Slope - I never thought I was. Then life moved me to AZ - where I cared for many Mexican and Native American women. Later, to Galveston - Houston is said to be the most mixed culture city in the US - and I practiced at a big university. Then the front range - and Aurora holds its own with different cultures of women who came to use for care. We had a map with all the countries that our babies had come from. Now I am back and my job seems, in part, to be teaching my nursing students to have broader minds. Seriously - if you ever want to present - there will be a place for you. Wow - W CO needs families like yours!!!

Cindy - thank you so much for your continued honesty! You put words to many thoughts and fears in my heart. I had two girls living with me for a month - 5 years and 3 years - and I felt many of the things you describe with the 5 year old - and I was so surprised by the reaction in my own heart. It is good to hear this from you - continued prayers headed your way!
Kimberly

Ah, but those little things you mentioned that Angela does (play footsie under the table, drawing a picture of 'angel mama', carrying the groceries, etc.) Those acts of genuine kindness and affection, though not overly touchy feely, are wonderful, positive signs. I'll continue to keep your family in my prayers that things continue to get better and better.

It is so true that although you feel love for your new daughters, they are also strangers and you are all trying to find your place. What a huge heart Kenny has to be so worried about you! Hopefully that helps ease some of the hurt caused by Angela. Even though you know it will take longer to make your way into her heart, it still has to hurt a bit to actually see it occurring. From everything you relay, it sounds like things are moving in the right direction. It will just take time and commitment. My favorite post of yours is still the one where you told the story of Joshie and how you, through it all, remained committed to him even when it was hard to love him. I think the same will be true for your girls.