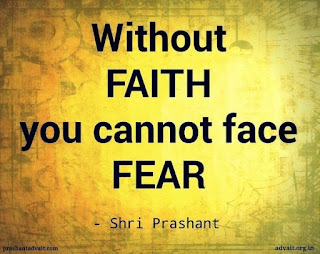 You know what I have discovered?  Faith is a really, really difficult thing to hold on to. I am not just talking about faith in God, but faith in ourselves, faith in others, faith in the world.

The past month has been a painful one for me, and it was all self-created.  Oh, don't get me wrong, the realities that caused the pain are still very much alive and true...but the pain caused by doubt and as-yet-unfounded fears exacerbated things to a completely unnecessary degree.  I am wise enough to see that and understand it, but may spend the remainder of my life trying to conquer it.

You see, January roles around, and that is when I begin thinking about our next school year and what subjects we will cover, what curricula to search for, etc.   Next year will be Kenny and Angela's senior years, Oleysa's junior year, and Joshua's sophomore year.  Guess what?  That "future" we used to talk about is nigh upon us, and it is scaring the bejeebers out of me.  The reality is that Kenny will likely never be able to hold a traditional job,  if any job at all, despite his very obvious intelligence.  Angela will absolutely be able to, but will she and Olesya be able to work at jobs that will pay enough for independence and self-sufficiency? 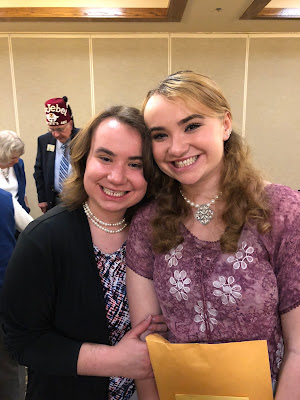 These two are the kindest people I have ever met.


Angela has a direction, and Kenny has many interests, but how in the world do I help them parlay that into meaningful work?  Will Angela be able to earn enough in a career that is notoriously low paying?  Can she handle the academics of what it will take to step to the next level of pay?  Kenny will never drive, and any sort of life he has will be facilitated by me.  What, exactly, do the next few years look like for him post-graduation?  How do we craft a fulfilling path for him? Can I manage to keep life fulfilling for him, and also find space for me, too?  Then Olesya is on the tail of that, with gifts...and challenges...galore.  How can I help her live into who she can be and avoid directions that don't require things she can not offer?

Being a homeschooling mom is an enormous job under any circumstances, being one under THESE circumstances requires a level of giftedness I just don't have.  I am not a trained career counselor, special education guidance director, or specialist of any sort.  I am a mom who is passionately advocating for her kids, who believes in them and just KNOWS there is something out there for each of them...but is doubting I can help them get there.

Trust me, the weight is overwhelming some nights.  Awake in bed, my mind swirls with questions about how to financially provide for Kenny after we are gone, how to gently guide and steer, how to explore options.  There are few experts in the US on their disability, and most people they encounter don't see it.  It is why Fetal Alcohol Spectrum Disorder is called "the invisible disability". This may change in time as the US catches up with Canada in research, diagnosing, and understanding.  In fact, a NY Times article this week explains a lot about our how prevalent and undiagnosed this is.   They look and act in many ways as competent as everyone else, and in some ways they are.

But in so many ways, life is different for them.

Some of our kids struggle with possibilities and limitations that are very real.  Kenny and Angie will not be like Matt, nor like I assume Josh will be.  Neither will Olesya.  They can't come to me with a list prepared of things to look into, directions to take, courses to study.  They simply can't think that way, and they need me to do it for them.  They CAN accomplish far more than might otherwise happen if they have that sort of support, and by gosh, they are going to get it even if I literally have to go to school with them and re-explain every lecture in ways they can understand!  They are all three so bright, so positive and hard working.  They have talents and dreams and ambition, it just needs to be helped to be lived into. 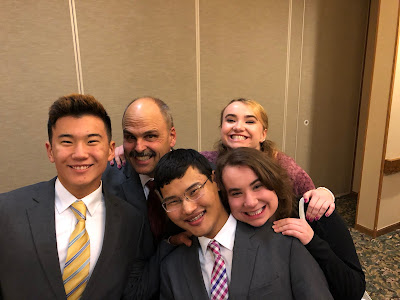 It terrifies me to think I will fail them, that I won't do my job well enough to help them step into the world confidently, independently (as much as they can be), and joyfully.  I can fail at things that are about me, but THIS?  No...I can not fail them, I just can't.

Aaaaannnddd...there is where I actually HAVE failed, and where that lack of faith comes in.  Just when you have convinced yourself you are all alone in something, that you are incapable and incompetent, God shows up in the form of all sorts of other people.

This past week the girls had an extraordinarily beautiful experience with a woman from church who pulled them in close and offered her expertise as a seamstress and overall classy woman.  She has grown daughters who had prom style dresses she wanted to share with the girls, and so they spent an evening in her care.  She offered them so much that I can't...affirmation from someone other than their mom of their beauty, how to dress well, and she helped them see how alterations can completely change a look.  Also, I am not exactly known for my style and grace, and never will be.  More importantly, our girls never had the chance to play "dress up" and Christy couldn't have really known that, but God used her to provide an opportunity to do exactly that.  I couldn't offer them this organically very easily.   I can not create a situation for the girls to have such an experience and have it not feel false.  This was natural, it was lovely, and it came along at just the right time as Angie is anticipating attending her first dance.  Christy had no idea that when I drove away, leaving the girls in her care for an hour while I attended choir practice, that I was in tears, knowing God had just wrapped up Olesya and Angela in loving arms.  Were they my arms?  Nope, but that doesn't matter at all...there is always, always room for more love.  Love expands us all, it doesn't contract.

I let faith slip away.  I forgot in the way we humans tend to forget that we don't always have to "make" things happen, that God has this subtle way of sneaking in and meeting our every need, even the needs we aren't considering in any given moment.

This past weekend I shared photos on Facebook of another way in which God is meeting needs in our family in ways I can't.  Sometimes I just shake my head at my own ignorance and arrogance.  How could I ever think that somehow I even COULD fix it all, do it all, be it all?  Kenny has needed a rite of passage into manhood desperately, and his disability will deny him that in some of the more traditional ways.  He has needed a community all his own, a place where his own passions and interests can be explored and expanded upon.  At 19 years old, and without the regular markers of adulthood, his installation into the Shriner's (Part of the Masonic Lodge that raises money and supports children's hospitals all over the US) was precisely what was needed. It was at a well attended banquet, in a room filled with elders, that Kenny was welcomed to the brotherhood as an equal.  Dominick and I couldn't have been prouder, and from the grins on their faces, his siblings who he so proudly introduced also couldn't have been happier for him.  They, of all people, knew what this meant to Kenny. 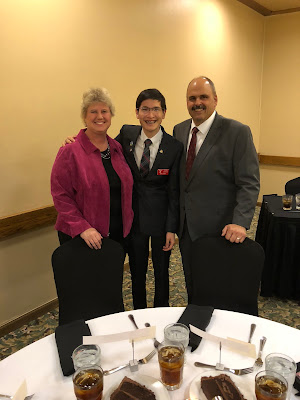 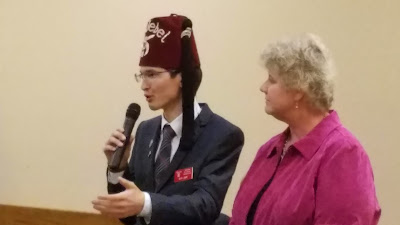 There he stood, beaming broadly, so proud to finally have earned the right to don his fez after over a year of hard work moving up in the Masons.  Two years ago when he entered one of America's earliest Lodges at Lexington and Concord during their Open House, I saw a spark that needed to be fanned.  It tapped his deepest interests of history and theology, along with his gifts of public speaking and service.  How happy we all were to see him installed!!  Again, I couldn't have created this for him, I couldn't "make" it happen authentically.  There are needs I just can't meet. 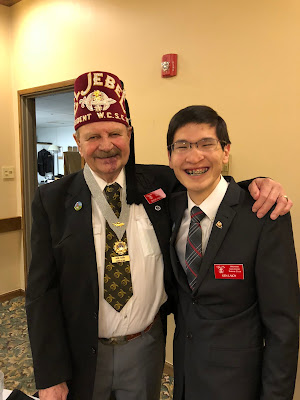 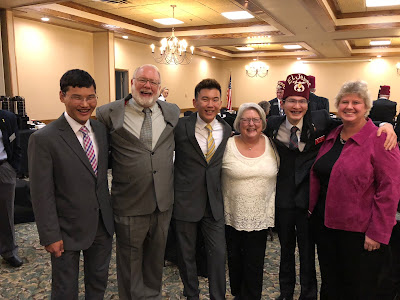 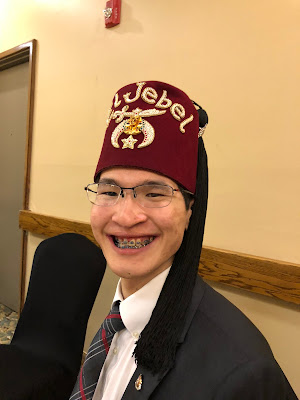 At church the next morning after the installation, this idea that others will always be walking alongside us was reiterated when Kenny wore his fez to church, sitting so proudly with it as others offered hearty congratulations and admired it.  They could have snickered at this fez-topped young man, could have ignored it, could have rolled their eyes.  I mean, I get it, being a Shriner and perhaps literally a Shriner clown at some point isn't exactly many people's idea of "cool".  Instead they lovingly came around him and celebrated with him, recognizing how important this moment was, and acknowledging it as an adult accomplishment.

Oh how this kid needed this!  A couple of years ago, Dominick and I were both deeply concerned about the state of his mind and heart.  We were worried he would never really find his place in the world, never feel he had a purpose.  His growing understanding of his disability was heartbreaking to witness and walk through with him.  He ached with grief and loss, quietly expressed.  He gave up, in some ways.

And, yet again, God sneaked up and brought a true sense of wholeness and possibility, using others to value what Kenny has to offer which is something that coming from mom alone just isn't heard in the same way.

Am I reassured now?  Will I sleep better at night and let go of the worry?  Oh, probably not! Hahaha!  Let's face it, faith is hard in all its forms.  Trust in others, trust in right timing, trust in opportunities presented, all of it requires more than on some days I can believe in.

But there are those moments when I have this flash of what God's Kingdom is really like. There are flickers of comprehension that are often doused (usually unwittingly by me),  but others come along with a new match and light that wick again, as they hold my hand and remind me I am not alone.  They may not even be able to offer any real assistance other than that hand holding, but on some days, that is truly enough.

I will eventually get it through my thick head that my gaps in ability allow others space to enter in to shine and offer their gifts.  Silly me, how could I think it as even possible for me to meet anyone's every need?

And maybe, just maybe, once in awhile God uses me to fill in someone else's gaps, too.  How I hope that is true. 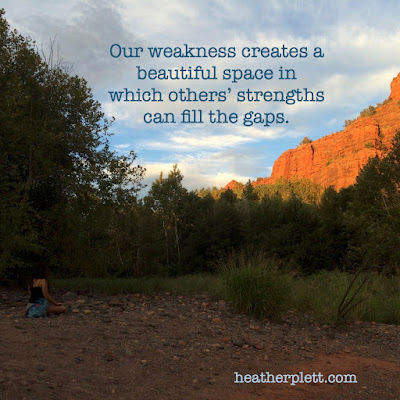