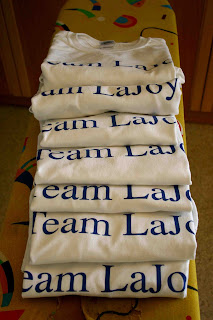 Great that the parting and first night as a family went so smoothly. Even taking a young child like our boy out of the only home he had ever known was bittersweet for us all. On to the next adventure Team LaJoy!

Love those shirts - thanks for the update! Vegas

Finally! After 5 long, hard years! I am so happy for all of you! Good luck on the rest of your business and travels.

So good to hear from you all. Was a little concerned about the flight. Much prayer as we waited to confirm that you are safely in Astana.

If Vegas likes the front of the shirt, she'll love the back even more since I'm thinking she is the one who gave us the Russian for Team LaJoy for the backs. Can't wait to see everyone wearing them!!!!

Enjoy Astana and give all our love,

Dear Cindy,
You heard it here first...I bet you get a true daughterly kiss from Angela in less than 1 year. Maybe much less, but to see the swift changes in her already and knowing how great of a Mom you are, to me there is no doubt! However, sharing your fears here is so helpful as we are just a bit behind you on a similar journey and it really helps to know that we are not alone in such fears. Sherry

What a joyous slumber party!