What Kind of Race? 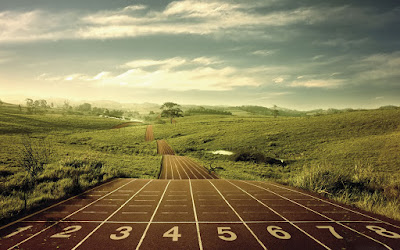 I've tried to write, I truly have.  I have typed, deleted, typed again, deleted again.

Nothing has felt right, many things feel wrong...yet all is well. 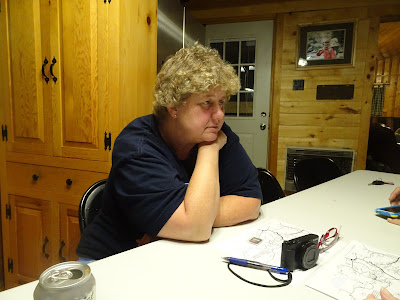 I promised I would not abandon the blog, and I meant that and still do.  However, there are times when it is necessary to step back, quiet the noise, and reassess your life.  This seems to be one of those times, and I have limited my time on social media as well as blogging.  I can't listen to the cacophony of campaign rhetoric, the diatribes, the rants.  I can't read about other children and families disintegrating, my Facebook feed filled with sharing of anguish and heartache.  I can't watch another video of black men dying, of policemen chasing, of guns blazing.

My heart has been in a distant place lately, and I find it difficult to engage with others.  Battling this summer and into early fall against the trauma that remains, the brain damage that is so often denied by others, the dilemma of old injuries thought repaired and yet remains, I am worn out.  My soul feels utterly lost at moments, and I have needed to curl inward just to keep going.  Is it dramatic over here in rural Colorado?  Not outwardly, because we handle it...and we handle it well. But handling it also comes at a cost.  We intentionally keep the drama to a minimum, comforting as we work through PTSD (never thought of it existing in our home until this summer, but oh boy, is it true), reassuring as we work with a brain that literally shut off part of the time these past couple of months, and praying with great gratitude as we know full well it could be so much worse.

Yes, all is well.  We are holding together strong, we are caring deeply for one another, we are moving forward with confidence that we will absolutely make it.  We really have no doubt.  Doing it the healthy way, not ignoring the pain nor pushing it aside, talking it through, being honest and as authentic as we can is hard, hard work.  We are not letting the outside world distract us as we circle the wagons and fortify ourselves. 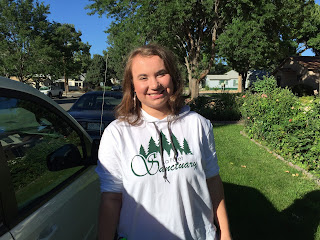 And oh, the growth!!!  My goodness, healing is beautiful to watch!  Olesya has voiced some long held grief, and is blossoming into a stronger woman than any of us imagined to be inside there...speaking her truth boldly and with passion.  It is a fascinating process to observe, if one can do so while objectively while still in the mix.  Letting go, sharing your story, allowing yourself to be vulnerable and tear down walls brick by brick is work that many refuse to do, and yet our dear, sweet daughter has done so after 6 years of being surrounded by love and commitment.  It finally feels safe.

This isn't a 100 yard dash, it is a marathon to open hearts.

Kenny has had a powerful and certainly most painful summer, so difficult to witness and yet he 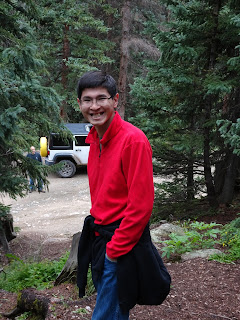 needed a witness to his pain.  He has never had his brain malfunction as it has over the past few months, complete shut down, inaccessible language for a time, total loss of information.  Gradually he has returned to us, though we never left his side.  His awareness of his disability is complete now, and the hard work he must endure to craft a life of meaning and purpose has barely begun.  That he does so with such honesty, sincerity, and grace is astounding.  He is learning, slowly, to advocate for himself, to explain to others that his disability is quite real though invisible, and to show how it is not his IQ that is damaged, but that his ability to access and use that IQ is where the malfunction occurs. Patiently, Kenny is slowly "re-reminding" himself of the information that was inaccessible, and is writing on his new blog as an outlet which seems to be revealing a gift for expression that is shining, and might help him envision a future that could be quite different.

This isn't a simple sprint, it is an unending series of hurdles unfolding before him. 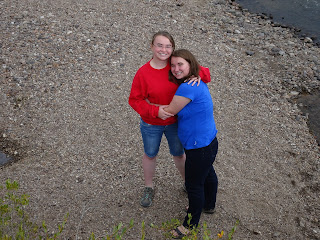 Helping others and bearing witness to their lives has allowed Angela to look deeper into herself, to ask hard questions about her life before us.  As she volunteers at the nursing home, becoming a dearly beloved visitor to a handful of special women there, she is hearing story after story of loss and resiliency, of reliance on God, and of lives lived with regret or gratitude.  It is shaping her and her outlook in positive ways, and more memories are gently taken out of the memory box, examined carefully, discussed from different angles, and then placed back in the box...probably to be pulled back at at some point as additional development occurs and new thoughts, doubts, and grief emerges. This summer she found her first true best friend, someone younger and yet as deep and thoughtful as she, someone who will always engage in the work of "becoming" as I am certain Angela will.

Sometimes, it isn't graceful, sometimes you trip and fall, or you have a false start, and you have to fight to come from behind...our kids all feel like they are coming from behind in one way or another.

Disciplined thinking and working at utter honesty about fears has been the theme for Josh, as he has 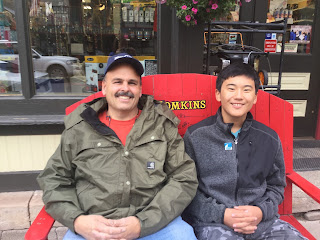 courageously admitted to moments of deepest terror at losing his family.  The child who once pushed away so violently now lives in dread of his loved ones disappearing, of being alone in the world.  Self-discipline edging close to OCD might be creeping in once again as has in the past as a manifestation of inner turmoil, and we may have new issues to work with as well.  However, this gallant, tenacious, tender son of ours touches most souls with his kindness, and his willingness to be vulnerable without hesitation, thus aiding in the healing of his long ago abandoned heart.

Like the decathlon, there isn't a single event, there are many, each with their own skills to be developed to master the course. 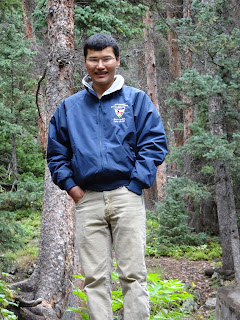 With Matt, it is not the heart or mind that has needed healing, but relief from constant pain has left him worn out, frustrated, and feeling old before his time.  Having been unable to run or play since he was 9 or 10 years old, this was to be the summer of Great Adventures...of learning to rock climb, of mountain biking, of hiking.  Hopes were dashed as his back has continued to have him in ongoing, relentless discomfort and outright pain when he tries to do much of anything.  Unable to stand for more than an hour without regretting it for a couple of days, just when life ought to be opening up to him as he nears high school graduation, it feels as if the world has narrowed considerably.  To say that real depression has been present at times is not an overstatement, and yet, stoic as ever, he soldiers on, diligently working on tasks he can do like school work, preparation for additional and final Civil Air Patrol testing, and assisting with computer work for the store.  We have no idea what to do next as his MRI and xrays revealed nothing wrong, but radiating pain down to his toes makes day to day physical activities seem daunting.

The mental part of the race can often mean the difference between winning and losing, far more so than the physical considerations.

The things holding us together are intangible, but ever-so-strong...our faith, our complete and utter devotion to one another through good times and bad, the knowledge that together we are stronger than we are individual and that we need one another desperately in hard times.  As I have read some of the most beautiful and moving writings lately from each of them, I realize they embody what it means to be a LaJoy, that our years of talking about Team LaJoy, of reinforcing togetherness, of listening and talking, of speaking of character and what really really matters has taken root.

I also know that finishing the race strong after miles and miles of painful pounding is what makes the difference between "winners" and "losers".  Endurance and steadfastness, the realization that it takes years and years to undue damage, and years and years more to build in self-worth.  That last lap is where your doubts creep in the worst, where you battle inwardly because you are so exhausted and just want to stop and rest.  The stamina necessary to cross the finish line in fine form comes from years of working those muscles...in this case, the emotional muscles...and if you haven't done the prior work necessary, this is where it all can fall apart as fast as you can blink an eye.

That is NOT going to happen here.  We have done the work, we continue to be diligent, we will sustain one another as we do the hard, hard work of being vulnerable, of being honest, of healing.

And Love WILL Win, of that I am certain. 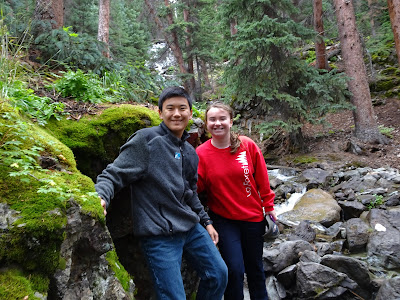 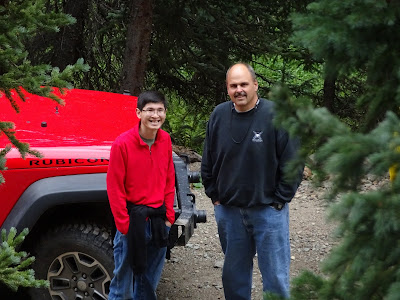 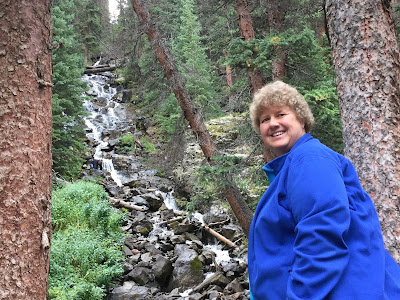 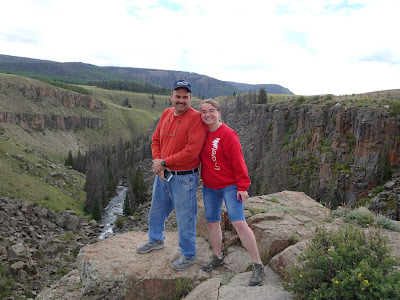 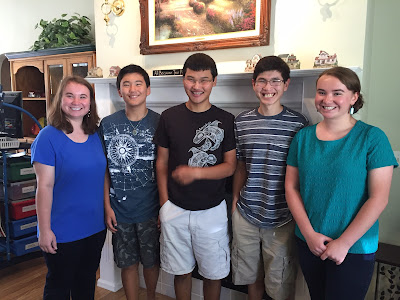