This past week I was incredibly moved by an article I read online, and I have wanted to write about it every single day, but simply could not find a way to approach what I was feeling.  I guess I had to sit and simmer with it a bit before attempting to put anything into words. 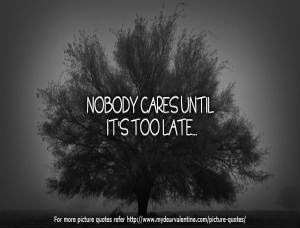 Lately the news has been filled with tragedies, events that have us questioning where our country is headed.  Where are we going wrong?  Episode after episode of questionable police shootings of suspects who are supposed to be considered innocent until proven guilty.  Abuse caught on cameras, now so ubiquitous that every passerby  has one and can record what was once a "his word against mine" policing culture that is being proven to be a bit more arguable than first imagined.

There are natural disasters claiming thousands of lives in poverty riddled nations where rebuilding will be decades long, and where families already destitute are now worse off than ever before.

Daily there are horrific stories of abuse and neglect of children at the hands of their own parents, some almost unthinkable in scale.

Venom is spewed at every opportunity from political candidates who, in an effort to elevate themselves, manage only to pervert the national dialogue and leave the American public more passive and uninterested than ever in the governing process, jaded and sickened by the unnecessarily lie-filled rhetoric that bursts forth from both sides of the aisle.

We are immersed in a culture in which we elevate that which is ugly, and tuck away that which is gentle and good, deeming that sort of news only fit for page 8 or 9 in the newspaper, buried away from the sensationalized front page headlines.

But every once in awhile, something happens that reminds us of the goodness of humanity, and of how even the seemingly most evil have souls that can be touched and transformed, if only someone cared enough.

Dzhokhar Tsarnaev's sentencing hearing found the infamous Boston Marathon Bomber with little support as the death penalty was being considered.  With the death penalty looming over him, and a very disturbing history working against him, there is little hope he might escape paying the ultimate price for his crimes.  Whether one is for or against the death penalty is not the point of this post, and there are millions who feel that even lethal injection would be too good for this 21 year old man.  In fact, victim of the bombing, Rebekah Gregory, who lost her leg in the terrorist act, is on record as saying in a comment directed toward Tsarnaev, "Now to me you are a nobody...".  Rebekah's feelings are certainly understandable, life as she knew it was ripped from her by a single destructive act, and she is entitled to all the rage and hostility she is feeling.

But what struck me so strongly was the very words she used. 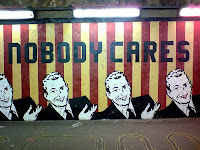 Isn't that really where the problem starts in the first place?  When we fail to see someone, when we fail to see their very humanity, they become desensitized and hardened, allowing them to commit acts one might not have ever imagined when the heart was softer and more pliable.  There is great damage in feeling you are a nobody.  There is great damage in no one "seeing you", and leaving you isolated.  We humans were made for relationship, and the further distanced we become from others, the harder our heart grows, and the easier it is to have blinders on to the pain and suffering of others.

And isn't that exactly what happened to Dzhokhar?  He was an acknowledged nobody, and when it begins to hurt too much, we all try to become a somebody, even if in the worst possible ways.  The callous, murderous act didn't suddenly "just happen" one crisp spring day in Boston.  No, the countdown clock to violence started ticking down many years prior, when Dzhokhar was far younger and walked through the world as a nobody to most folks.

This young man with the hardened heart, the one who had seldom been noticed, made a wrong turn somewhere along the line, and without even realizing it, his fate was sealed...it would just take a couple of years for that to become apparent.

But teacher Bekki Norris is different, and she had eyes that could see.  Testifying at the sentencing hearing, Norris spoke of Tsarnaev as a "really smart, hard working kid" when in 7th and 8th grade.  It was an unpopular move for the former middle school teacher now turned principle.  Testifying in behalf of the defense about a criminal who committed an almost defenseless act.  Why did she do it?  Why did Bekki Norris step into the witness stand and do what few would ever do in this case, speak of Tsarnaev in terms that were caring and warm hearted?

Her response was both surprising and Christ-like in every sense.  Sitting there in the lion's den, Bekki Norris found her voice and used it to counter the very problem brought to light by the understandably outraged victim, Rebekah Gregory, who named it so clearly in stating, "You're a nobody."  When posting on Facebook about why she spoke for the defense, Norris replied with compassionate conviction saying, ""Yes, he did the unforgivable. And yes, I still love him. And -- this one is hard to fathom, I know -- he still needs love."

Without negating the evil he had perpetrated, Norris added, "He was already rightly found guilty. I testified to help the jury see why he might be spared the death penalty. I also hoped to show him, in spite of what he's done, that someone cares about him as a person,"

Funny how Christ shows up in places you'd never expect.

Isn't that what brought Dzhokhar to be carrying a homemade bomb that Spring morning in the first place?  Wasn't the fact that there was not enough care for him as a person the very thing that made it so easy for him to be persuaded to participate in such a heinous act, bringing about the death of so many and the life altering injuries of even more?

No one can blame Rebekah Gregory's response after the fact, we might all say similar things as we went about the act of "moving on" with our life and trying to come to grips with an experience that changed the entire course of her life forever.  I am not blaming her one tiny bit for expressing herself in those very words..."Now to me you're a nobody..."

What I am trying to say, and what Bekki Norris was pointing out, was that Tsarnaev was once a little boy with great promise, whose future looked bright until he grew ever more into the nobody that Rebekah called out.

How many nobodies are there in your life?  How many kids or adults remain unseen, unacknowledged, and unloved?  How might their lives be different if just one Bekki Norris stepped in early enough with eyes that see another, and words that  speak of possibility and hope?

What good does it ever do for someone to be a nobody?

Dzhokhar Tsarnaev's are not born, they are made.  They exist because they are nobodies in a world that has us all yearning to be somebody.  They are created very simply, by people just as normal as you and I, who elect to walk by without a glance.  This may sound like an oversimplification in this case, as one looks at testimony that outlines a trajectory that included exposure to radical Islam, an ever shifting home life, and an older brother who lured a younger one into a new way of thinking.

But when you think about it, oversimplification or not, when any human being becomes a "nobody", bad things happen.  When we are a "somebody" to even one person, that can sometimes transform a future.

No one deserves to be a nobody.

My faith teaches that regardless of what we have done, we still matter, we are still worthy of care, concern, and compassion.

Bekki Norris' words were perhaps the single best sermon I have ever heard, and she put action behind the words.

May we will do the same. 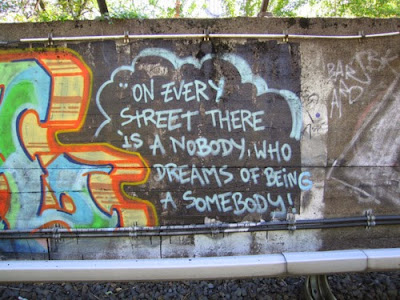 Wish you snd Steve could share your thoughts on this and related subjects. Would be interesting, if loud. My 10 years in Head Start were motivated by the goal of showing those preschoolers that they matter.