It was 15 years ago on Mother's Day that I became a mom for the first time.  Thrust into my arms was the tiniest, sickliest infant baby boy who wrapped his arms around me and never let go.  Fifteen years later, the strapping young man before me bears little resemblance to the 14 lb 11 month old he once was.  Little did I know that four more children would follow that would fill my heart and our home even more.

During that fifteen years span, we all worked together to do the hard work of claiming one another, of becoming family, of healing old wounds and seeing ourselves in new ways as we throw away old self-images and wrap ourselves in the cloak of love and acceptance.  It has not always been easy, many of you have been along for the whole ride and have watched the progress from afar.  I have spent countless hours holding, rocking, talking and nurturing children through their pain, and have been blessed to see them take tentative steps out into the light.  Some are fully there, and some are still hanging out in the shadows occasionally.  It is a slow process to become a Beloved One once one has been carelessly cast aside.  Accepting that you have value and worth, internalizing it, and living into it is harder work than anyone might ever understand.

It is usually I who has done the claiming, and I have never really been claimed in the way I have claimed others.  I really had no idea what it feels like, I only know the effort that goes into making sure it happens.  This year though, I have been claimed in a new and profound way, and it is more life changing than I knew it could be.  I truly had no idea how much complete and enthusiastic acceptance and love could mean.  Most of my relationships have gradually developed over time, there has been a slow dawning of what might be possible in a friendship with someone,  and then a slow yet steady living into a new connection.   I have some of the most rock solid friends a woman could ever want...or a family could ever want, for that matter.

The past few months, however, I stumbled into a friendship with someone with whom the claiming was immediate...an instant connection on both sides after the sharing of a mere single email.  In stark contrast to how almost every one of my previous friendships began,  I was not only claiming someone, and stated so with no hesitation and almost immediately, but the claiming was reciprocal.  At first, I admit to a lot of doubt.  Why would anyone truly pursue a deep friendship with me, of all people?  No one could possibly like me that much, that quickly, to want to grab and claim me.  Yet the stuff of real relationship was all there, and it was important, and despite my feelings of unworthiness, someone saw value in me, and wanted me in their life.

Then something even more wonderful happened, I gained a couple more amazing kids in my life in the form of my dear friend's children, albeit long distance.  I, of course, fell in love with them immediately (Come on, I AM a "serial adopter", I have been told!) but with the distance and lack of opportunity to be interacting often, I had no real way of knowing if that connection would grow.

And once again, I was claimed...unexpectedly, beautifully, and lovingly.

I was adopted, and my "certificate" was in the form of a T-Shirt.  You see, my two newest additions conspired with my five "live ins" at the behest of one of the long distance ones, and created and paid for the coolest gift I could have ever received.  Take a look at this: 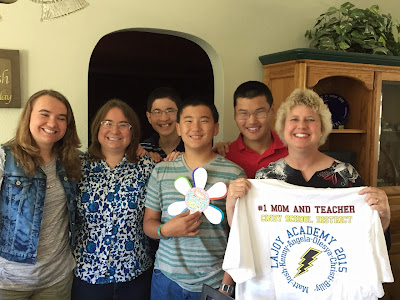 Here we are on Mother's Day.  Everyone looks so tall and grown up!!
I received a lovely homemade card in the shape of a flower, and each of the kids wrote a sweet note on the back of one of the petals. 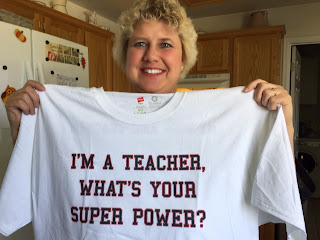 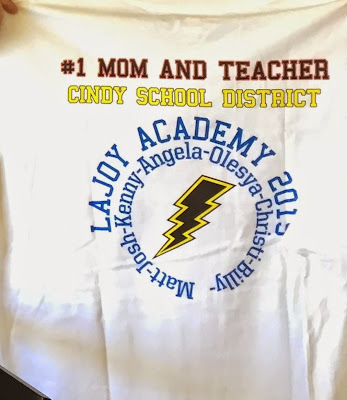 Yes, two more names, Christi and Billy, who both wanted to be included...
and claimed me, all of us really, as theirs.


Others have claimed us in very special ways, as I received a very lovely card from another friend who is not a mommy herself but who is very important to me.  One of the people who has claimed us all in a deep way is our beautiful Miss Mary, whose heart is as big as...well...a mural! 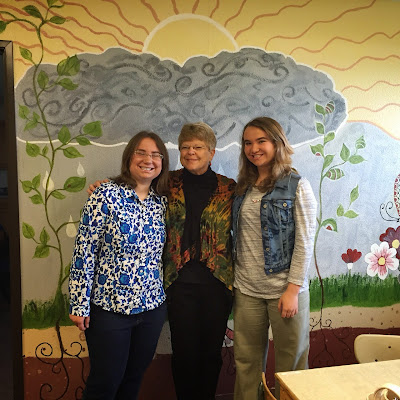 Certainly claimed by Miss Mary!  Best teacher they ever had...really. 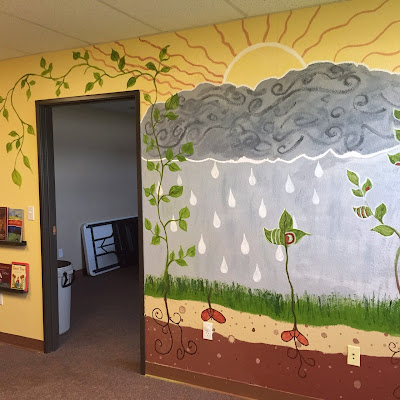 I think this turned out so beautifully!  They all had a wonderful time, and I hear a little singing and dancing was involved along with painting. 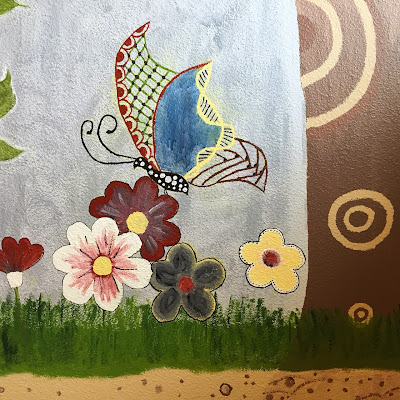 Angela created this butterfly and the flowers freehand, getting ideas quickly from Google images on the spot.  Of course, tech was involved :-)

You know, I used to totally laugh over the phrase, "It takes a village to raise a child."  Many years ago, I would have absolutely agreed with the riff on that one that makes the rounds on Facebook from time to time that says, "I've seen the village and I don't want it raising my child!".  As I experienced a true sense of community around our family, I began to see this differently.

We, as a family, have been claimed in a unique and wonderful way that still astounds me.  Over and over again, someone steps up with encouragement, teaching, nurturing, and support of all kinds.  Why do WE deserve so much care?  I can't help but ask that question.  I do know this, however.  If you don't want the village raising your children, maybe the problem is YOUR selection of the wrong village!  As for my village, we know we wouldn't be where we are without it, and we value it more than anything we have in this world.  It takes a village to claim us, and we claim it...then we do what we can to contribute to it.

And that is really what it is all about.

How beautifully written and expressed, Cindy...the notion of claiming and being claimed. Our family has indeed claimed yours and we, too, have been richly blessed in being claimed in return.