Just Another Day in Paradise

Most people would take a look at our life, and would see anything BUT "paradise".  In fact, for many it would be more like Dante's Inferno, a chaotic, daily struggle to keep it all together.  Daily, it is so hard to just keep up...bills, dishes, laundry, appointments, grading, more laundry, grocery shopping, medical documentation, academic planning, banking, "churching", sweeping, sleeping.

We forget that in the midst of all of that craziness, something is happening...a life is being lived out, touching other lives being lived out, and what happens in those moments is what life is really all about.

Taking for granted the little interactions each day, we forget that had one decision be made differently, everything would be different.  As time piles upon time, we forget what an impact we have on those around us, how the little things add up to big things.

Every day, without fail, each of our kids gets a long, slow hug from me each morning.  For some, it is when they are barely awake and have just shuffled out for breakfast.  For others, it has been due to an intentional seeking out of mom for the morning hug.  Sometimes, we have raced to get ready for school, and when all are sitting there, it is a let's-go-around-the-table sort of thing as I lean over and bear hug each and every one of them.

Those hugs add up, and we don't even notice it.

The little consistent things matter far more than we ever would imagine they would, until we are on the downhill slide of parenting and see the tangible results of years of constant connection.  How many hours did we read with and rock Joshie and Matthew to sleep?  How many hours of that sort of interaction did the others miss?

If we spent only 1/2 an hour each night with the boys until they were 6 years old, subtracting for a missing first year, we still would have reached almost 1000 hours of time together. 1000 hours!  And I can tell you for certain it was far more than that, for Curious George was begged for over and over again, and Green Eggs and Ham was served a gazillion times.

And that was only bedtime reading.

Yesterday I received a beautiful email from Angela, and in it she said something I will cherish forever.  She made me rethink our life, made me step back and view it from all angles.  The grass is dying and much of it has been replaced by weed patches.  Furniture in all but one room is mismatched and some of it pretty threadbare.  Cars have dents in them, rusty doors, and far too many miles on them.  Money is tight and will be even tighter in months to come.

But you know what?  She doesn't see any of that.  She doesn't view our life through the same lens, and she opened my eyes last night with what she said:

"You know more about how to get a child's heart when it was once broken, and that is what makes our lives seem like  a paradise."

So tell me, what blinders have I been wearing and how long have they been on?  What am I missing?

Ahh...I do fail to see it sometimes.  I fail to see the constant, daily laughter when we are all together.  I fail to see the peace which we live within.  I fail to see the comfort that comes from being heard, or the joy in finally accomplishing some new task or learning something new.  I fail to see much of it at all most of the time, blinded by busy schedules, school planning, and simply the daily emotional toll that is taken in trying with all my heart to be a very present and aware mom, which means tuning in 100% of the time.  All of it hinders me, and keeps me from seeing our Paradise.  I spend far too much time contemplating all the things that really don't matter, and I spend far too little time looking at...well...the little things that are really what make up a life.  The Big Things are often just interruptions in an otherwise dull, but fulfilling existence.  Why is it fulfilling?  Because you have to look in the right places and with great intent.  Paradise is really right there, it has been all along.  We just tune it out, placing others things on a higher rung than they deserve.  We elevate the superficial and relegate the important to the back seat, mismatched values fully on display with such acts.

Most people have lives that look a lot like ours...a mad scramble to maintain a middle class lifestyle, attempts here and there in little ways to make the world a better place, and lots and lots of failures along the way.

But I really think the thing I need to try harder at is seeing my own Paradise right here.  It may not have sandy beaches and crystal blue waters.   It has a lot more going for it than that.  It has love, respect, and peace. 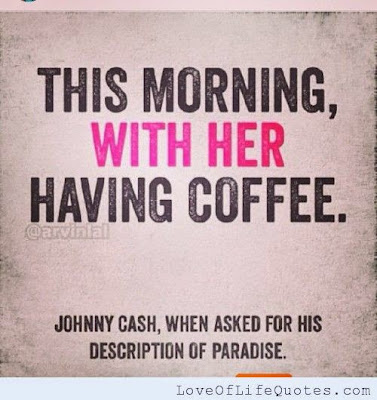