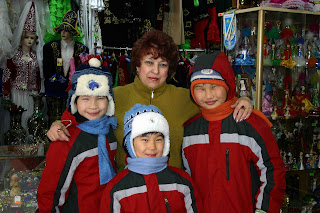 You all are getting 3 posts today with photos, this is the last one and I have nothing in particular to write about as I have been doing a little too much thinking in other directions the past couple of days as we try to recuperate.  So you get a little of this and a little of that today!  Matthew woke up feeling a lot better, his giggle was back and although a little stuffy he is fine.  I am feeling a little better but loading on the antibiotic and it will take me longer to get MY giggle back!
I say that but I DID giggle this afternoon over something Joshua said.  I had my ministry class texts stacked up and I had put post it notes on them on which I noted what chapters I was to have read for the next class.  I had another ministry book that was given to me by a friend and I had labeled it with a post it note marked "Fun" so I wouldn't confuse it with my school texts.  Josh was looking at the book which laid upside down marking where I was while working on something else, read the note and asked me why I had written "fun" on it.  I explained what I had done and he said "So did you mark your other books with a B?" and I asked "Why would I mark it with a "B"?".  He said, totally straight faced "For Boring".
My kids crack me up.
We heard from Irina today that all looks like a go for leaving here on the 4th for Astana.  Paperwork is on track, address registrations are being worked on, and we are a week from finally becoming full time parents to Angela and Olesya.
Wonder what it will feel like???
Will it finally feel "real"?
In the meantime school work has kicked into high gear so the remaining time can be "school free" and enjoyed.  It will be pretty hard to dig in to much while we are on the road so the boys have really had a great attitude and not complained one bit about doing nothing but school work for the past few days.  We have encouraged them telling them we have less than a week of school left before they have a break and we can have a celebration and pack the books up!  I am really proud of them and their terrific work ethic here.  It would have been easy to take advantage of the unique circumstances and be lazy,. but they haven't at all.  It has also been a lot of fun to learn together, to curl up on the bed or couch and listen to the kids as they read or diagram sentences or work on fractions.  I know, I am a sick puppy to actually enjoy that but it IS fun to see the progress the boys make and watch as they master new skills.  And they all love being together so much it has been a treat for all of us!
It has been a huge blessing to have this time together, stepped outside of our usual hectic schedule.  It is sort of like camping out for 2 months, but in warmer and better accommodations!  The boys are sleeping all over the place, on our floor, on the couches pulled out and sometimes not, sometimes sharing beds with each other and sometimes not.  No alarm clocks, no schedules to keep, no work stress or bills to pay (Thanks Debbie!).  And it seems the boys are growing up right before our eyes.  Aside from missing teeth, there has been a lot of inner growth and maturing happening, each one is a little but different.  The one we notice it most in is Joshua.  He is a little old soul at moments anyway, and here he is just so grown up acting at moments...when he is not being babied by his brothers and sisters.  MAN they spoil that kid!!  I thought they were supposed to be complaining to us that he is the favorite youngest child...today I had to remind Matt and Kenny that Josh has to do things on his own to grow up to become the responsible young men they are growing into.  This was after Kenny told Josh not to worry about taking out the trash, that he would do it for him so he didn't have to go out in the cold.  Matthew looked up at me and said "I know you're right mom, but sometimes he is just so cute we can't help ourselves!" as Kenny giggled his unique little Kenny giggle next to me.  I threw my hands up and in mock anger said "I give up!!" and Dominick threw out a comment from the kitchen "Don't complain when he is 14 and doesn't want to take the trash out boys, he won't be so cute then!".  They both looked at each other, dissolved into more giggles and said "Yea...he will be even then!". If Josh really didn't carry his weight we'd of course step in seriously, but he does his chores without complaint and more than many his age...if his brothers or sisters want to nurture him a little, I'm not going to stop them :-)  I am thankful that they all love each other so much!
One more picture for the day, here are the boys at the Kazakh gift shop in town.  This wonderful store owner dressed them up, zipping up their jackets and tying their scarves up for them, then kissed them right before I pulled out the camera.  While we may get tired of being stared a by strangers, we sure have been treated warmly by those who actually interact with our family.  There are some terrific people here in Kazakhstan, we will miss them all and carry them in our hearts for a very long time after we leave.
at January 27, 2010

Delighted you are all groping your way back to health. There will be so much new to see and do on your journey home and after you get here (and recuperate from jet lag). Fending off friends who want to see and hear and hug will be one of those things.

Missing you, looking forward to your return,
Lael

Man! I love it when I have a new post to read on your blog first thing in the morning! I make my day, and I am smiling throughout the day. I am having many adventures, vicariously, through you and your famly.

I can't wait to see you! Study hard, little girl. Hope to see you on Feb. 19th. Safe journeys.