Although we don't feel comfortable posting pics of the girls until we are done with court, we wanted to share a bit of what our Christmas was like. Don't worry, we will go back and fill you in with photos later.


We had a great holiday, which included learning we have a court date for December 29th! Our document is supposed to be here on December 28th, earlier than we expected (and yes, those of you who caught it I did have a typo saying January 30th for the document to arrive). That is only 4 days from now! Then about 4 weeks from the court date we should be able to head for Almaty then home...so looks like our stay will be a tad bit shorter after all.


We hope all our friends and family are having a great Christmas as we know that right about now you all are up, opening gifts, and enjoying the company of loved ones. Although ours is over and we are settled in for the night, we are thinking of you all and sending out love.


Here is our Kazakh Christmas!: 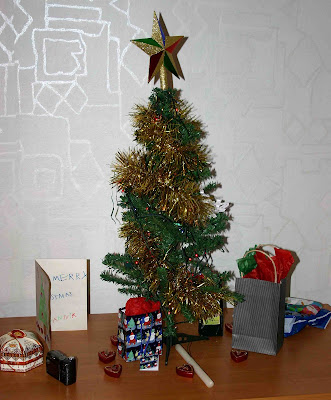 Here is our "Charlie Brown" Christmas tree. The boys thought the heart candles should go beneath it. We may not have had many presents under the tree, but funny how not a single kid complained or even acted as if it was out of the norm. They each got one gift, and acted as if they had been given the world. Matthew got a Russina version of a Lego set (WAY cheaper than Legos!), Joshie got some Ben 10 action figures, Olesya got a doll and asked "How did my mama knowthe exact doll I had always wanted?", Angela got a Klutz stencil set, Yannik got a wooden puzzle that makes a helicopter. And Kenny... 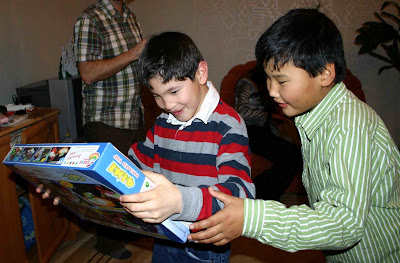 Kenny got doll house furniture!! He was thrilled and it came with plastic walls to make rooms. He loves playing "family" and wanted furniture for his wooden house he is building back home so we found this little set here and he spent a couple of hours playing with it already. 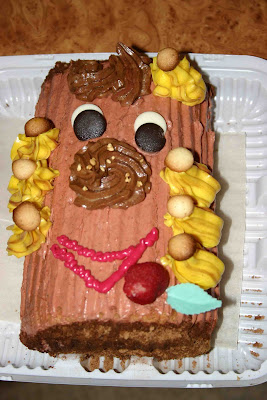 Jocelyn, Sven and Yannik celebrated with us and brought this beautiful Yule cake which Jocelyne learned isa character from a Russian folk tale of some sort. 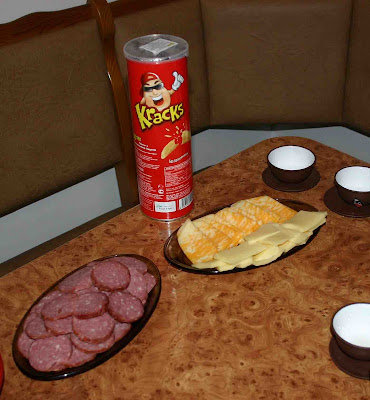 Christmas dinner...or part of it. We did have fried chicken tenders, apples and oranges, crepes and wannabe french fries as well. The girls had never had Kracks before which are a Russian version of Pringles. Pringles are $600 Tenge which is $4 US Dollars a can. Kracks are about a buck and a half and taste pretty similar to Pringles. 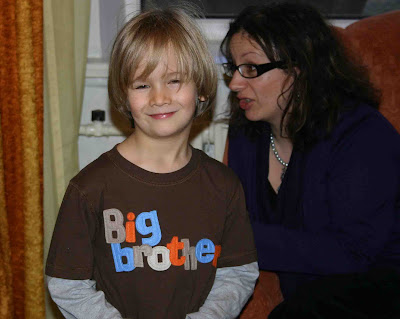 Here is Yannik, who was not feeling 100% up to par tonight and might be coming down with a bug of some sort. But that didn't stop him from celebrating and also wearing his new shirt! Sven and Jocelyne had court today and their adoption was granted!!! We are all so happy for them. 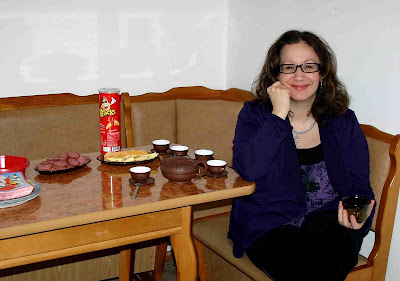 Here is Jocelyne with a new tea set she bought the "Tea Fiend", Sven...who I realized I didn't get a decent picture of the entire night! Sorry Sven :-) 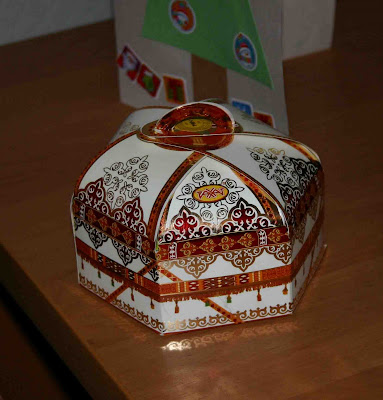 This is a little yurt that the Oborn's gave the boys with candies in it. I think it is so cute! 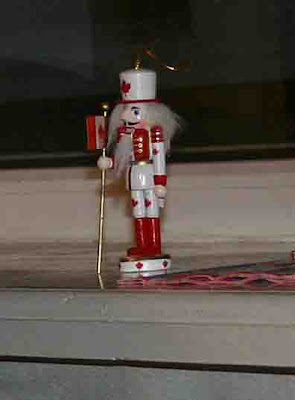 In keeping with the international flair of our family and friends, here is an ornament we were given as well. Love the Canadian theme! Sadly, we didn't bring much with us in terms of gifts but Dominick is going to pick a couple of things up and bring them when he comes back. Can't let our new Canadian friends go home without sportin' a little of Colorado with them! Ironically, Sven actually knows our area having worked in Colorado a few years back. What are the odds of that? 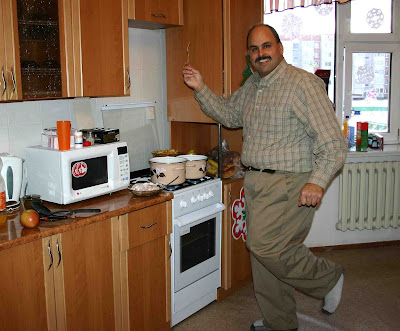 Your waiter this evening...Dominick cooked all the chicken while I breaded it and helped keep the kids in line and the house cleaned up. You are awesome Domby! Whenever anyone asks how we manage to do all we do...this is why...and the other "team" members as well. Seeing Angela and Olesya in action tonight when we cleaned up quickly for an official visitor, I can tell we will have enthusiastic helpers in them as well. We all worked together as if we had been doing this for years and had the place picked up in 10 minutes!! 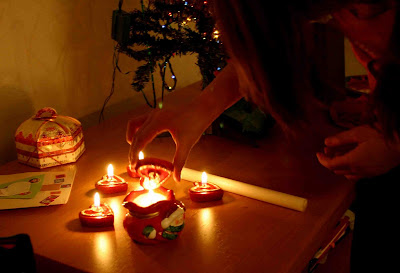 I was so touched to realize how deeply moved the girls obviously had been by the boys' adoption ceremony. Both were wearing there rings tonight, and Olesya kept insisting on turning out the lights and lighting the heart candles again. Kids with hearts that "get it"...yea...totally LaJoy kids.
We had one small last gift to give the boys, but couldn't do it in front of the girls...at least not this year. Next year all bets are off :-)
We made them close their eyes and then handed them each their special pair of underwear!! 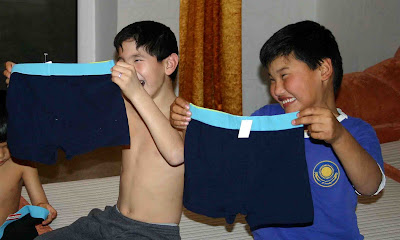 As you can see, they LOVED them!!! 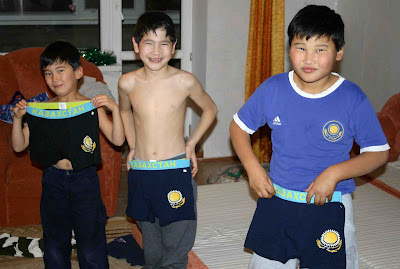 Matthew and Josh are thinking "Mommy... PLEASE don't make us wear only these and put a picture on the blog!!" 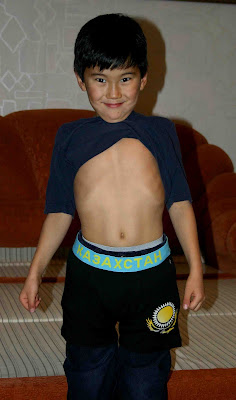 But Josh put them on over his sweats and modeled them anyway. I will not post the other ones which are SO FUNNY as the boys are naked wearing only their new underwear and pretending to be on the catwalk. I will save those to blackmail them wtih girlfriends someday...hahaha!

I wish we could post our first family Christmas photo, as it shows clearly how far we all have come from Day 1. Soon enough though, as court is near!

Merry Christmas everyone! Enjoy your turkey and ham, and think of the Salami Family when you do!!
at December 25, 2009

Merry Christmas to you all, Cindy, and God bless. Your celebration and your family make me smile.
-SusanC in Colorado

Merry Christmas LaJoy Family. All our love from Las Vegas.

Your word as well as digital pictures brought us right in with you. Merry Christmas to you and to your Canadian family.

Thank you for making Christmas special with your postings and photos. You're having a true Christmas and we're all there with you!

Sitting here on Christmas Day thinking of you guys and hoping you are doing well. Looks like a lovely Christmas celebration!! Can't WAIT to see your family Christmas picture. {{HUGS}}

Merry Christmas to the LaJoys! It is very heartwarming to hear how well everything is going. The boys are such cuties!

Thanks so much for sharing your journey with us! Merry Christmas!

You have managed to have a wonderful celebration so far from home!

I have been lax in keeping up on the goings on since being on vacation, but I am SO HAPPY to hear that everything has worked out. Its amazing how such things happen with time and prayer.

Congratulations for all that you have made it though. Merry Christmas to you all!

Congratulations on your court date! This will certainly be a Christmas to remember for the LaJoy family!

To me, it sounds like a piece (or shall I say peace on this Christmas Day) of heaven. I know you're counting your blessings this Christmas!

Oh, hey, wanted to add: I've read about all the fun of Rummikub on your blog for a while now. When I saw it on sale at Target this week, I HAD to get it. Tonight when Ellie goes to bed, the Lathams will start their first game of Rummikub!! Thanks!! :-)

You get to start the new year as, officially, a new family! Congratulations!

Activities: Can you buy jig saw puzzles there? It is an activity that doesn't require language to communicate and is good for cold weather. Or you can make puzzles by pasting magazine pictures onto light cardboard and cutting it up.

Another idea: when a Polish friend of mine was learning English, she had notes all over with the names of things written on them -- I know the alphabet is different, but it might help.

Dear Cindy,
Wow, a court date so soon! Have you chosen names for the girls? I know they are old enough to assist in this process. Obviously Angela is a name easily "Americanized," but does Olesya understand that her name will be very different here and she will often have to teach others how to spell/say it, and that if she wants an American name you could help her decide? From reading other blogs many of the orphanage children know that there is a possibility of a new name and some are quite opinionated about wanting a new "American" name. Just curious, although I know you have been rocketing toward this outcome and probably have had little time to mull such mundane issues over after such a roller coaster ride! Or, is this a decision that was made even before you arrived and just needs to be implemented? Sorry, but curiosity has me, smilingly, asking about the next step! Isn't it awesome that you get to reach these milestones in the adoptive process?
God bless, Sherry

Cindy - Your story almost makes me wish I had adopted an older child a few years back when I was thinking about that. Career has always driven me away from those kinds of choices. I spent so many years delivering families for others. Now self-reflection about future direction - sort of stuck in life at the moment. Your story is compelling to me. Thanks.

how wonderfull. Zeb totally has that big brother shirt on yannik. Whenever we talk about our trip to pick up Zeb...Krack's is always included in the conversation. How fun!
So glad to hear your timeline has been shortened!

We've been away, so late Merry Christmas and happy birthday to Joshua!

Hope you are having a great week with all your children.

Ps. Will you have any news regarding the girls names? Will they want new names?

Easily I acquiesce in but I dream the collection should have more info then it has.