On Court Day Eve we found ourselves with time on our hands and a need to relax. While we have had an amazing and unforgettable trip, "relaxing" is not a term I would use to describe it! Hahaha!
So today, while I laid low with a stomach ailment, the boys all did a little school work and then had some fun!
Near our apartment and throughout the city, there are ice slides that are built, created out of ice blocks and built up fairly high. We have 2 of them less than a block from our apartment, just a building or two over from the Cathedral. Today was warm enough at about 28 ABOVE 0 F (I know, our jaws were on the ground at that as well!) that Dominick thought it was perfect ice sliding weather, so he bundled up the boys and took them over to try it out. 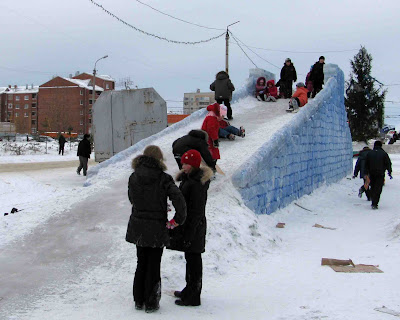 Here is the ice slide, as you can see it is a popular place for kids to hang out! The cardboard strewn about is for makeshift sleds which are quickly abandoned in favor of sliding down the old fashioned way...on your bottom! 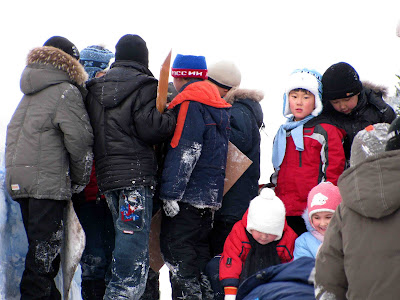 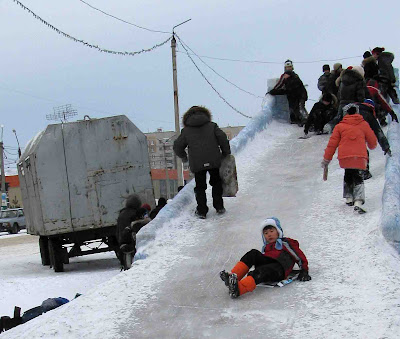 Here's Joshie trying it out. This is the kind of free entertainment the LaJoy's LOVE!! Better than TV any day of the week!! 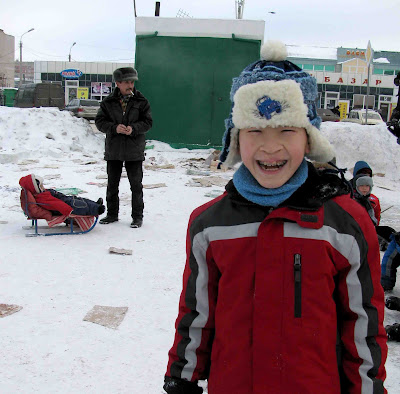 Check out the little one on the sled back behind Kenny on the left. We see kids (and bags of groceries) being hauled all over the city via this sort of transportation. The little ones are so cute all bundled up so tightly they can hardly move! 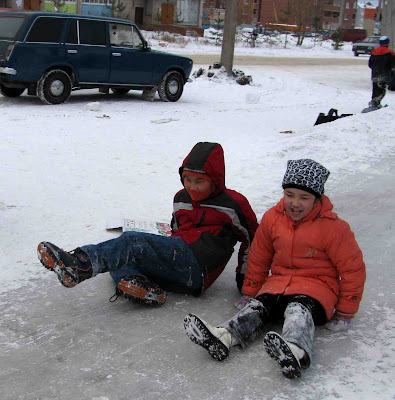 Matthew and a Kazakh Kutie Pie sliding together! 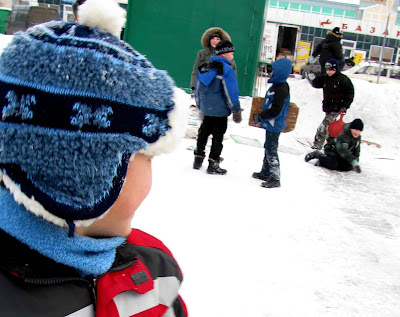 Kenny thinking to himself "Hmmm...I see possible friends there!" 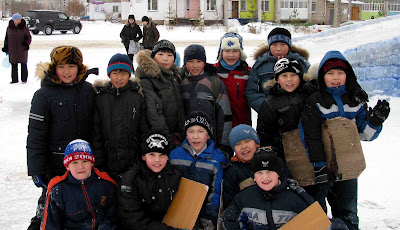 Ever the Ambassador, Kenny had all these boys as new friends by the time they left today! Dominick said one of them spoke very good English and was translating for the other kids. Dominick took out the boys' passports to show them that they were indeed Kazakh and Kyrgyz even though the spoke only English!
I can't tell you how nice it is for us to see our sons enjoying being in an environment where they look like every other kid walking down the street. In Montrose, they are never going to really just blend in the crowd. Here it is Mommy and Daddy who don't blend in! The ladies at Dominick's Store are used to seeing them now and are helping Dominick often when he shops, grinning at me, and when I bought some cookies the other day from a pretty Kazakh woman and was due 3 tenge change back, I indicated she should just keep the change. She insisted I take it, then pantomimed the three boys showing tall, medium and small heights then pointed at the 3 tenge, telling me to give it to the boys. 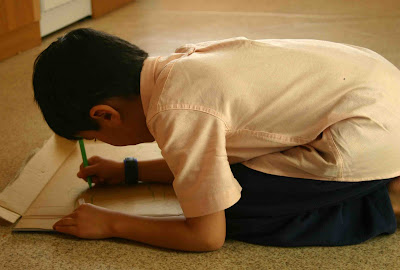 After sledding the boys had some quiet time before going to visit the girls. I stayed at the apartment hoping not to pass on whatever it is that I have so we can all be in good shape for court tomorrow. The boys can't go to court with us and we are so thankful for the Oborn's who have volunteered to watch them even though Jocelyne has been feeling quite ill for the past couple of days herself. 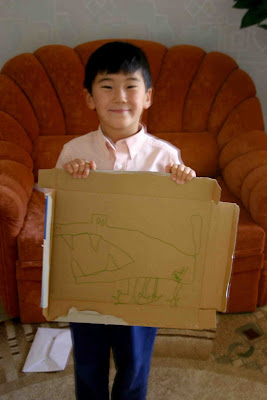 This was the beginning of the artwork, it then morphed into a submarine with a scope, army men and airplanes to be added later!
Matthew was in one picture I took and I was going to show it until we realized he was laying around in his Kazakhstan underwear waiting for his pants to dry after sliding! He has brought $120 of the money he saved the past year working at the restaurant and cleaning the office and has requested we get 3 more pair of underwear plus 3 more in the next size up! He loves those things and I hope when we go to Almaty we can find a jacket or shirt or something with Kazakhstan emblazoned across it for him. He truly loves his birth country! 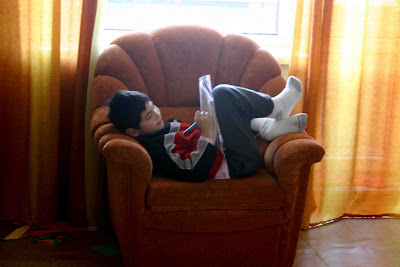 Kenny curled up writing, warming up after sliding. 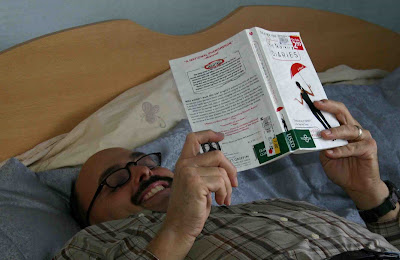 I told Dominick I just had to show this. He NEVER EVER reads novels, preferring reading only for a purpose. Well, I told him he needed to read a couple of pages of "The Nanny Diaries" which I read when we first got here, and he was hooked! I have heard him laughing out loud at times and saying "The sad thing is, this sort of thing really goes on in some families!".
So tomorrow we go to court. Tomorrow, with any luck, it becomes official and we become a family of 7. Wow. A lot of responsibility there, a lot ahead of us, much to think about. We hope court goes smoothly, but even Kenny said this evening over dinner "I am scared mom about court, everything has always gone wrong, what if something goes wrong tomorrow?". I think I sort of have the same feelings and will not feel "safe" until we make it through to the decision tomorrow. We'd appreciate your prayers if you happen to be awake in the middle of the night. If we get a favorable ruling tomorrow, you will hear us all the way back home!!
Good night to all...
at December 29, 2009

Thinking about you all and praying that court goes smoothly today. I'm selfish -- I'm DYING to see pix!! Love how the boys made friends!! The sledding looks fun (although COLD!!!)

Oh Cindy! Love seeing those pics! So cute that Kenny managed all those friends so quickly.....definitely needs to run for office. Praying that court goes quickly and smoothly!

Sending good wishes that you feel 100% better tomorrow and for a favorable ruling tomorrow.
Keep posting and I will keep reading. Only 150 more visits needed!
Kim (usually in Seoul)

I'm hoping and praying for you! Best of luck in court! Hugs!

Hey Cindy, we got some really cool small backpacks at the big bazaar in town. They have "KAZ" printed on them with either the "Hand" or the Kaz Flag emblem for under $5.00. Also found some hats with "KAZ" on them and some gym bags there, all very inexpensive.
Good luck at court!
Love ya,
Laura

Can't wait to hear the good news we are all praying for! I just know the Lord will make it happen!

The pictures of the ice slide are awesome. It looks like lots of fun.

Best of luck in court. I will keep you all in my prayers. I also hope you feel better soon.

Finally! You're almost there! It's the homestretch! Good luck tomorrow. Will be praying for you.
p.s. love the pictures of everything

Happy to be able to add my prayers to those others on your behalf. May everything go smoothly for you.

Hi Auntie, Uncle, Kenny, Matthew and Josh! This is Faith! I love you ALL AND I WILL BE PRAYING FOR YOU TODAY AND ESPECIALLY TOMORROW! LOVE YOU!

I think you are due a "smooth" day! We'll be praying late tonight for you guys.

Cindy - I hope this is really not your last trip there. Maybe you have your family now, but I see much passion about these trips. I think it would be cool if you could all go back and just play on occasion. Here is wishing you a boring day in court! Hope you are feeling better.

Best wishes for your court date tomorrow. Our prayers will be with your family!

Sending lots of prayers and good wishes for court and better health tomorrow!

~Carolyn
Mom to Sadie from Esik and working on #2 Kaz adoption!

Wishing you all the best for a wonderful outcome tomorrow! A prayer will be said at bedtime, tonight for all of you! Eager to read your next post!!!!

You did it! Broke 100K hits on your blog plus... I'm thinking those hits include a prayer for your court date. We'll be keeping each of you in our thoughts and prayers around 0100 MT tonight.

Much love,
Jane and Steve

Oh oh oh!!! I'm so excited for you I can barely contain myself!! Wow, tomorrow's your court date ... feels like it took FOREVER .. and now it's like .. BOOM! .. Right here!! Praying that everything goes smoothly. I'm so so excited for you and your family!!!!

I will be thinking of you the rest of today. And praying that the court agrees the girls' future should be full of LaJoy!

What a cool slide! That looks like so much fun!

We pray every night for y'all! If I happen to wake up during the night another prayer goes out for you. I hope everything goes smoothly with court. I can't wait to see all of the LaJoy's together in a picture!! God bless!

Lifting the LaJoy Family up in prayer! God bless you!!
Oh, and LOVE that Kenny got all the boys together!

Oh my gosh! You are waking up in KAZ about now to begin the final chapter of this journey which will open up the doors to your next journey as a family of 7! I know I will be awake throughout the night as many will throughout the world, wondering and prayering for smooth sailing in court! May it be short and sweet! Much love, Miss Joan

PS - the pictures are priceless! What fun! Miss Joan

And we thought sliding on cardboard was fun on the icy hills around here!

Thinking of you and praying for you.

Looking forward to that new picture at the top of your blog.

TO MARIA - I think we have about 5 more hours to wait for it to be court time in KAZ! I feel your glee and anticipation! Miss Joan

Actually I think it is about 4 more hours until court is scheduled! Miss Joan