Tonight we had 3 nervous little boys on our hands. It was time for their belt rank test, and each of them was working towards a new rank, not just a "stripe" on their belt. Josh and Kenny were both going for their green belt, and Matthew was testing for his blue belt. They all practiced last night, and this morning on the way to school everyone talked about how worried they were about it. So energy ran high in the car as we headed over to class tonight.

Each of them went through their patterns, sparred, and ultimately we came home with 3 new ranks in the car! Sadly, although Matthew did a terrific job, he walked out feeling a little defeated and when he came home headed to his room where he curled up and cried a bit. I knew he was upset when we left even though he hadn't really said anything. Tonight was his first time trying to break a board, and it was a surprise to all of us when he was asked to do so because we had thought we had heard that you had to be 11 years old to be able to attempt it. Well, maybe it is because he started a little younger and is a higher rank before being 11 but he was asked and he gave it a good try, but was unable to do so after 4 or 5 attempts. With a room full of parents and students watching, it was a little demoralizing I think, even though he was 5 years younger than the next youngest person who did it. To make matters worse, although he passed his rank test and was complimented on doing a very good job, they ran out of blue belts and because we won't be back at class for awhile it was logical to give the belt to the other student and order one for Matthew. But I think seeing everyone else get a belt and having him stand there empty handed was what pushed him over the edge. While he was gracious about it there, it was at home that the disappointment spilled out.

And he has NOTHING to be disappointed about! He did a fantastic job, as did Kenny and Joshua. Josh is the second youngest student in the class, and if he stays with it, there is the possibility he could achieve black belt rank at 10 or 11 years old. They all love the sport, and the discipline that is demanded of them there is instrumental in helping them grow and mature. The class had changed this year with a lower age limit of 9 years old, but because Joshua had proven himself to be well behaved and attentive, he was allowed to continue.

Since grandma's have never had the chance to see the boys in action, we had to post pictures! 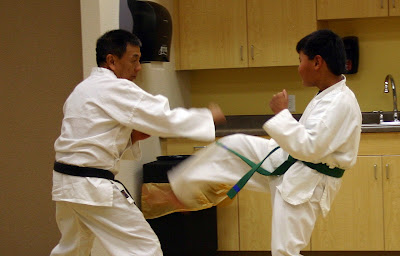 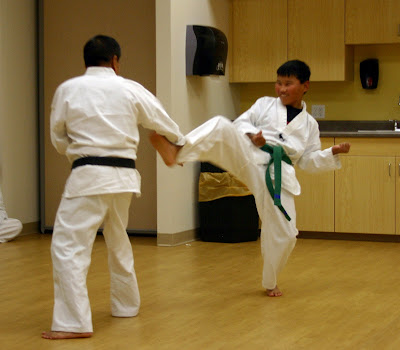 When Did He Get So Grown Up Looking? 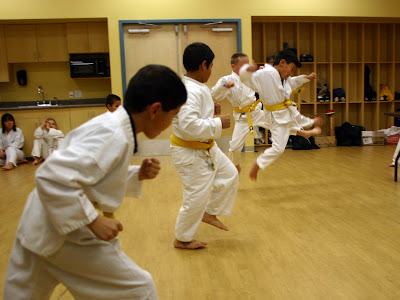 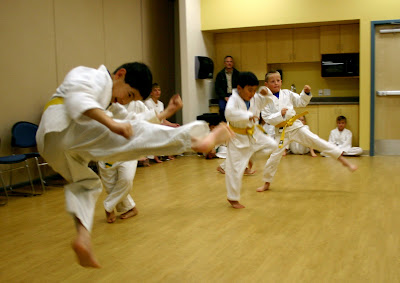 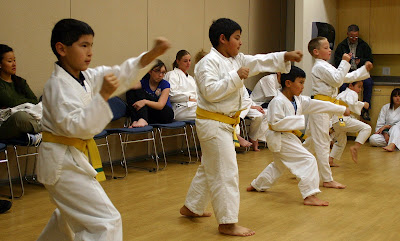 It's No Different Than Playing Superheroes! 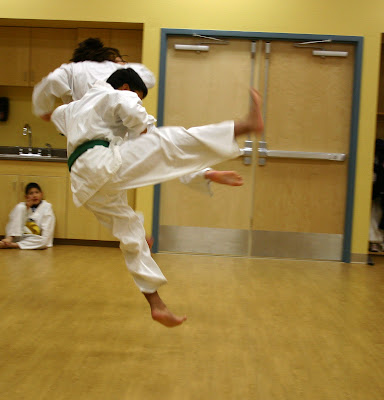 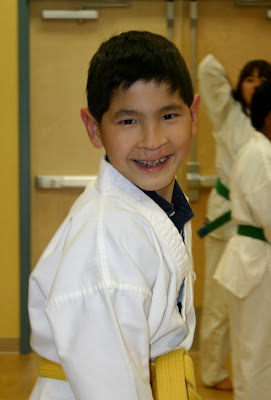 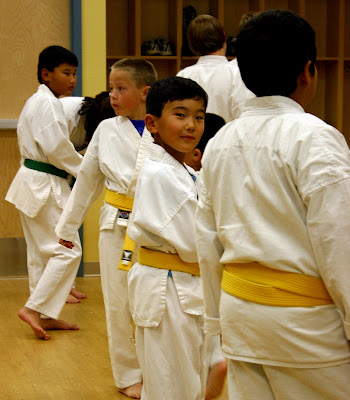 Yea...NOTHING to be ashamed of after just a little over 2 years of participating. Poor kid, I wish he had broken the board, then them being out of blue belts wouldn't have mattered at all!

All the boys looked AWESOME!!! I'm SO impressed with Matthew! The whole breaking a board with my mental attention and committment just wasn't something my ADD brain could handle, so I quite Tae Kwon Do....He'll be there in no time! Rock on, LaJoys!

What a great post! Can I tell you my husband and I were sitting here, watching the video of the sparring, saw the groin shot and started laughing, only to hear you and Dom echoing our laughs! It was almost like we were watching together...but, in the meantime, we'll just have to settle for the electronic equivalent! Love from LV