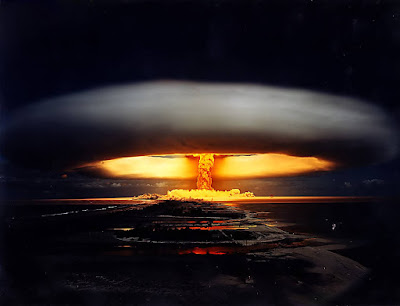 I have mentioned the Boston Globe's "The Big Picture" photo essay web site here on the blog in the past. It is an amazing site where subjects are explored in photos, and we can come to a deeper understanding of events that we are less familiar with. It also manages to humanize those who live in places many of us would never dream of visiting...a face is connected with the suffering or triumphs of peoples from other cultures that are far different than ours.
This past week there was a new essay posted titled "Kazakhstan's Radioactive Legacy". You can find it here: http://www.boston.com/bigpicture/2009/11/kazakhstans_radioactive_legacy.html
The images there are nothing less than haunting and it is mind boggling that anyone would have to live someplace that has been so utterly poisoned. These are graphic photos of the devastating effects of radioactivity on future generations. We are reminded that this is a toxin that lingers, that there are those who have no alternative but to remain in a place where the very environment maims and kills it's residents.
We complain about the restrictions and regulations here in the United States. We laugh at what we often perceive as overkill when the EPA institutes some new mandate that hampers industry. Sometimes there is validity to these arguments, others it is obviously an attempt to thwart the system.
We haughtily argue that trying to stop the proliferation of weapons of mass destruction is foolhardy liberal nonsense. We taunt politicians who do their best to see to it that Nagasaki and Hiroshima never happen again, and we call them naive.
But have you noticed that the vast and overwhelming majority of images we have in our collective memory banks about those terrible bombings are de-personalized? Most often we tend to see grainy black and white photos of rubble where buildings once stood. We see pictures of mushroom clouds rising into the sky in what is almost a poetic glowing brilliance. Once in awhile we might be shown more painful images of burned backs of Japanese men, the occasional face of a child, but we almost never see the true human aftermath and suffering to the degree that it had to exist.
Take a look at these photos taken in Semey, Kazakhstan as the next generations suffer the consequences of the decisions made by prior generations to recklessly endanger human life. They are stark, they are current, that are poignant and terribly, terribly sad. And they are the real faces of innocents affected by the pursuit of nuclear weapons.
I am not one to carry protest signs, I am not all that politically active, but seeing these incredibly moving pictures of the suffering in my children's homeland is enough to make me want to cry. I dare you to see this photo essay and not be moved. It makes me angry that the poorest were treated as meaningless human fodder. It make me even happier that Kazakhstan won independence from the Soviet Union, a controlling power that viewed my sons' people as "less than" for so many years.
May mankind one day recognize that war and weapons of war are not the answer. The lasting impact on generations to come is often not calculated as power struggles are waged in the here and now.
at November 13, 2009

I agree and well said. I think we all need to be reminded more frequently of the "costs" of our decisions.

As we got ready to travel to Semey to adopt our son, we educated ourselves on this piece of their history and its implications (very very scary but we went nonetheless). My husband, who is a geologist, actually attempted to visit the site while we were there but it is still restricted and takes a long time to gain clearance to visit (plus our coordinator decided that it would raise suspicions of working with the CIA or something is an adoptive parent expressed a formal interest in this). It was interesting to hear the locals discuss it in a matter-of-fact way with only a touch of sadness and certainly lots of empathy for the victims. But with no ill will toward the Soviets who presided over these tests.

After living in Russia for a couple of years in the early 90s I will say firsthand that - no matter how much we complain about government regs and lawyers in the US - life without government oversight of basic safety (we still have a ways to go in this country!) and without a civil justice system is not the better situation. Everyday we were subconsciously aware that we could fall into a deep unmarked hole in the road or eat meat that was illegally raised in the Chernobyl area or drink poison vodka that was tampered with... and have absolutely no recourse.

The disaster in Semipalatinsk is one more lesson that we should carry away - and keep pressuring our government and corporations to do the same - that 'progress' (economic or political) at the cost of humanity (and the environment) is just not worth it.

P.S. We did an informal 'survey' of Semey adoptive families (some Semey kids are as old as 14 years now), and there doesn't seem to be an increased rate of illness, cancers or birth defects compared to other groups of adopted children. Our 2 yr old son is healthy but time will tell whether he will have lasting effects.

This is why Kazakhstan and the State of Nevada have a cooperative relationship. Next time you come through, let's hit the Atomic Testing Museum...
http://www.atomictestingmuseum.org/