Because we are currently studying the various political parties and watched both McCain's and Obama's conventions speeches today, I thought a theme of "Yes We Can" was perfect for this blog post! Hahaha!  We watched the speeches over lunch, and it was very interesting to stop it throughout and discuss the things we noticed...the difference in demographics of the crowds at each convention (Kenny observed that the crowds fell along traditional lines...looking more blue collar for the Dems and more affluent for the Repubs), the difference in oratorical style of each candidate (both were given a thumbs up by all the kids, with Obama winning out for "smoothness"), the themes of each speech, the lack of attack yet use of pointing out honest differences on both sides, etc.  It is always utterly fascinating to me how we can turn just about any little thing into a lesson that stretches further than I would have originally intended.  We even discussed the intentional use of lower level language, particularly in Obama's case, and how the average American newspaper is written at a level between 5th and 7th grade.  That lead us to knowing your audience in your writing, and both McCain's and Obama's use of real people and their life situations to make larger points of their platform.

As part of our study, we made posters outlining the differences between the major parties, and each child created something totally unique.  Olesya used photos of people we know to tie them to the parties they belong to or are likely to lean towards.  Joshua chose a more historical/biographical perspective naming famous presidents of the varying parties and the history of the beginnings of each party.  It was so cool to see their creativity show through.

Our study thus far has been really interesting, and we plan to work on a campaign for a local candidate to put in some real life experience.  This may prove important, as Angela in particular is finding politics to be right up her alley and she even said she might like to run for office someday!!  Joshua has also identified himself clearly as a Libertarian, while the remainder of the kids are leaning Independent.  Hmmm...no surprises there at all, is there?  They certainly have their own opinions about issues and are not afraid to voice them!  I'd find it odd if any of the kids ever let a party dictate their stance on any issue!! 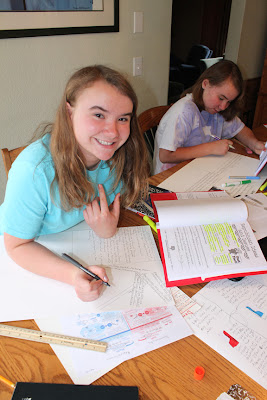 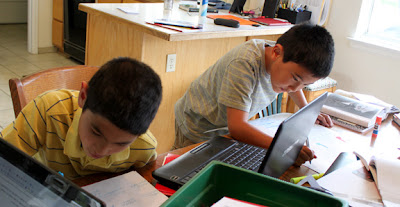 As I am looking toward the future with the kids and thinking about curriculum as Matt hits high school in another year, I am learning that I have gained more confidence and really, really do not want to go with the traditional text book route when possible.  We are using textbooks for some subjects now, but creating unit studies where each of the kids can study the same subject but create "output"at their own level is really exciting to all of us.  The kids read so much, and are learning a lot from researching things on the internet, and often a textbook now seems flat and sort of like "old news".  They'd rather read a "real book" about something.

I was just telling two dear friends yesterday that for our family, curriculum selection is really a huge challenge and more time consuming than I ever thought it would be.  There are just too many variables to think about with the various levels, learning disabilities, etc. that I have to keep in mind.  We just made a decision to change our math curriculum, and that decision alone took well over 25 hours of research to determine what might work better.  Matt is clearly showing issues of some sort of learning challenge with reversing numbers and letters in his writing (we are going to press for testing this school year), and so we wanted a curriculum that would not force him to rewrite every problem before working it.  We also wanted something more visual for Kenny, something providing more basic steps for Olesya and moving at a little slower pace, something Josh could zip through and progress well with, etc.  Also always a consideration is how much individual one on one time is required, as that too has to be considered.  It's enough to make my brain blow a gasket!!

But..."Yes We Can"...and I found what appears to be something that might work really well, one I had considered in the past but the kids blew off.  After forcing them to sit down and take a closer look at it, lo and behold Mom ain't so stupid and they all are very excited to try it rather than stick with the old one which they were thrilled to burn remnants of by the end of the year.  So, Teaching Textbooks, here we come!!

Speaking of "Yes We Can", I didn't have a chance to post photos from the final TaeKwonDo test to wrap up the year.  Matt and Josh were not testing this time, as they will be testing next for either a double black stripe or an actual black belt, and that means they will be sitting at their level for quite awhile in order to master new skills.  Josh is the youngest (by at least 4 years) red belt in the group, and we aren't sure exactly when he will be allowed to move up, as he won't even be old enough to break a board by their rules until he is 11, 2 years from now.  Not sure if he can get a black belt before breaking a board!

So, our three testing kiddos rocked it!

Everyone passed their tests, everyone advanced, everyone believed "Yes We Can!"

And now, on the eve of the Big Test for Mom and Olesya, we are frantically creating frosting flowers for use on our final project tomorrow night for our cake decorating class.  There are many things I often say "No I Can't" to...running a marathon, painting a picture, writing a poem...and I would have added decorating a cake until this past month.  Now, don't get me wrong, it won't be professional looking by any stretch.  It won't even look like a great amateur!  But it WILL look better than ones I have made in the past, because: 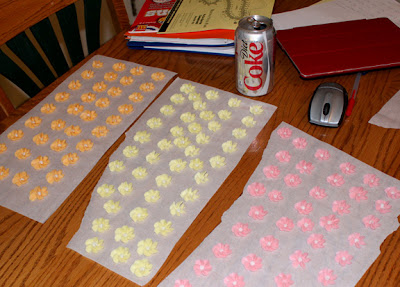 Made by my very own hands...Jill, are you impressed???  Hahaha!  Yodeling is still on my hobby  list, and I have a feeling I might struggle with that one, but these didn't turn out half bad.  Now if I can just transfer them to the cake tomorrow without breaking them, and if I can create something with a decent design on the cake with them, I will be good to go.  And yea, Olesya's looked way better than mine.  Look tomorrow for our final results, and maybe we'll pass the class and be able to earn our certificates!!  Olesya needs to, she already has an order for a French Bastille birthday cake :-)

I'm sure you have already thought of it, but I'd suggest having Matt tested for dyscalculia along with dyslexia. Hope you get some answers and solutions for him.

Another rocker (this one on the porch with a glass of Diet Coke close by),
Lael