Love Wins, The Next Generation 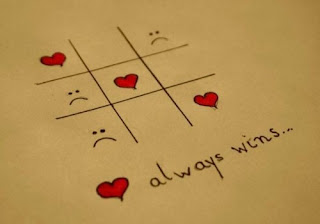 Sometimes, that is a really, really hard one to walk with on a day to day basis.  We humans tend to grab at a chance of getting a good dose of revenge, we like harboring our resentments as if that alone will somehow make it all better.  Then, once in awhile, we find the God place inside of us and decide to let it go, to not take our pound of flesh when the opportunity arises, and only then do we get to experience the difference that love actually makes.  It can be very difficult to love those who hurt us or who have been unfair to us, but if we can manage to do so, extraordinary things can occur.

Three years ago, a couple of months before we were to travel to adopt Angela and Olesya, I had an encounter with a neighbor which I shared in this blog post:  http://lajoyfamily.blogspot.com/2009/09/after-day-to-calm-down.html .  It was extremely unpleasant, and bothered me for days afterward.  Ultimately though, I elected to just set it down and walk away from it.  It was actually one of the very few times in my life when I have been able to do so fully, with absolutely no desire to drag it along and use it fuel my own righteous anger.  It seemed at the time that finally some of that whole Jesus stuff was sinking in, and I was surprised to discover how much better it felt not to allow bitterness to run through me every time I pulled on to our street.

Time passed, the girls came home, and it was only a week or two before that very same neighbor came over with a spare used bicycle, saying "I figured with all these kids you might just need an extra bike from time to time".  It was his peace offering, a very kind way of acknowledging that he had spoken without thinking.  I wonder today what would have happened had we decided to turn that into a war.  Would the kids have missed out on ATV rides, special treats "just because", the welding of a basketball rim that was broken, the very thoughtful Easter baskets and Halloween goodies prepared especially for them?  Would my own desire to "pay back" thoughtlessness with ongoing anger have kept us from the opportunity to serve our neighbor by raking his leaves as a surprise when they were gone?  Or from hanging out and visiting in the front yard as he cut down a tree on the same day as we were studying trees for science?

But there is a little bit more to the story, as Love Wins carried even further...

This evening Dominick was approached by two of our male neighbors, the one with whom I had the uncomfortable encounter and another.  Both are older, both are not very close with their own children being of a generation when men traditionally left child rearing to their wives as they went about earning a living.  Both were deeply touched and surprised to have received a special Father's Day card...from Angela.   We had no clue she had created beautiful cards and hand delivered them Sunday afternoon while we were visiting with friends.  She had disappeared into her bedroom saying she was just drawing, and she was in and out of the house occasionally as all the kids were.  It seems she had a special delivery to make, one that clearly will not soon be forgotten.

Here is the girl whose arrival in our lives so disturbed our neighbor that he simply couldn't keep from voicing his opinion, reaching out to him to let him know how much his presence in our life was appreciated by that very girl he thought shouldn't come home.

Funny how when love starts, it is like Niagara Falls and almost impossible to turn off.

Sometimes, it takes acting out of love even when you don't feel it.  Sometimes it takes overlooking the failures, inadequacies, and outright wrong actions of another.  Sometimes, it may mean shutting your mouth and not carrying something forward when you actually do have a choice to let it go.

I am not perfect, that's for sure.  I have held grudges far too long, I have spoken with great rancor at times.  I have been terribly thoughtless...and I am sure without even realizing it because I was so self-centered I wouldn't be able to discern it.  I can out argue anyone who pushes my buttons, I can go toe to toe with someone who ticks me off.  I have wronged others, and I have failed to apologize.  But over time and with practice, I am beginning to get the hang of this love thing.  I am seeing fruit from acting differently, and maybe it will serve as a muzzle on my mouth if I can quickly recall this situation and how much differently things turned out than they might have if I had responded angrily instead of lovingly.

There are two men, fathers each, who are feeling a little differently about themselves tonight as well.  They are perhaps seeing themselves through the eyes of a young lady who elected to put aside any of the negative and reach out with words of care and gratitude.  These men who were not with their own children on Father's Day were remembered and reminded that they were father figures and grandfather figures to others when they didn't even realize it.

And as I go to sleep tonight, I will do so with a smile in my heart as I think of Angela laying in her bed down the hall...and how fortunate we are to be called Mom and Dad by her.  That heart of hers continues to blossom, the scales have fallen away and have washed down stream.  She has learned the lesson well, and at a far younger age than I was.

Awesome story to read of forgiveness, loving when not feeling it, and the warm heart of a young lady who has touched some hearts that may be hurting more than these men might be able to acknowledge.

Way to love as Jesus loves, Angela! She is learning so much about what God truly wants for each of us...becoming more and more like Jesus.

Nancy in the Midwest

I visualize each of us with a backpack that we carry 24/7 throughout our lives. As we move along life's path we fill the packpack. Sometimes we put in great rocks of hatred, stones of anger, pebbles of resentment, sand of irritation. Each of those things makes the pack heavier and heavier to carry. For some there comes a day when we decide to make a rock garden with all those rocks, stones, pebbles, sand. We empty or lighten our pack so that we can fill it with the lightness and light of love.

Of course, we may come back time after time and pick one of those rocks or stones back up thinking it is pretty or necessary and place it back in the pack. Then when we get tired of carrying it we put it back in the garden where time and weather can cover or erode it.

Love, joy, compassion can fill, lighten, and lift that pack. I visualize you and Angela as having very light and lifted packs.

I think I'll go see what is available in my pack to add to my garden.

Thanks for the beautiful blog and the reminder,
Love you,
Lael

Love this post! But at the risk of getting boos from you and your readers, I'd push it a bit further. I just read your 2009 post, and I'd say there may actually have been genuine concern in his rant. No, doesn't excuse/condone the rant. And, obviously, I wasn't there so am in no position to judge. It just struck me that at the root of his recklessness could have been genuine fear and concern . . . he just expressed in in a way that it could not be heard. Heck, he may not have known it himself! Love . . . so simple and yet so complex.

A wonderful story/testimony. A sweet girl.

Beautiful, just beautiful! What a blessing your family is to so many. I really needed to read this post tonight. Thank you for sharing! :)

I hope you see this.

Thank you for blessing us with your own insights and wisdom, grace and love, that you so generously add to Cindy's posts.