Holiday Fun and More to Come...If You Help!

Here are a few photos of our trip to Salt Lake City.  While all then kids are very excited, it is Olesya who is most into the whole thing.  She just brought me a letter she wrote to Santa that brought tears to my eyes..."I want anything you bring. This is my sister and I first Christmas." was part of it.  Now off to mail it to the North Pole tomorrow. 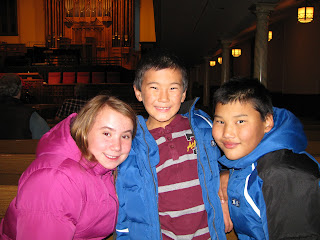 We heard music all over the Square, and were it not for antsy kids we would have listened to a concert in the Tabernacle.  Although I doubt we will go every year, this is our 3rd trip over the Thanksgiving weekend and we might make it an every other year tradition, as it really gets you in the mood for the holidays in a meaningful way.  Temple Square was packed with cold but smiling faces, and the lights never fail to impress. 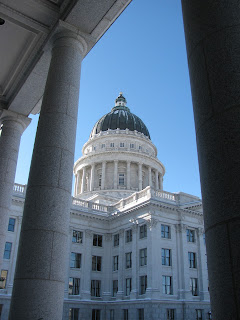 While waiting Monday for Matthew's appointment at Shriner's, we decided to fit in a little school and sightseeing. We hadn't planned it, but we drove up to the State Capital and were going to peek inside. When we did, we were approached and told a tour was just beginning and asked if we'd like to join, so off we went on an unplanned adventure.

Wow, was that building stunning! We learned all kinds of neat facts. Looking straight up into the dome from the floor you could see a sky scene in which seagulls, of all things, were prominently featured. We were told an interesting piece of Utah history as we learned that the seagull was the official state bird. This is due to the fact that seagulls saved the first Mormon pioneers when they gorged on a plague of grasshoppers that threatened newly planted crops which would have been the only food for for the winter. 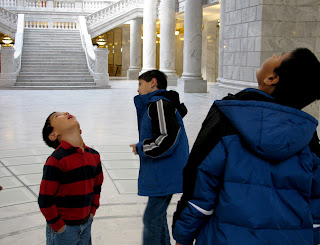 Georgian marble was found throughout, and we had fun searching for the beehives incorporated in the decor in various places.  The murals throughout were truly magnificent and depicted Utah history in various scenes. 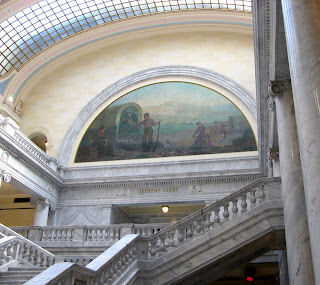 I was surprised by the kids who were quite interested throughout the hour long tour.  They all seemed to enjoy it, and asked questions of our guide to learn more.  There were lots of hidden surprises though, little known facts that kept them engaged and actively participating.  The tour guide showed them a specific marble floor tile that appeared to have the image of Queen Elizabeth on it, and explained all the symbols incorporated throughout the building.  My only regret was that I didn't bring in my big camera and ended up using a small digital camera of Matt's which has a lot of background "noise" when the pictures are blown up.  Man, I am so picky when it comes to the photos!  Too picky... 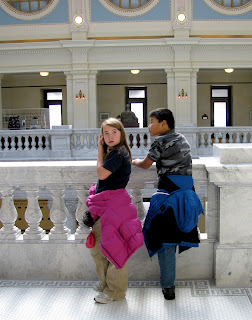 Looking at these ever-growing bodies from farther away, I am always surprised to think they are our kids...they look too BIG to be ours! Hahaha!  Childhood recedes so quickly, doesn't it? 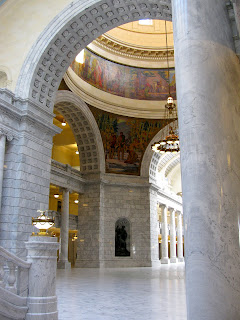 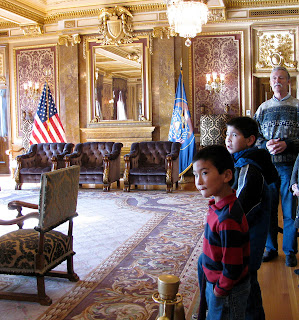 The Gold Room for receiving visitors intrigued Kenny and Josh the most, and it was quite a beautiful room.

I love everything about homeschooling, but I especially love surprise moments like these where we are not expecting any learning at all and POW, there we are, smack dab in the middle of it totally unplanned.  December will be "school lite" for us as we have more fun than work thanks to working through the summer.

However, I may be hard pressed to get Kenny's hands off a book...that boy has ROCKED it lately!  He got hooked on the Reading A-Z mysteries sent to us by our friend, and read 2 of them in 1 day, which for him is a huge accomplishment...and he read them much faster than usual.  I felt all along that one of the reasons he was not reading more fluently was a simple lack of time to practice the skill.  While we are working hard on basics still, he has far more time without homework and with a more appropriate approach to class work, and as I had hoped he is filling a lot of that time with a book in his hand.

Angela just this week got turned on by reading, as she has discovered Amelia Aerhart in earnest and read two books about her, one at a fairly high level.  She then moved on to Rosa Parks and I now know firmly how to "grab" her.  She likes biographies of smart, scrappy women.  Shhh....don't tell her...we got her a Biography Channel movie of Amelia for Christmas, she will love it!

And as we think about gifts for our own kids, I can not ever forget those kids left behind.  Kenny's friend Emir still waits for his family in Kyrgyzstan, and Isaac as he is called by his waiting family will once again have no Christmas unless we all do something about it.  2 years ago, you might recall that our family issued a kooky challenge...a pie in the face if we raised money for John Wright to provide Christmas to the Kyrgyz orphans near him, which included Emir.  The tradition continued last year without the LaJoy family due to our adoption situation, and thankfully others who read John's blog took up the challenge and carried on.

But it's a new year, folks, and there are hundreds of kiddos whose lives, particularly this year, have been impacted further by the unrest in Kyrgyzstan. Where there was little to go around before, there is even less now.

So, I propose this to our blog readers.  I know no one has extra money this year as we are all belt tightening. But can you give up one small thing daily for a week and contribute that money?  Can you give up lunch out for just one week or a Diet Coke or Starbucks a day to give a child the gift of feeling cared about?  It really isn't so much about the gift they receive, it is about knowing someone cared about them.  I know first hand what that can mean to a child, how every little kindness is appreciated regardless of whether they ever meet you or not.

In the spirit of Advent and in this season of giving, we want to give something back to you.  If you go to John Wright's blog and donate in the name of the LaJoy's, we will take a pie in the face for you and post the video on the blog.  Our goal?  5 kids...$500...each $100 gets a Little LaJoy, beginning with Angela and Olesya who need to be indoctrinated first :-)  But seriously, we'd love to be able to pelt ALL the LaJoy kids with a pie in the eye, so can you help us?  More importantly, can you help children who remain faceless and nameless to you?  John will post photos of the results of your giving, and nowhere else can you get as big a bang for your Christmas buck.  What's that?  Do I hear you saying "What about the BIG LaJoy's?  It's not fair for the kids to get plastered and not the adults?"...hmmm...well...you'll just have to dig deeper if you want OUR faces covered in cream :-)  Another $100 each and Dominick and I get it from the kids.  Remember the giggles last time?  Check this out...http://lajoyfamily.blogspot.com/2008/12/ok-folks-heres-what-you-have-been.html .

If you feel a nudge in your heart to donate, go to the Wright's blog and click on "donate" http://actofkindness.blogspot.com/ and do so in the name of the LaJoy's, knowing you have done what many will not...you have seen the hidden ones in our world and offered your hand.
at December 03, 2010

I just donated a dollop of whipped cream! I didn't know giving could be so, uh, delicious!

What a gorgeous capitol! That's a once in a lifetime trip. We live in the capitol of Georgia and I'm ashamed to say I've never taken the kids down there. My bad.

I made a small donation to the cause. I wish it could be more. I'm going to link to it and try to get some more donations going.

I hope Team LaJoy will get an opportunity to visit many more capitols. Ours here in CO is a fun one to visit and then you can also take a tour through the US Mint.

Donation made. Now can I bake the pies? All seven of them. If it goes over that number, I know a few of your blog readers that live here that might be willing to take a pie in the face.

Olesya's Santa letter is so precious. Oh if all children could say that!
Thanks, Cindy, for being a part in making sure our Isaac has another Christmas celebration.
PLEASE e-mail me info on the hooked on reading! Do they have every level? Temima really struggles!! Love you, friend :o)