Every once in awhile, we learn that the way we handled something was indeed the right way, even if we had strong doubts about it initially. This week has sure been a learning week for me!
After having had a bit of a "hit and run" with our neighbor a couple of weeks ago, I had a lot of thinking to do. Was I wrong in not standing up for our family? What kept me from firing back after being down right attacked? Was it maturity that helped me realize it would be pointless? Was it discomfort that kept my lips sealed? I kicked the conversation around over and over again in my mind, and ultimately felt that handling it the way I did without anger or raising my voice was best...even if I didn't get the momentary sense of victory at "ripping someone apart".
As I had said in my previous post, this couple HAD been nice to us off and on over the years, occasionally going out of their way to assist us with some small task, being kind to the boys at Christmas/Halloween/Birthdays, etc. Despite their nosiness, cantankerousness and comments made in ignorance, these are not people I hate (I actually don't hate anyone) even if at moments I can sometimes become annoyed with their outspoken opinionated attitude. This time though I felt they had stepped way over the boundaries of annoying neighborliness, but elected not to further compound the issue by creating a much bigger deal out of it than need be.
This week, guess who stood on my doorstep on two different occasions with trays of baked goodies to be shared with our family...including little miniature cakes with chocolate eyeballs stuck in the middle for the boys. Yup, our neighbors...the ones who attacked me in the middle of the street yelling about our personal decisions for our family. The ones I decided not to yell back at.
And guess who also spent almost 2 hours helping Dominick try to figure out what is wrong with the heater in our "new" van? Yup, our neighbor.
Do you think that finally at 43 years old I am "getting it" about grace? Even in a small way? Not only did keeping my mouth shut manage to maintain a neighborly relationship, but maybe in some small way my mild response was heard and although the words "I'm sorry" will never be spoken, this was a peace offering in the form of tasty treats and selfless service.
Thanks God for teaching me so much, even if it took years to learn it. My mom will NEVER believe I was able to hold my tongue like that!! I sure couldn't as a teenager :-) And this lesson taught me the value of doing so.
Now...what can we do for them in return??? Seems like there are a lot of leaves over there that need raking, like we did last year :-) How much nicer it is to contemplate doing something kind than it is to wallow in anger. 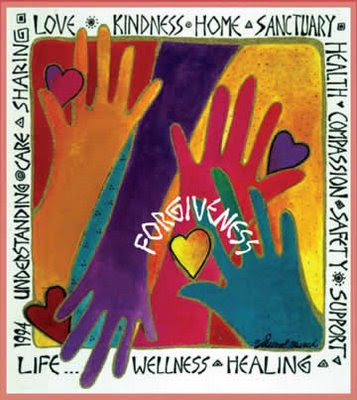 What a beautiful thing to hear that things have worked out. Hooray for good will and loving your neighbor despite things they may have said (and shouldn't have said).

And next year there will be 5 kids to help rake leaves!

It looks like all that nonsense of the other day, was his way of saying: I love you and I'm worried about you guys...

Ps. Also waiting to hear your good news.
PSS. Glad you liked the t-shirts we sent for your girls!!! The boys looked amazing :)!

You're a better woman than I am Cindy.

I love hearing little stories like this. Being a christlike example always wins!! People really do notice even if nothing is ever said.What a wonderful thing to share with your children.

I thank you for yet another lesson.

thanks for the reminder!

If I hold my peace and let the Lord fight my battles , Victory shall be mine...