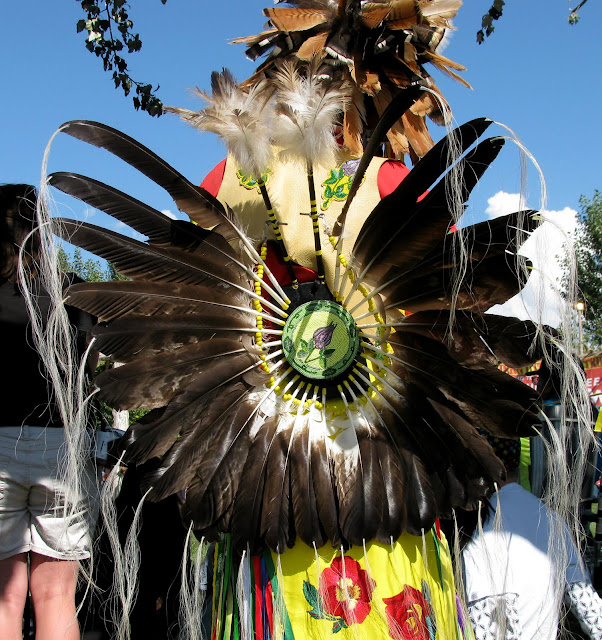 Before leaving for my retreat on Friday, Matthew and I made his study on Native Americans come alive by visiting a local Pow Wow with some of his homeschooling classmates. This was our first venture out with anyone and we had a really good time!

But what excited mommy most was using my new camera for the first time, and man, was I thrilled with the results!

I received some birthday money from my Mom and mother-in-law, and decided to use it to purchase a small pocket sized digital camera for our trip to Kazakhstan. As most of you know, I love taking photos although I am quite amateurish, and I usually haul along my big old Canon digital SLR Rebel. I have always been quite frustrated with the shutter delay on the smaller digital cameras, and rather than buy one and throw it across the room thereby making my purchase a financial fax paux, I had just given up on ever having a smaller camera to tote around.

But knowing how much stuff will be crammed in backpacks and carryons, and wanting to keep it lighter, I decided to do some research and see if there was some newer technology out there that I might find less frustrating and lighter to carry around for weeks on end.

I found a Canon SuperShot SX110IS online and reading the very positive reviews and how others said it was a good substitute for SLR lovers, I decided to see if I could check one out in person. We found one at our local Target, and made the counter person dig out a memory card for it so we could give it a real try. WOW! It actually DID have minimal shutter delay! And it is in the "super zoom" category which also meant we could take pictures of locals in Kazakhstan inconspicuously which would really come in handy. But wouldn't you know, it was discontinued and the display unit was the last one they had. Dominick gave me "the look", which is the signal for me to walk away because he is going to try and bargain and I will totally blow it because I will be embarrassed and ruin the deal.

Thankfully I stayed away long enough...Dominick talked the clerk into giving us a 30% discount!!! Yippeee!! The camera had only been on display less than a month and in our small town that means it hadn't been handled all that much, so we were not too worried about it.

So as a test run I took it to the Pow Wow Friday. It was SO nice to have something that fit easily into my purse. But it was when the action started that a gleeful giggle escaped my lips. We were easily 60+ yards from the action when they started dancing, and not only was the camera able to capture some great images they were nice and clear as the image stabilization feature really kept the blurriness down even when zoomed almost to the max. Below are just a few samples of the pictures I captured which Matthew wants to incorporate into his lapbook: 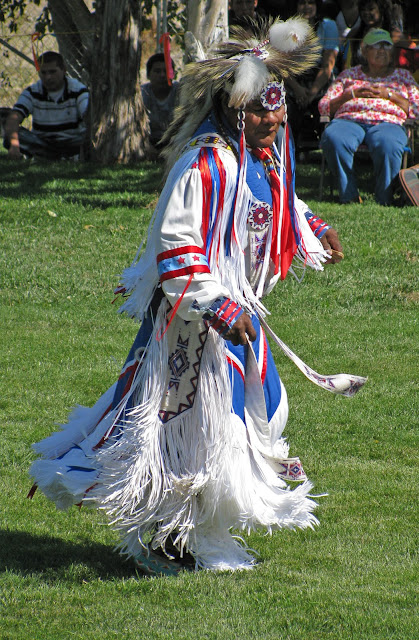 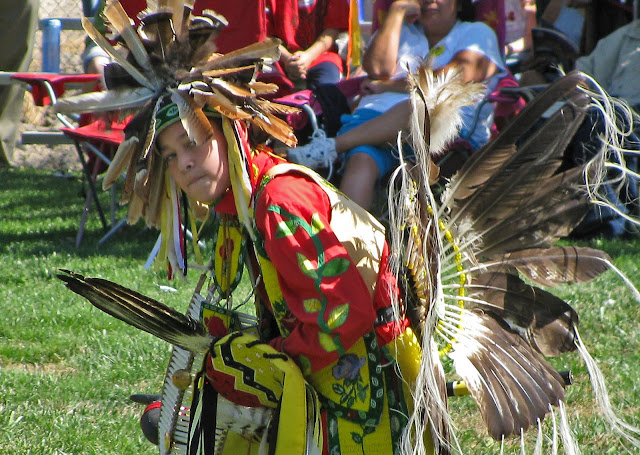 Incredible to me that these came out so clear...clear enough to see faces well and this is cropped quite a bit too...and I was EASILY 50+ yards away!!! 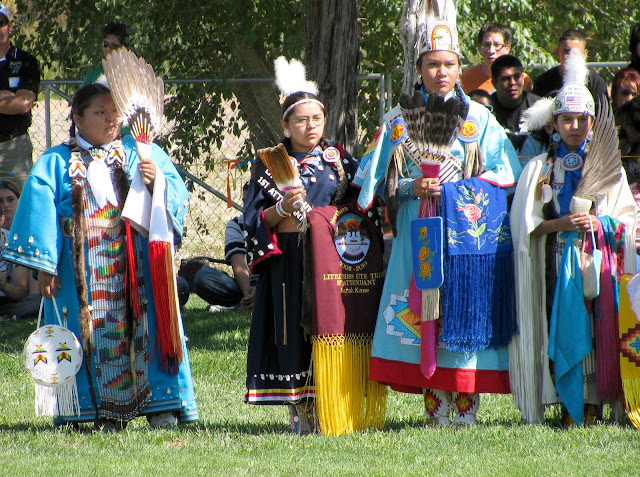 And this one I was more like 70 yards away...and this too has been cropped by about 1/4. 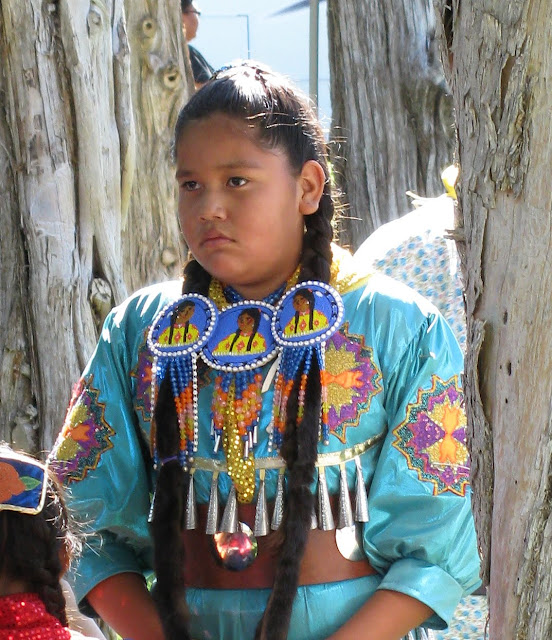 I was maybe 20 yards from this young lady and the photo was cropped about 70%. The colors are stunning and the clarity is awesome!! I didn't do any photoshopping of this one at all other than cropping, so what you see is the real deal in terms of exposure and color straight from the camera. Have I said I love this camera yet? 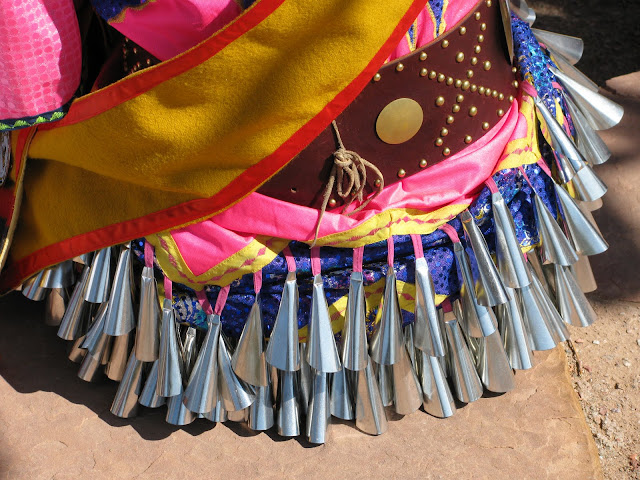 OK...so this is not that far away, although still maybe 10 yards or so...and most would think this is a dumb shot but I love the more abstract views even though others often don't.

So overall, the trial run was awesome, and the shutter lag was very minimal. I caught shots I never would have caught with a standard pocket digital camera. Canon really stepped up to the plate and hit a home run with this little baby!

Now tell me why it is that I can't get this excited over a hairdo or makeup? Ugh! I am such a non-chick!!!

This camera is going to take phenomenal pictures in Kaz, and I hope I am blessed to have the opportunity to shoot some really interesting and unique things while there.

So a room may not be ready, we may not have a stitch of clothing for them, but hey...priorities, right? We'll have some fantastic photos!!!! Hahaha!!!

You will be the coolest, jumperless, home school mom EVER!!

Awesome pictures! I don't blame you for being excited.

These are WONDERFUL photos! I have been to many pow-wows in North Georgia, and they are lovely events. My great grandmother was Cherokee, so they are fun but also emotional to me. Did you get any nice crafts items for sale?? I have found the crafts items to be realli inexpensive and well-made at the ones around here. Hope y'all go to many more!
Dee

That camera ROCKS! The pictures are great and I bet the experience was even more awesome!

Wow, I'm jealous. I may have to look into that camera for the next go around. And I love your "abstract" shots!