I originally sat down to create a post which would have been written out of anger, and have erased it after having spent a half an hour venting. I need to cool off and write it later tonight or tomorrow when I am less venomous.

So instead you get pics!

We have yet another adventure going on in our home. "LaJoy Boys Services" has begun operation! I was approached by a friend about a part-time cleaning job at the "Dolphin House" which is a local child advocacy center housed in a beautiful older craftsman style home which coincidentally used to belong to friends of ours from church. I was so grateful for the chance to have a little work that would be flexible and would help bring in a little extra money. Then I got to thinking about it, and knowing that my friend who approached me about it would be OK with it, I sat down with the boys and asked them if they would like to have their own cleaning company and have their first client. The looks on their faces was so cool when I told them what they could earn, and that they could split the money. They had been talking about finding jobs raking leaves or pulling weeds to try and earn some extra money, so this was almost a dream come true!

I explained they would have to do the work themselves (with Mommy helping and supervising, of course), that we would open a bank account for them, that they would have to bill their customer themselves and take care if all expenses. We also laid the ground rule that whatever was purchased would have to be agreed upon by the "company" and be shared equally, and have approval of Upper Management (the Bigger LaJoys). With this money they will have to pay for any extras they would like, such as movie nights out, special activities above and beyond what we would normally provide, etc. For example, if they would like to go to the Hot Springs pool which we can afford only on a rare ocassion, they could withdraw money and pay for it themselves. In truth, it will cover exactly what it would likely cover were it to go into our household account...the extras we can't always afford. So why not let them take ownership of it and let them direct how it is spent and learn to save it?

We thought this was the perfect opportunity to hone their entrepreneurial skills as well and have them learn more about budgeting and finances. Kenny in particular is highly likely to own his own business one day and this will allow him to "get his feet wet" and try it out on a baby scale. Both Kenny and Matthew proved their mettle this past winter when they stepped in to replace an employee who left us midway through the season, as they worked every Saturday for 6 or 7 weeks voluntarily and did a great job busing tables, getting drinks, hauling trash, etc. so we felt this was the next logical step for them. They each saved the vast majority of the money they earned so they can have spending money on our adoption trip, and they even shared a little with Joshie. So we feel fairly confident that they will make wise decisions...and if not they will learn from their mistakes.

Here is the crew, ready for action! 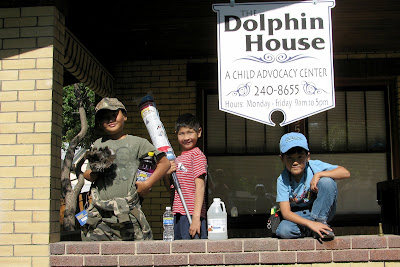 We spent 3 hot, sweaty hours on Saturday afternoon cleaning, from floor to ceiling. The building needed a good initial mucking out and then it will be much less time each week. They mopped, they vacuumed, they moved furniture and dusted and did windows, they cleaned toilets, they scrubbed sinks. When all was said and done it looked pretty darned good...and they felt like they were very grown up! I asked in the car on the way home if they thought it was going to be worth it, and they were already calculating up how much money they had the potential to earn and were deep in discussion about how best to spend it, or what to save for.


After a quick dash home, it was off the the local Corn Maze with out tiny church youth group which this time around also included Kenny's best friend and brother and sister. The Bomb (aka the 15 passenger van) was loaded to the gills as we pulled up to the Maze and all piled out. I'd love to show you a photo of our little motley crew but I purposely do not include recognizable photos of others on the blog out of respect for their privacy...but I did get one with all heads turned the other way and Dominick attempting to guide us all through the Maze! 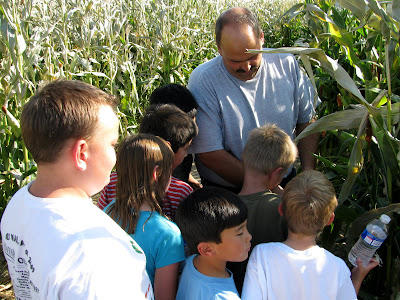 Our littlest member was napping in the car while Mommy stayed close by and watched. We all had a great time wandering around in the corn. It was not at all a new experience for Kenny's buddy and his siblings as their Daddy is a corn farmer!! Afterwards the Bomb headed back to our house for a dinner of pizza and s'mores cooked over our outdoor fireplace while kids played hide and go seek and jumped on the trampoline. It was one of those wonderful warm fall evenings that we won't have many more of.

And finally, I just had to share Joshie's missing front tooth! 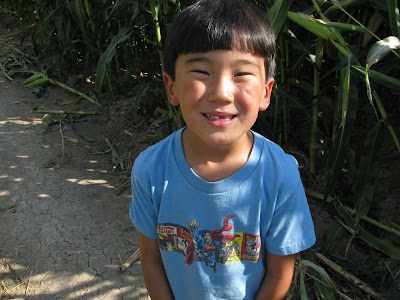 You are so creative-you're going to raise such successful children!! Successful in every way possible.

What a great opportunity for the boys. You provide such great life lessons for your boys. I hope they continue to enjoy it and enjoy the fruits of their labor.

You are an amazing mother and a great example! What a tremendous job of grabbing a "teachable moment" for your kids!

I think you have a beautiful family. Someone told once that when someone goes off unprovoked it has more to do with him and his stuff and not you at all. In this case, maybe they have little to do but over-analyze everyone else's choices...maybe a little guilty they don't have a more interesting life themselves. It sounds like more of a defense even though it was offensive.

I almost think you ought to have mirrored it back to him and see what he said when he heard how bad that sounded.