These "lazy days" of summer haven't been so lazy around here!  Take a look at a DIY project Olesya and Josh were helping Dominick with: 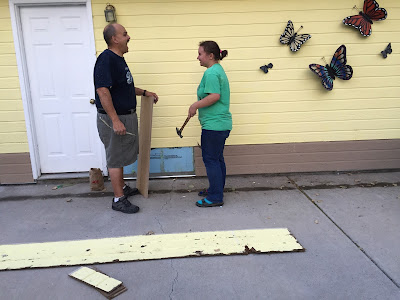 Water and snow had damaged the bottom of our siding in our patio area, so it was time for our Handy Men and Women to go to work! 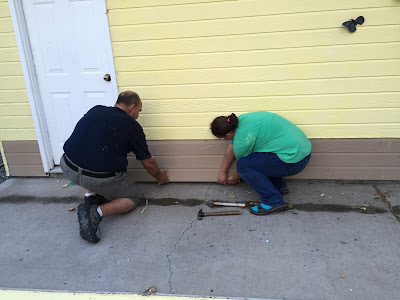 Olesya is so much like Dominick in many ways.  She truly enjoys more physical tasks, and loves things like detailing cars and working with her hands. She is also far more domestic than her mom (I totally admit that one!) and is a happy explorer in the kitchen, trying new recipes. 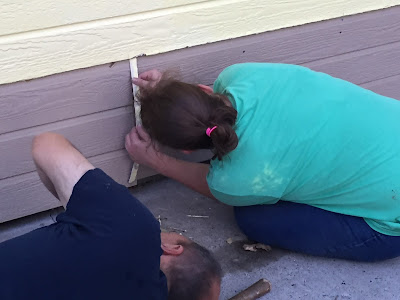 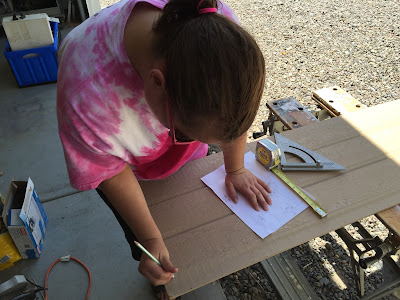 With Dysclaculia, a math disability that makes math concepts far harder for Olesya, using basic math in real life situations helps her gain a greater understanding of certain math skills.  Measuring and cutting helps with fractions, something that still stymies her. 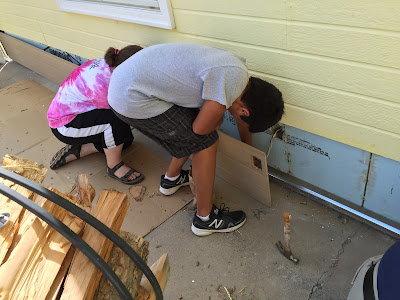 Josh came long and provided labor as well, and learned how to use a caulking gun in the process.  Metal flashing was also installed beneath the siding. 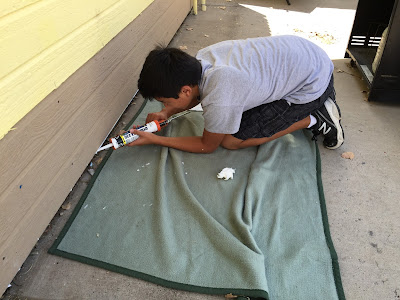 Having such willing and eager helpers makes life so much easier!  While Matt and I were in Salt Lake City the next couple of days, and Dominick was at work. Kenny, Angela, Joshua and Olesya all repainted both sides of the house where the siding had been replaced.  A few years down the road, it is rewarding to watch as the kids put into practice some of the practical skills we have taught them on various projects, like the rental rehab we all worked on about 4 years ago.

Matthew and I were in Salt Lake City at Shriner's Hospital to have his back checked.  He is having considerable pain, with numbness and tingling as well shooting down his legs all the way to his feet.  Though he was in pretty good shape a few months after his spinal fusion, something has caused a shift and he is in constant pain right now, and his life is quite limited.  He is trying to be as active as he can be, but that is proving very difficult.  Sleeping is not restful, sitting is hard, bike riding can be done but brings on pain fairly quickly.  Xrays revealed little, so an MRI is being ordered and we will hope that answers will follow.

It isn't slowing him down in other ways though, here he is working on his 3D printer in his recently created work space in the garage.  He is making good use of his Creative Space, and spends many hours out there doing things I don't understand with parts that I have no idea what they do...hahaha! 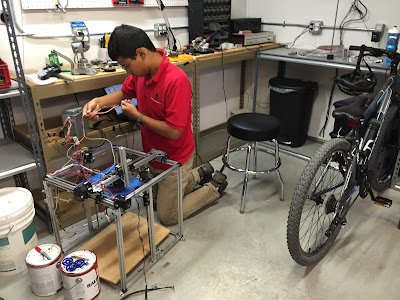 We have been crafting Matt's senior year in high school, and he has asked to take both Pre-Calculus and Trigonometry as he is seeing the need for it in the work he is doing on his own.  We also found an awesome resource for him which will teach him all he needs for a wide variety of IT certifications in all kinds of content areas for tech...when I asked him what he wanted to focus on for career learning post high school, he quickly responded, "Everything...every single thing I can find to learn.  I have no idea what I want to do yet, but I find it all fascinating and none of it boring, so can I learn it all?"  Yea, that didn't help so much, what does "all" mean?  Ummm...according to Matt, it includes, but was pointedly not limited to, "Networking, Cloud Storage, Mobile software, repair, Windows certifications, Cisco certifications, Amazon Web Services, and...anything else I can think of.  Oh yea, and drones, and GPS technology."  He will start with a fundamentals course for COMP TIA certification, and work his way up the list, I guess.  That ought to keep him busy for awhile :-) 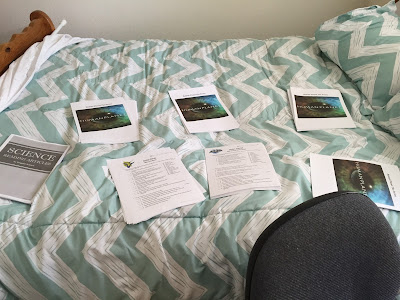 Aside from driving hither and yon all summer long, I have been compiling resources for our coming school year.  We are going back to a bit more eclectic approach for science, as the textbook was a big fat flop for us for retention this past year.  Sooooo...back to the drawing board, and I decided to use videos from the BBC series' Life, Planet Earth, and Human Earth along with tests I found online in various places.  In addition from Teachers Pay Teachers I found a wonderful series of science articles based on current topics along with thought provoking questions.  We will see how this works.  We have a tremendous amount of work to cover next year, and a lot of fun and interesting things to learn!

Angela has been working diligently on all kinds of Russian translation with Olesya, as well as tending her lovely flower garden, so I have beauty in vases often right now: 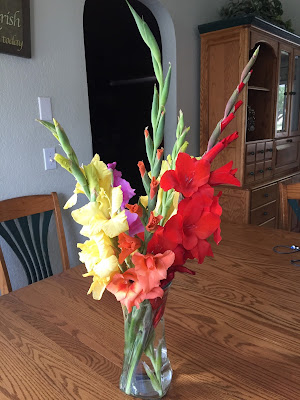 We have had my friend Candi's two kids visiting us throughout the summer, with Christi coming first, then Billy.  It was such fun having them with us, they were a joy and contributed so thoughtfully to conversations we had, helped at the store, and just hung out and relaxed.  We did a little mall hopping and sight seeing with each of them, though mostly we just lived life together: 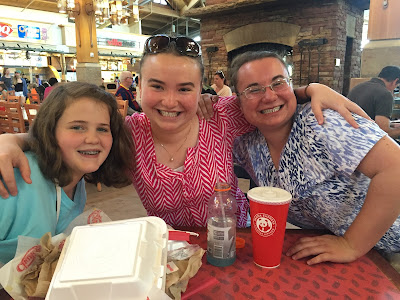 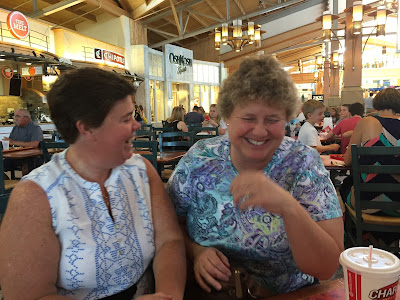 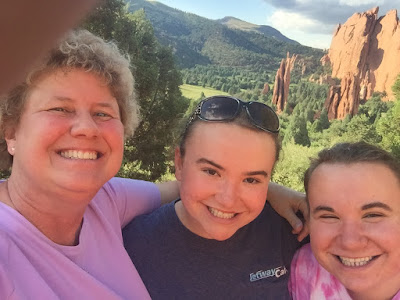 Love my sweet, sweet daughters so much...and yes, you can tell I am not good at selfies and keeping my arm out of the shot! 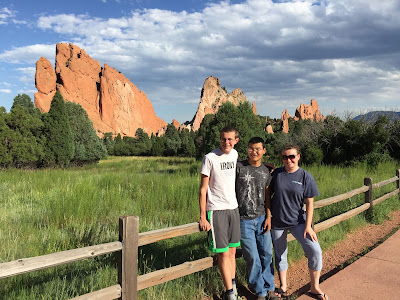 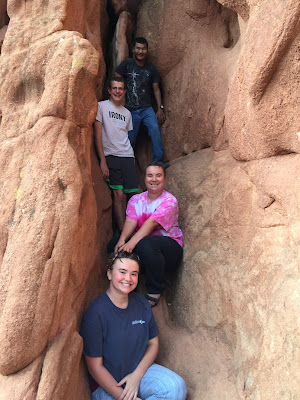 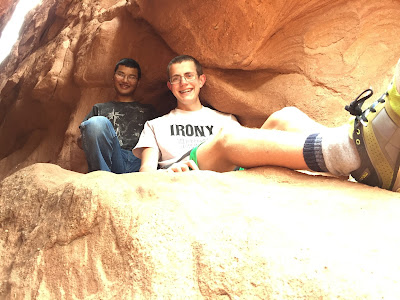 Boys and boulders.  Nothing more needed.

This is the first summer since beginning homeschooling that we have taken completely "off" from school, and we all really needed it.  We won't even start our studies until the day after Labor Day, which is when we traditionally started when I was a kid.  It feels like we are playing hookie!  I love it, and we have a whole month left.  Full speed ahead once we start back up though, so we are all taking advantage of it while we can!

Made me feel all warm and gooey inside. Just wish Matt wasn't in pain though.