Nice is so Nice

It's a quiet fall evening with a wintry briskness in the air.  We are all relaxing after a busy day, and no one is feeling the need to do much more than lay around in front of the fireplace.  This is going to be a bit of a random post, just a little of this and that with no form to it, really.

Today I had to work at a booth for the Sweet Adelines chorus as we worked to raise funds at a local area street festival called "Apple Fest".  I laugh as I say that as the kids said that for some odd reason, there were few apple booths and several lemonade stands!  I actually had a lot of fun, as I acted like a carnival barker yelling out things like, "Come get your cotton candy!  Childhood memories on a stick!  Fluffy clouds of sugar waiting for you!"  Guess how much cotton candy we sold at a small town festival in a four hour period?  Over 125...and that was mostly morning hours! Haha!  It was a hoot, and it reminded me of a few years back handing out free corn on the cob at the Sweet Corn Festival.  One of the fun parts of small town living is these sorts of events, where you always bump into many people you know, and where everyone is just glad to be out enjoying a lovely fall day.  While I was hawking cotton candy for the chorus, Dominick and the kids checked out the festival, and then we all headed further north to Grand Junction for a much needed Sam's Club run.  Two full carts and many samples later, we headed out the door.  We only got questioned twice about our kids being ours.  Not bad for our neck of the woods :-)

As I sit here I am listening to the most amazing conversation occurring on the couch across the room from me.  There, Josh and Kenny are oblivious to my presence.  They are discussing Kenny's journal (1200 random thoughts, and counting) he has kept on his iPad which is theological and somewhat historical in nature.  They both blow me away, all the time.  Their discussion topic?  The symbolic meaning of darkness in the Bible as well as in the world itself.  There they sit, snuggled next to one another, Joshie has just thrown out a quote, "But remember, Kenny, Martin Luther King said that darkness can not drive out darkness, only light can do that.", and Kenny goes on to talk about words being symbols, and "God" is a word that is really only a symbol for The Force that might be "Giver of Light".  I can't even keep up with them as I am trying to type this and share what thoughts are going on in their heads at 10 and 14 years old.

Oh man, Josh just looked up at me and asked, "So mom, why do you think it is that people need to believe that there is someone or something that has all the answers?", I give him some sort of lame, Mom kind of answer, then he says, and I quote, "Technically Mom, every creation story is really just a theory, whether it is science or religion...none of it can be proven, but we keep trying to prove it because we need the answers."

Now, a couple of minutes later, the Dalai Lama has been invoked.

I am rapidly recognizing we are swimming in a deep, deep pool here, and it grows deeper every day!!  Please, please don't let them bring up the Affordable Care Act and the Shutdown tonight, I've spent hours and hours trying to figure out what is best for us, and the last thing I just can't keep up.

Friday night was the Big Game, with Angela's volleyball team playing against Olesya and Matt's team.  This was a highly anticipated game by the entire family, but even more so by the three players.  It turned out to be even better than we anticipated!!  They all played some fantastic volleyball, and it was a close score both matches, within a couple points of each other, with the lead bouncing back and forth from one team to another.  We all enjoyed it so much, and we have seen HUGE improvement from Olesya and Matt both.  Our family is really not all that "sportsy", nor do we care much about winning,  but it is a pleasure to see the kids work at anything and improve their skills. Kenny is playing on the lower level team, and it is the first time he is not sitting out much, and is able to shine a bit more.  Three different times he has successfully served his five serves in a row, which would have been unheard of last year.  Josh still struggles a lot as a first year player, but is enjoying the kids he has met.

We are having a nice, mellow week...something we were much in need of.  I am ever-so-grateful sometimes to just have a week or two where we are able to not feel like we are climbing uphill quite as much.  School is humming along so nicely, the kids are being incredibly diligent with their studies, and we are having some challenging discussions about all sorts of topics.  Imagine tackling evolution, sex ed, and slavery all in one month!  Whew!  Work for Dominick has been steady, and life is just...well...nice.  Nice is a highly under-rated word, in my opinion.  At my age, I am fully aware that "nice" can quickly shift to something quite different, and so every nice day is a treasure.

My wish for all is that "nice" would be a word you could use to describe your coming week.  I am going to take the time to look for the simple things that bring me joy in the days ahead...the gradually changing fiery leaves, the visual breath hanging in the air before me, the most beautiful blue skies anyone could ever wish for dotted with migrating birds headed to warmer climes.  Peace in my heart, a fire on the hearth...what more could any person need? 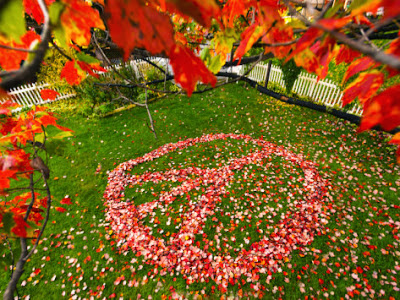 The questions I get these days are whether I am my 7 yr old's gramma. She is from southern India and I'm a product of Ireland, so obviously we look nothing alike. But I can't tell if the questions are because they assume there is a related parent in between my daughter and I or what...anyway I guess it is time to start investing in Miss Clairol, I'm getting tired being asked if I'm gramma!