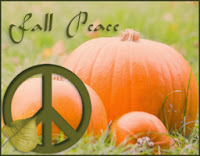 Yesterday's post might be the beginning of a new theme for a few days, or however long it lasts.  I have decided to enter a "Fall of Peace" and make a point of trying to truly be more present to those around me, and to be intentional about looking for my personal peace wherever I am.  I will mark my "Special Moments" of appreciation here, as knowing I am journaling it somewhere will encourage me to actually LOOK for those moments I think I have been missing lately.

Today was a special day.  Oh, it was ordinary, but ordinary can be special, too.  We just fail to see it.  At church this morning, the sermon was one I really needed to hear.  I tucked it away and brought it out multiple times this afternoon, and probably will later this week as I work through a particular issue having to do with my own perception and heart.

Special Moment #1:  Angela pulled me aside after the sermon and told me she had been listening and disagreed a little with a statement made.  We talked about it, and she had an interesting take on it, so we went to talk to our adopted Grandpa...Grandpa George...who was the one who delivered the sermon today.  She shared her thoughts with him, and they talked about it a little.  Later I received an email for her in which he shared a little more after considering her words.  Gradually, our kids' engagement in their personal faith is growing.  It is at times very different than my own.

Special Moment #2:  After the service, Pastor Karen, who was there but not preaching this morning, took quite a bit of time to sit and visit with Kenny.  I have no idea what the conversation was about, but it looked important to Kenny, and it was a huge reminder of why our faith community is so important in our lives.  Our kids are validated for their very humanness, they are not window dressing, but instead are viewed as members of the congregation who are every bit as important and needed as anyone else.  The people God has put in our lives are terribly special, and watching from afar as these two were intent in conversation was a definite special moment.

After church, we planned to drive to Gunnison and on up to Crested Butte, a local ski area that the girls had never seen.  We thought that somewhere along the line we'd take a short little hike.  The area is this eclectic mix of ski town and mountain community trying hard to retain its roots.  There is a lot of wealth there, and yet it does not have the feel of upscale Telluride, which has completely lost its authenticity in many regards, and feels much like the "wanna be" Rodeo Drive of ski resorts (Aspen probably can more fully claim that title).

I had brought along my camera, just for grins, as I haven't had it out for a while.  I thought I might use my phone camera more than I do, and that not bringing my big ol' Canon would force me to get used to using it.  Nix that idea, it'll never happen.  I find camera phones annoying in their function.  When we arrived in Crested Butte, we went for walk, and one of the very first things I came across was symbolic of my Fall of Peace Project: 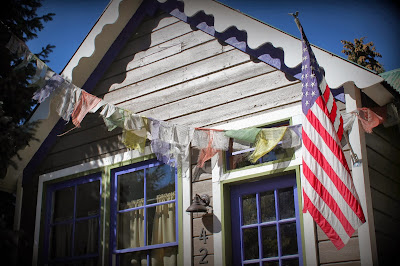 Something about seeing the prayer flags hanging next to the American flag seemed so perfectly suited for this time in our country's life.

Now, for the Humor Interlude.  We passed by a shop bearing this sign outside: 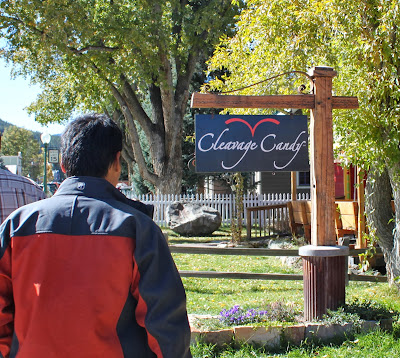 And in an unexpected continuation of our Sex Ed class, Mom had to explain that this was NOT a candy store!!  This also was NOT one of my "Special Moments", though it did make me giggle a little.

We walked around town a little, and saw some art work, and the kids wanted to play at the park a little: 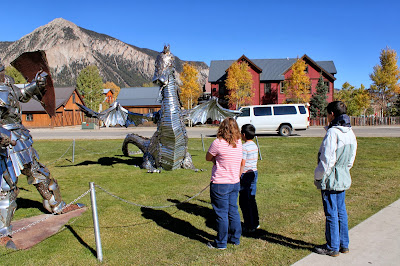 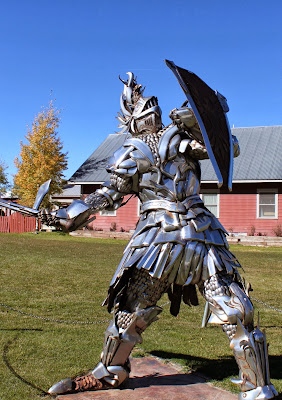 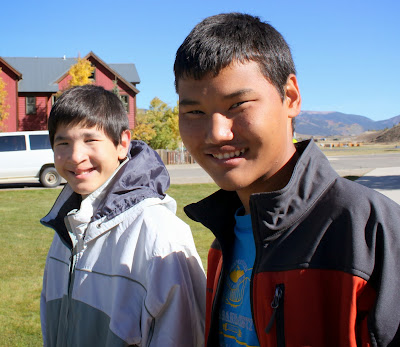 It's growing harder and harder to view the boys as mere "boys", for they are becoming wonderful, thoughtful young men right before our eyes.  How I love who they are!!  Nothing special to others, I know, but so dear to Dominick and I. 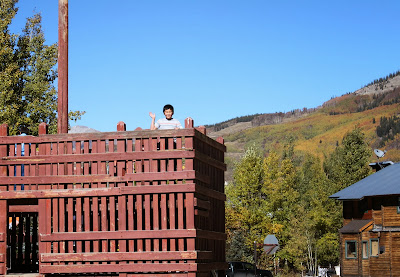 And it is good to have ONE who is not all grown up yet!! 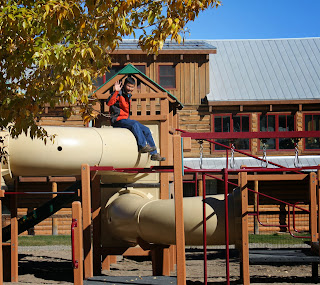 Walking down Main Street on this brisk fall day with a sky as brilliant a blue as only Colorado can offer, messages abounded: 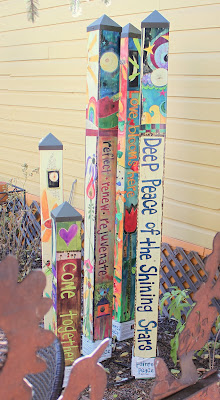 This Fall of Peace is just what I needed...and the message of Reflect...Renew...Rejuvenate...is a good one to hang on to. 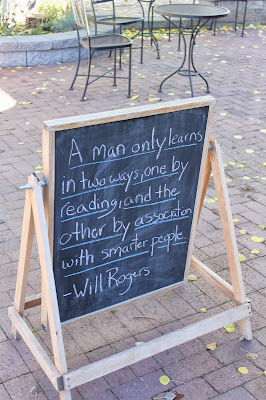 Special Moment #3:  After reading this sign, realizing that God has blessed us with incredibly bright people to learn from.  I am surrounded by folks whose intelligence I respect, but more importantly, whose character is something to emulate.  Adults often forget that we too need to make sure we are in good company, for good company will in turn help us to be good.

With the afternoon growing late, it was time to head back toward home.  While we were not in an area to see peak color this day, the beautiful hues of fall were still evident: 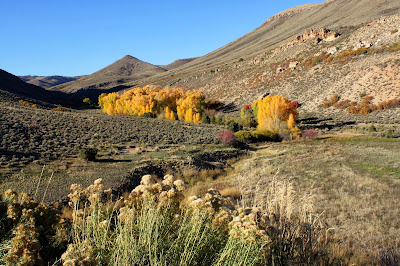 But even more beauty was right in the car seat behind me, the beauty that can't be duplicated but that is the equal of any of God's handiwork...that's because...well...it IS God's handiwork! 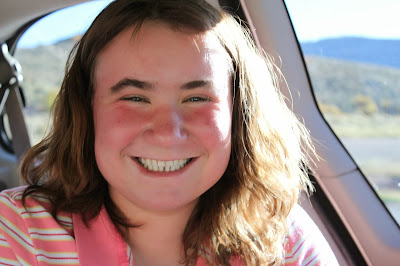 That joyful smile is worth a million bucks to me!

Special Moment #4 came when we were talking in the car about what sorts of activities the kids would like to do as a family, now that they are indeed solidly in the teen years.  As everyone was batting around suggestions, Angela said, "I don't care what we do, as long as we do it together.  I like everything!"  and then every one of the other four chimed in with, "Yea...me too.".  Then we talked about family Game Nights, Movie Nights, trail walks...even Bocci Ball was thrown out as something they want to do more of!  That our children love our time together, even though they are at the age most don't care to be with parents or siblings, is a great, great gift.

We came home and rushed to get dinner ready, so we could watch a film for school.  The Amistad was on the agenda for the evening, which is an intense film to see with some adult content where violence, in particular, is concerned.  The realistic portrayal of this history changing event was spellbinding, and the acting was simply superb.  Anthony Hopkins held us in the palm of his hand throughout his entire performance, but when it came to his argument before the supreme court, and when he uttered the words, "We are who we were.", Special Moment #5 arrived as the kids all said, almost as one voice, "That is so TRUE!".  Angela was the one who was incredibly moved by the plight of the Africans, saying, "This is so ridiculous...how can ANYONE treat people like that!".

Special Moment 6 belongs all to Joshie, who has struggled a little with his usual seasonal return to being a little less secure as fears once again arise.  We sat next to each other at the table tonight as he was trying to find a musical selection on iTunes.  He had a little money and had a particular song he was looking for, one that was very different than most 10 year old boys would be seeking.  "Ubi Caritas" was the title he was looking for, and he wanted a rendition that didn't sound "all echoey and like in a big church", so we listened to many versions together, steeped in the lovely sounds.

Earlier in the day, he had turned to me and out of the blue asked a very serious question, one which speaks to where his heart is during this season every year.  "Mommy, do you think that little baby in the car that rammed the White House will remember anything about what happened to its mom?  Do you think that forever it will never forget that its mom was killed?"  Knowing where Josh is right now, I turned the tables and asked, "What do you think, Josh? I think you have more experience in this than I do." He thought a moment, then offered his reply.  "Well, I think it will remember a whole lot more than adults will ever realize."  Holding his hand as we strolled, I squeezed it tightly and said, "Yea, I am sure you are right."  and we continued on in silence, walking into the sun with our love warming the very life around us.
at October 07, 2013

Thanks for making me smile today, with your words and photos, yesterday was a day for change all the way around, apparently. Hugs to all of you.