I have avoided it for 44 years.  I have skills in some areas, but the arts and crafts, or basically anything requiring more than 2 dimensional thinking, are not an area I want to enter.  But at $12 to hem a single pair of pants, and having a short daughter, I figured it was high time I took the leap and forced myself to learn how to hem.  So I bought a cheapie sewing machine at Walmart tonight.

You know what was funny?  I almost slunk around the corners, hoping that no one would see me for surely they would point and laugh derisively, understanding almost innately that I can drive a keyboard, but could never drive a sewing machine.  They would be completely correct.  But for $79 I can't go wrong, and it will take only a few pants to recoup the cost.  I can no longer allow myself to sponge off gifted and talented friends to hem our pants.

You have no idea how much I hate even the attempt, for I am clumsier than anyone I ever met when it comes to such tasks, and it serves only to remind me of why I got a C- in Home Ec on 7th grade for creating a "dress" that was somewhat akin to a maternity dressing gown.  This is just not my thing, but by golly, I am going to learn it.

There was the added bonus of Olesya having access to an inexpensive but serviceable machine.  She has a secret project in mind and is in collusion with a special friend to create a blanket for Matthew that is as long as he now is and is covered in airplanes.  The kids all love their blankets so much, and Matthew has grown into a gargantuan this year.  Olesya wants to make this for him, and it will be a very sweet gesture which I am sure will mean a lot to him.  And let's face it, hey, maybe SHE can hem the pants eventually around here after I get angry and threaten to throw the machine against the wall! Hahaha! 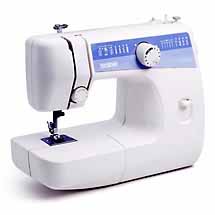 ﻿
Our new machine looks a lot like this...simple..elegant...mocking, er I mean, magnificent.
Kenny has an interest in sewing too, and in fact has taken up knitting with Miss Elinor, our ever-patient weaving friend.  He is proud of his few rows he has completed (and considering my lack of skill I am impressed as well!) and I think he will want to try out the machine as well.  Something you might not know about Kenny is that he has a little fashion side to him, a designer in the making.  He likes to be sharp dressed and if he could he would wear a suit and tie every single day.  He has talked about a couple of paths for his life, one being to go to Bible College of some sort but he does not want to be a minister, or he likes to check out clothes and has said he might want to do something with clothing some day.  We'll see, he is a young man with a wide variety of interests and I have no clue which way he might ultimately end up going.
But it wouldn't hurt to have another one of our kids learn how to use that darned machine, right? Hahaha!

I am hoping to learn something else as well.  We were given an autoharp by another homeschooling family, and I have decided I want to learn how to play it a little.  I don't know where to start and our local music store in Grand Junction didn't have a single autoharp book, so I am going to check into Amazon and see what they might have.  Strange, huh?  I have no desire to learn guitar, but thought this might be kind of fun to try out.  Despite having 8 years of clarinet back in high school, I was really given no true music instruction so I have no idea about chords or anything so this will be a challenge for me.

And as I read this post I realize I am a True Geek...unable to operate a sewing machine AND wanting to learn the autoharp.  How much higher on the Geek Scale can I possibly get??  Maybe I should take up Irish Clog Dancing too (No offense to any cloggers out there is meant, let's face it though, not necessarily high on the 'cool factor').
Our week didn't start out on a high note, and as the day wore on it seemed I was with The Space Cadet Crew.  Everyone was sort of "out there" today, and it was a frustrating one although we did ultimately get a lot accomplished.  I learned that Kenny has been sneaking into the bathroom at night for an hour or more and reading after bedtime, which both angered and delighted me at the same time.  I mean, how can I get too mad at this kid finally wanting to read that badly??  But, we have a history of Kenny kind of doing this sort of sneaky thing, so I couldn't let it slide.  However, I have yet to come up with an interesting consequence for this one should he break it.  I LOVE good, logical, creative consequences...any good ideas out there?  I can't take away books, that is exactly what we have been working to build toward.
We actually had a brilliant consequence this past week.  The boys are, well, boys.  That translates into "pigs" when it comes to their clothes all over the place.  I have warned them over and over again that I hate having to search through their room to find all their clothes to wash.  We don't have more than 5 pair of pants for each which means I have to have every single pair in the washer come time for their clothes to get washed, or they will be out of clean pants.  Well, the other day, I had finished (or so I thought) their laundry, only to carry it into their bedroom and find almost another full hamper full between clothes under their beds, on the closet floor, on the dresser, and behind the door in their bathroom.  I grinned as I called all 3 of them together and said "I am SO HAPPY and I want to share it with you!  Mommy gets an entire week off of doing laundry because YOU THREE have earned the grand prize!  A week of laundry detail!  All expenses paid, yes, I will provide the detergent and even the softener, you will provide the labor.  I have told you that I am tired of thinking I am done with laundry only to come in here and find scads more, so this is your consequence.  Thank you SO much for the week off!!", and I turned on my heel and left the room, grinning from ear to ear.
I'll be darned, those boys didn't argue one iota, and followed me out with hamper in hand.  4 days later they have done at least 6 loads, folded (well, sort of), hung up and delivered laundry for all of us with nary a complaint.  They are, however, counting down until﻿ Thursday :-)  The girls laughed and said they KNEW they would be next because the new has totally worn off and they have dirty clothes crammed all over in their closet that don't make the hamper.
Oh yea, another new development which is not new to those of you who read my Facebook posts...we have been invaded by Hannah Montana.  Oh man, I can not believe it but I gave in after hour upon hour of Sound of Music I was left mush minded and had no choice.
I think I prefer Sound of Music, and now yearn for Mama Mia once again.
Justin Bieber...no...please...no...not that...noooooo..........
at February 21, 2011

I recently moved back to australia from Canada and have been majorly delighted to be reunited with my friend, my sewing machine.
If you need any help (and I lived closer) I would be glad to pop over. And remember practise makes perfect :)

Check out "How to play the autoharp" on YouTube!

The sewing is the easy part. Do you know how to cut around the pant leg, come back to the point you started, and not have an arc in the middle? If your answer is no, I am available to give lessons. I charge a very nominal fee. (How about a can of diet Coke?)

I'm learning to use a sewing machine right along with you! My mother has TALENT in that area...I never wanted anything to do with it when I lived at home, now I'd sorry. Mom isn't 5 minutes away anymore and I needed a machine. She surprised me by sending a new machine to MN last time Brenda came to visit. I'll figure it out, when I finally manage to watch the instructional DVD! I was hoping for a manual that I could scan quickly, but apparently technology is far too advanced for that! Two more things you might want to purhase : a rotary cutter and a cutting mat.

As for your sneaky reader, perhaps he would be deterred if he had to clean the bathroom? Toby found out that lying earned him the grand prize of "chief pooper scooper". It worked wonders...now I think Anara may be the one to need the honor next, she's the one that has a problem with telling the truth lately...if only the snow would thaw!

Lilianna was just saying today that she wanted to learn how to sew! haha. Maybe we should buy a sewing machine too!

I went though a punk rock sewing phase in my early 20's and made skirts and dresses out of curtains, shower curtains etc. I am particularly proud of a hideous halter top I made out of a dukes of Hazzard bed sheet! haha...those were the days!

My kids all have daily chores. One of them does the laundry. One load on school days and two each day on the weekends. The oldest loads the dishwasher (I take the clean dishes out and put them away). Another feeds the dog and cleans the downstairs bathroom. The other sets the table and cleans the upstairs bathroom.

I didn't have a daily chore when I grew up. I should have. All members of the family should contribute to household chores. It keeps Mom from going off the deep end... ;)

We LOVE good consequences... I don't have one for sneaky reading.. if you come up with a good one, please share as my daughter will need the consequence as well... We decided that as long as she wasn't crabby, if she "sneaked" reading we would be okay with it, but if she was crabby from not sleeping... she would get an early bed time on the crabby day. We talked with her about it, and said that if we saw her abuse the extra reading time, then we would discuss further consequences... so far, so good.. she just turned 9. I hope she sneaks to read forever!

oh dear I feel your pain. I can sew stuff if I just make it up, but following directions and a pattern? no way. I left my home ec project (a sleeveless denim blouse) in my bin at school, didn't even bother to try finishing it. But I have a vague memory that hemming pants can be hard because of the thickness of material involved. My kids wear shorts or capris whenever possible :)