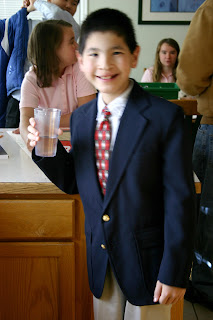 We had a very nervous boy this morning as Kenny mentally prepared himself to be liturgist for our Sunday worship service at church.  Unfortunately we didn't get the bulletin until Saturday evening, so he didn't have very much time to prepare, but we spent the late evening and early morning going over and over what he was to say.  We spent a lot of time working on enunciation, as Kenny's speech can be difficult to understand at times for those who are not used to hearing him speak on a daily basis.  There were also many words that were very hard for him to pronounce...compassion, imbue and constant were some of the tongue twisters for him but we worked and worked on them until they came out mostly correct.

The church we attend, Hillcrest Congregational United Church of Christ, is a gift in a million ways, but one of the ways that was most important on this special day was that our son at 12 years old could stand up front and lead his congregation in worship to the best of his ability, feeling certain he was loved and respected for who he was.  There was no fear of private ridicule as he tried on this new role, he felt safe and secure to step out and not worry about if every word came out correctly, or if he made a mistake in other ways.  He knew he would be supported in the effort and that, as our pastor has often emphasized and rightly so, this was NOT a performance, this is worship, and that negates the need to feel pressured to be perfect.

Did he make mistakes?  Sure, a couple.  Did he stumble a little?  Yes, but just a bit.  Overall, Kenny exuded a confidence and maturity that surprised even me, and he walked away standing just a little bit taller and recognizing that his contributions to the life of our church are just as important as anyone else's.  And no less than 3 people shared with me privately that they were in tears seeing him up there, realizing all he has to struggle with and has also overcome.  Many know of his academic challenges and his speech issues are obvious.  But this little guy has gumption, and he IS going to make it in this world.  It will not be all his parents' doing either, Kenny and all our kids have a little piece of so many other wonderful, loving people inside of them.  Do they have challenges beyond what other children might face?  In reality I acknowledge that is true.  But those challenges are being lifted up and cared for by a community of folks who, in big and small ways, are contributing to them overcoming them.  Those folks with tears in their eyes today care about our kids too, and I am humbled by that knowledge and recognize it for what it is, the long reach of God's arms.

And as Kenny sat side by side with our pastor in the front pew, her arm gently resting on around his shoulders, I realized God's arms are multiplied by all of us...we ALL are God's arms, if only we elect to use them in ways that are love affirming. 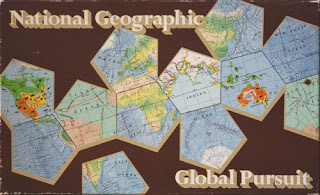 Other than Kenny's liturgical debut, we have had a very busy weekend.  We went to the Math and Science Museum in Grand Junction on Friday, where we had a great time with all then hands on exhibits.  We spent Friday night playing a geography game from National Geographic called "Global Pursuit".  It is on loan to us from friends and we recently cracked it open to give it a try.  You HAVE to get this game if you are homeschooling and working on geography!  It is terrific fun, and your kids will love it.  They'll learn a lot without knowing they are learning a thing!  We'll be playing this one a LOT in the months to come.

We all volunteered and helped clean up at church on Saturday morning, which was a lot of fun.  Matthew in particular really showed how he has grown in size as he helped muscle furniture down staircases and broke down old counters.  All the kids worked very hard, but it is still unsettling to me to see this big, hulking body with the deep voice who is supposed to be my kid but looks and sounds nothing like he did a year ago.  He is only 11 but lately folks are mistaking him for 13 or so, and I can see why.  I need to remind myself that despite his bigger size, he is still very much a boy inside that body and needs to be allowed to BE a boy for as long as he needs to. 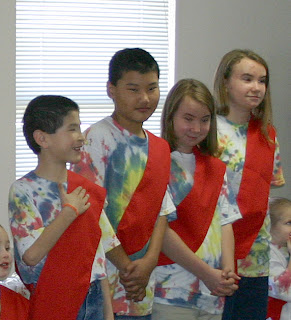 Our little church youth group, Explorers, had it's twice monthly meeting Saturday evening and we all enjoyed that a lot.  We are studying disabilities and the character quality of kindness, and each will receive a pin upon completion of our meeting activities.  Kenny also spoke at the meeting, sharing what it was like to have cleft lip and palate, and he did a very nice job.  We have decided to give him a "public speaking" pin for  his efforts this weekend.  Dominick and I feel it was certainly well deserved.

I have been surprised how much our kids enjoy Explorers.  They are the eldest there, and yet they are really getting a lot out of it and chatter all the way home about what we did that night as they look forward to the next one.  Here is a picture of 4 of the 5 during our awards ceremony.  We have kept the costs inexpensive so that everyone can afford it.  Our club shirts were tie dyed and made by the kids, and our awards sashes were kindly made by the grandma of one of our Explorers.  I think the kids look great! 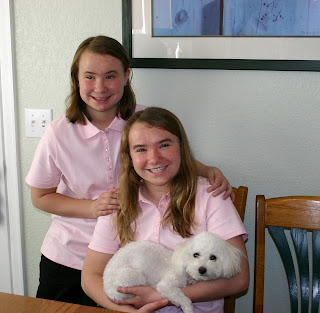 This afternoon we had a special treat as we went to a concert locally where the focus was on Russian music, and we enjoyed the performance of an extremely talented pianist there from Russia named Kirill Gliadkovsky, who currently teaches at Southern Utah University.  "Talented" is an understatement, and I consider it quite surprising that we were able to hear someone this gifted in our little town.  Friends who provided us with tickets also made sure we could meet him afterward, and it was very meaningful in particular for Angela.  She chatted with him in Russian for a while and walked away saying over and over what a very nice man he was.  She then asked if there were guitar players who were as good as he was on the piano.  Maybe this will spur her on musically.  She really enjoyed speaking Russian face to face with someone, and poor Olesya understood very little of the conversation, her Russian is just about totally lost.  It seems to have no meaning for her, she is not at all disturbed by it, and I wonder if distancing herself isn't more important for her than retaining it.  There are a lot of emotional undertones related to native languages for adopted kids.

We ended the weekend with a lovely meal with our adopted Grandpa, who beat me at Scrabble again, much to the kids' delight.  We caught up as we hadn't visited in a couple of months and a lot has happened in each of our lives.

Now I sit here trying to catch up on input of hours for the kids for school, trying to write a proposal to be presented at a meeting tomorrow also for school, and running through a mental list of things to get done before leaving town for Mom's Great  Homeschool Convention Adventure on Thursday.  I am starting to get a little excited, but still have a ton to do before then and wishing I was further ahead on laundry and other chores.  Somehow I'll manage, but I need to get in gear.

Off to read a little before falling asleep and facing a busy new day!
at February 27, 2011

It does seem that kids who are adopted to a country with a different language tend to lose their first language & eventually lose their accent, if they haven't hit puberty yet when the transition occurs.

Older kids, those who've hit puberty & beyond, tend to retain their original language and also have an accent from their first language when they speak English.

Kenny was/is awesome! He rocks! And count me as one who had tears in her eyes watching his poise, earnestness, effort, and the shine of delight on his face.

(Maybe it is time to let the girls have their turn at laundry while you get ready for your adventure.)

When you blogged about Angela asking about classical guitarists, I thought of this lady we heard with OKC Philharmonic. You can see her performing at the White House at http://www.sharonisbin.com/video_whitehouse.html.

I find her to be very emotive in her playing mostly Spanish music, her heritage. I wonder if angela might someday want to play the balalica, familiar from Dr Zhivago. Lovely sounds for sure.