A LaJoy 4th of July

Our 4th of July started off a bit weak, but ended on a high note. We woke up and had plans to go to our local celebration during the day which was to include a helicopter drop of ping pong balls worth rewards, a "hubby carry his wife" contest, a tricycle race, and other kind of wacky things. We got up and casually got ready to leave, surprisingly none of us in all that big of a hurry to do so. The boys were excited to wear their shirts and I bought Halloween makeup at the day after sale and put it away for the 4th of July so we did our own face painting (thus eliminating any desire to have it done downtown where it would cost a few bucks per kiddo!). Dominick and I wore matching shirts as well....don't know why or how we started that silly tradition for all of us but we manage to find cheap ways to do it and it IS kind of fun.

Here we are getting ready: 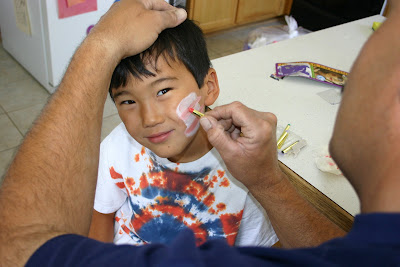 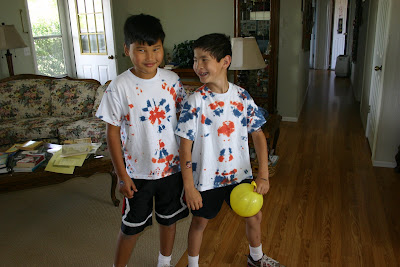 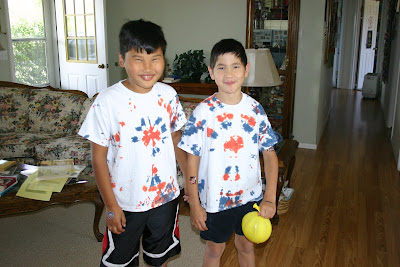 Kenny's turn to have the more serious look... 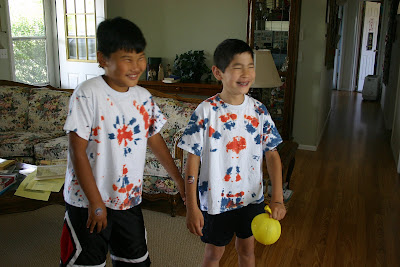 Then they both dissolve in laughter!

Then Kenny wanted to show off, he was SO EXCITED that he could finally blow up a balloon. He told me "Mommy, look! For the very first time! I never blow up a balloon before!"...thus causing the palate closure surgery to be deemed a huge success in his eyes. He actually asked me to take a picture and put it on the blog so everyone could see, so here it is at Kenny's request :-) : 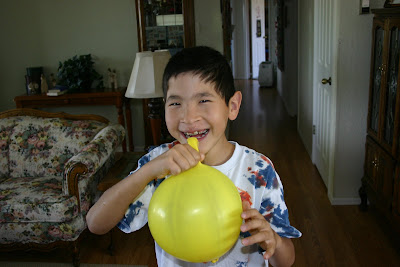 We went to the downtown event, but it was clear after about 30 minutes that we were all feeling pretty wiped out. This was our first real event out after having been so sick for the past few weeks, and it was obvious we were not at our best. The kids had no energy, it was fairly warm and we decided we would go home and rest in hopes of feeling better for the evening.

We anxiously awaited the arrival of our overnight guests, long time friends of ours from Denver whose son is one of Matthew's best friends. They arrived late in the afternoon, and then we were off to our church evening picnic where we all gather yearly to watch the fireworks. It was so relaxed, and such a nice time spent with friends. All of us were in much better shape to enjoy the evening and the boys had a blast playing tennis, tossing a frisbee around, Joshie was making mud pies and a moat, and running around in the dark. It was low key, but it was just what we all needed...and made me love small town life even more. 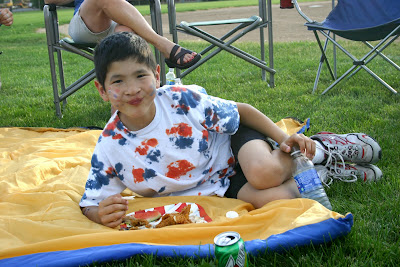 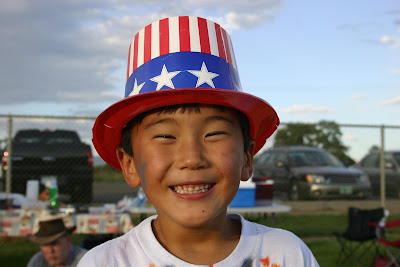 As always, I love seeing pics of the boys. They are just adorable. Way to go with the balloon, Kenny!

Yay for Kenny!!! I'm sure that was a very exciting accomplishment for him :) I love the boys' tie-dyed t-shirts. You're gonna have to teach me so I can do that next year!

Sounds like a lovely day and I know the joy of hearing a 9 yr old excited that he blew up a balloon without plugging his nose!!

I'm a little late reading this, but...