A Balm for Weary Souls...Laughter!

Today was a great day, a wonderful, easy, funny day.  It ended a mere 30 minutes ago as the kids all quieted down for sleep and Dominick began his deep, snore-filled slumber.  If the rest of the trip is anything like today, we will be rejuvenated as we haven't been in a long while.  Things haven't been terrible lately, just hard.  Like every single day has been harder than it has to be, and although we tend not to stress as much as many might if they were walking in our shoes, it has been building and we needed a little release from it all.  Today was a great step toward that.

Everyone is ready to take off, the car is packed to the gills, and our driver is ready to rock! 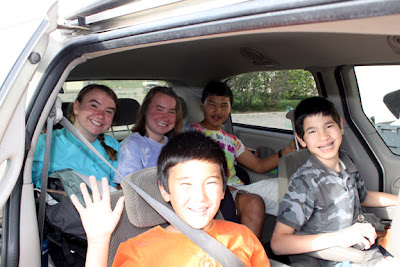 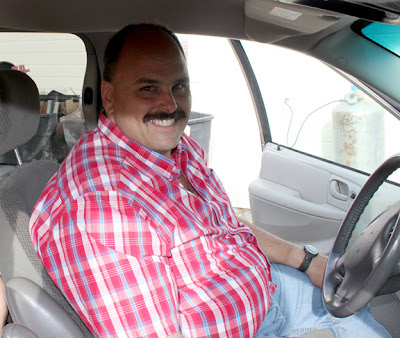 First off, our day began looking like this as we drove out of town, reminding me once again of one of the reasons we live where we live even though it can be harder to make a living in Montrose: 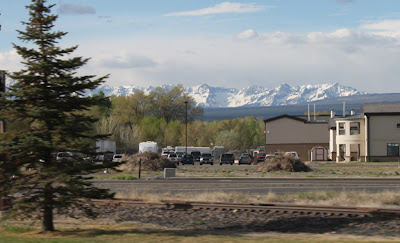 This was literally 2 minutes from our home, and there are times I take it for granted...but not often.  It wasn't long, a mere 2 hours, before we were in a much different scene: 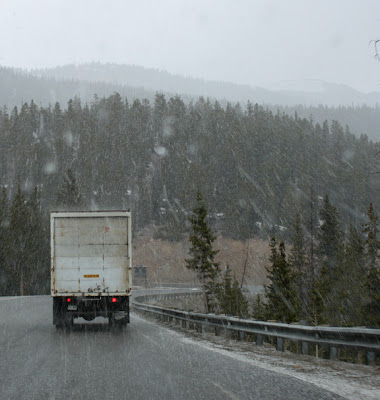 Yup!  It's Colorado, folks, just blink and the weather will change on you.  These spring snowstorms in the mountains are one reason you never, ever leave home without a jacket and you keep the window scraper in your car all year round.  Luckily, it was a brief storm we drove through that left little snow behind, and soon we were driving beneath sunny skies once again.

We got a fairly early start today, and so we arrived in Denver earlier than originally planned.  This allowed us to visit a couple of places we had planned on trying to cram into our weekend.  We started with the Leonardo DaVinci Machines Exhibit, which was fabulous! 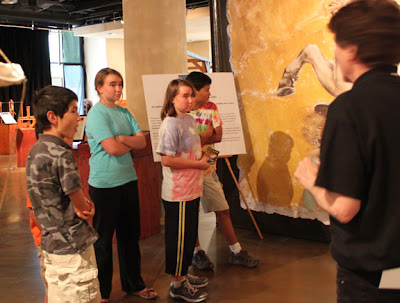 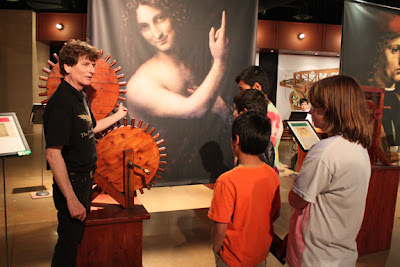 There were over 60 wooden models of machines he designed created from DaVinci's old drawings, most of them were working models and it was stunning to realize how much of our modern day equipment is based upon principles DaVinci explored and demonstrated 500 years ago.  We were all pretty fascinated and had an excellent tour guide. 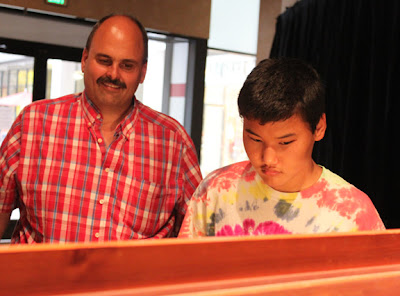 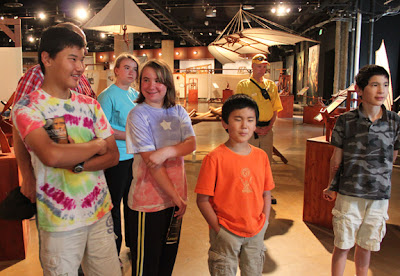 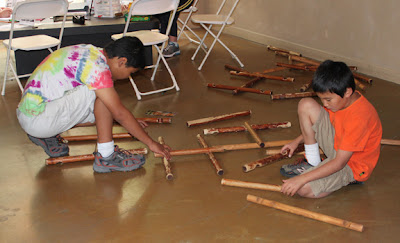 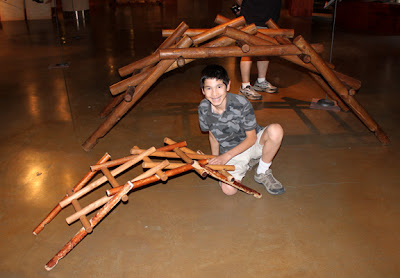 Kenny surprised us all by being able to recreate a replica of the larger scale model bridge behind him.  All the kids really enjoyed the exhibit, and I am glad we were able to get discount tickets to this traveling exhibition.  If it comes to a city near you, I'd highly recommend it!

After checking into our hotel, we then went to see the single thing Mom had requested of the trip...to go explore Denver's new IKEA store!  I love IKEA furniture, and if I won the lottery I would refurnish my house with their sleek, well designed items...I am particularly in love with the looks of their kitchens.  So I walked through and dreamed a little bit, and as Olesya teased me about drooling I replied "It's just a dream to have a kitchen like this, remember...want's versus needs?". Angela came up behind me and said "You remember too Mom, we LaJoy's dream big dreams and we make them come true!  Maybe someday we can have an IKEA kitchen!", which I thought was so sweet of her to say.

We went back to the hotel room after hitting the grocery store to stock up, and then the kids all had to write in their journals.  After completing their writing, we all shared what we wrote, and even I participated as well, which the kids thought was fun...and talked Dominick into writing about our next adventure tomorrow. We laughed so hard as we heard Matthew's story about IKEA, and then heard Kenny's and Joshies.  They wrote of suffering through aisles and aisles of household stuff, of it being interminably long, of thinking they would be there forever.  We girls all wrote about how exciting and interesting it was, and which things we liked best.  It was hilarious to all of us to see how we divided straight down the line on this one, and how funny the boys were in what they said.

Writing wasn't the only way in which humor popped up today, and we cracked up a couple of times.  Once was when we had made a stop on the drive over and Joshua used a quarter in a machine to get a little candy, which is unusual for him as he is not a big sweet eater.  Olesya told me that Josh went to get some "Lice and Mice", and I said "What in the world are you talking about?" and then she said he went to get some "Ice and Fries", thinking that she was correcting herself.  I totally lost it and could barely breath from laughing so hard when Josh returns with a handful of "Mike and Ikes" chewy candies.  Usually I am pretty good at figuring out what our three English as a Second Language learners are trying to say, but that one had me totally stumped.

Then, later in the day, as we are leaving the DaVinci exhibit, Angela asks if now we will be going to see the Leukemia.  WHAT????  Yea, you know...Leukemia.  Oh...yea...IKEA.  Close enough, I guess.  Man, we all laughed over that one, too.

Tomorrow is a busy one, and Lego Fest has at last arrived!  Matt's dream fulfilled after many years, and we are hoping he really enjoys it to the fullest.  That will come toward the end of the day, and we have a lot to see prior, so I'd best be getting to bed.  Looking forward to more laughter tomorrow!  It's a balm to the soul  :-)
at April 26, 2012

I'm so glad you're off to such a good start, Cindy! May the remainder of the journey take place in the same vein. Traveling mercies and blessings!
Peace! Kaye

Joy and laughter and blessings to you. I can't take time to wish more. You've inspired me to look at Ikea on line.