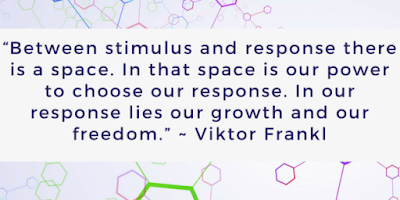 I know with five kids, one might think that we have had a few medical issues along the road, the typical broken arm, twisted ankle requiring crutches for a couple weeks, maybe some stitches here and there.  After all, kids manage to be pretty "breakable" in all kinds of ways, despite the fact that they think they are indestructible!

But sometimes I find myself wondering what it would actually be like to have kids, regardless of the number, who didn't have to suffer so much physical and emotional pain.  I wonder what it would be like to be the mom and deal with just a broken arm or a few stitches here or there, or the wounded heart that comes from first time love that fails.

This past week Angie has been in incredible pain.  She has yet another tooth issue, a failed root canal that has left her writhing.  We took her to the dentist Tuesday, where they determined what the issue was, prescribed meds for the building infection and pain, and had us make an appointment with the endodontist for the following Monday.  Last night, though earlier in the afternoon it appeared the medications were finally kicking in, we found ourselves at the ER as the pain suddenly became unbearable, so bad she collapsed on the floor before we left and could barely walk upright.

Now, this girl is tough.  I mean Tough with a capital T, so if she is complaining, there is really something wrong.  As I sat there feeling utterly helpless, outwardly calm but inwardly wanting to scream at the Emergency physician to GET IN HERE NOW AND FIX IT, I couldn't help but think just how many times I have sat bedside with our kids completely unable to offer any relief other than to simply be present, to offer them encouragement to stay strong and confidence that I know they can make it through. 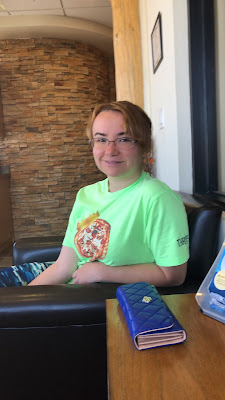 Angie, who is usually so stoic through these kinds of things, was completely unable to speak as she shuddered in pain, tears streaming and body stiff with the effort to stave off the waves of pain.  Her lower lip quivered as she bravely tried to get through this next dental episode, the worst she has yet to have.  Having had five root canals and crowns, along with other cavities and tooth infections, means she is well versed in "what comes next", but that almost makes it worse.

Through all that has been endured physically by our kids; spinal fusion surgery, major jaw surgeries, multiple cleft surgeries too numerous to keep track of, Tuberculosis times two, rickets, tooth decay to a ridiculous degree, and more, I have sat beside them, hopefully offering some level of comfort as I am truthful and acknowledge the pain they are in, but remind them that soon, it will pass.

However, it is the emotional pain that is perhaps the hardest to deal with. The damage that comes from feeling unloved, feeling stupid because brains were damaged, not understanding what they don't understand in any given moment because logic has flown out the window and processing is impossible...and they know. They grow weary, frustrated, and at moments flip flop between complete denial and devastating acceptance.  There tends to be little in between with our FASD  (Fetal Alchol Spectrum Disorder) young adults when we are in hard moments.  It is heartbreaking to witness, and gut wrenchingly difficult to try and find the perfect life raft to throw them that can offer them hope.

Then there are the ways in which we have to protect them from themselves while others have NO CLUE nor can begin to understand.  Heck, I get it, we struggle to even explain it.  Today, while at the dentist, I went back with Angie.  I offered to remain behind if she wanted, respecting her adulthood, but even in her pain she had the presence of mind  to know they would offer instructions that her brain might confuse, and this was not the time to take chances.  Of course, the sweet dental tech doesn't understand any of this, nor that Angie might struggle to answer as her brain was distracted by pain, and she certainly was not going to grab hold of any instructions afterward.  Being the mom of adults who now look like they ought to be handling everything on their own is awkward in all kinds of ways, because they really can't handle it.  I have received more Helicopter Mom looks than I can count, and it is painful sometimes for me to always be perceived that way.  Kenny has a great sensitivity to this and always explains it to others when he goes for medical care or financial assistance, and has told me, "It is hard enough for you to have to do this for me forever, the least I can do is be aware how others might view it and step up so they know I want you here and you are not like that kind of mom."  Of course, he has had far more opportunities to practice it and witness it than the girls have had.

No matter how vigilant we are, there are still things we can't do to protect them. For example, Olesya and Kenny worked on the holiday to seal the parking lot at House of Spirits Liquors and Buckaroos (our stores.)  Olesya was in the sun all day and got sealer all over her arms and hands.  She also got sunburned pretty badly despite trying sunscreen but washing it off almost immediately because it caused her to itch.  She came home and showered, and when she came out, she looked like this (these were actually taken 2 days later): 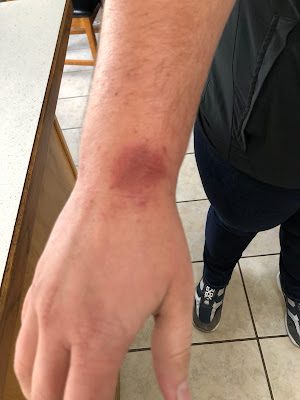 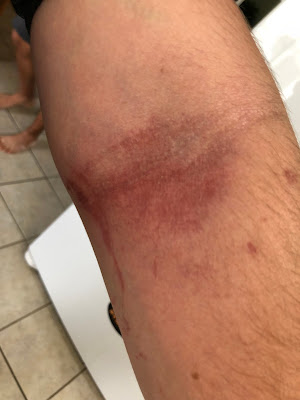 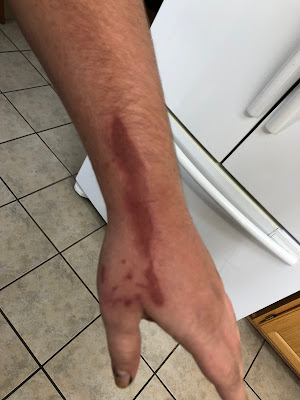 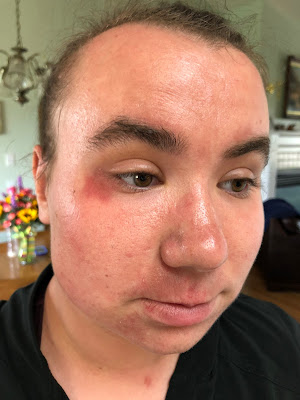 Yeah...I imagine you cringing as you view these photos.  Cringe even more when you realize her brain did not tell her that she was very literally tearing her own skin off her arms and hands.  I was totally in shock when I saw her afterward, knowing she didn't go in looking like that, but she scraped with her fingernails to get the sealer off, NEVER RECOGNIZING the damage she was doing.  When questioned, she admitted she didn't even realize it until she was out of the shower.  Her sunburn was awful, but she hadn't felt that either and she normally turns beat red in the sun so Dominick had no clue she was burning that badly.  In the past, she sensed little pain even with a broken arm that almost required surgery, and she had chemical burns to her feet and knees because she didn't realize kneeling in floor stripper would burn her (she had been told, she just didn't "get it") and even though her feet and knees were burned through layers of skin (she had holes in the soles of her shoes, hence the feet), she didn't "connect the dots" and realize she might be hurting herself with the floor stripper because "I just thought I was wet."

I share this NOT to embarrass Olesya, or any of the kids, but THESE are the ways in which our kids struggle and we worry about them being safe all.the.time.  We just added to our business marketing for Buckaroos that "Some disabilities are invisible"...and yet, as with the above, sometimes they are not.  They just manifest differently and you need to look carefully at the clues.  We have realized after this incident that Olesya's brain must short circuit around pain somehow, and not actually feel it to the degree we all would.

This, too, causes me to ache for the kids.  It won't get better, it never will get better, not this part.  We all know it and are doing our best to navigate these next years as we figure out what is safe and possible, and what is not.

I don't know if I have figured it out yet though.  I have long forgotten what "normal" looks and feels like, though driving with Josh with his learner's permit has been a pleasant and beautiful surprise.  Especially when he proudly offers to treat me to a drink at Burger King to make me feel special and now we have a "thing" every time we go out...that Orange Fanta frosty drink is awesome!  It was also a reminder of just how flexible my own brain has had to be as we work with and love such a diverse set of young people.  Sometimes I find myself offering totally unnecessary reminders to Matt and Josh, who graciously accept it when I catch myself saying, "Wait...sorry for that...you don't need micromanaging.  Just sort of used to it!" and they grin and tell me they understand.  They know those reminders, the checking for comprehension, the double checking are totally necessary in other parts of my life.

One thing we don't have to figure out, thankfully, is how committed we are to one another, each and every one of us.  I might have to guess at what "normal" would feel like, but I don't have to guess at what immeasurable love feels like.  I'll take that over "normal" any day.  I hate the suffering, damn I hate it.  It doesn't matter if it is emotional, physical or spiritual, I would change that instantly for our kids if I could.  But they are who they are, these amazingly resilient, beautiful souls, not in spite of the suffering, but because of the suffering.  I try never to forget that in my yearnings for them to suffer less, for sometimes it is all I can cling to when I see the confusion and pain in the eyes of one of them who is struggling to "get it" in any given moment, or when they are undergoing some painful procedure and I sit back, present but somewhat removed and they know it and there is little I can do but be their cheerleader from the sidelines.

Pain has been quite a teacher in our home.  Suffering has been a companion.  Love has ruled though, always.
at September 05, 2019