Summer is in full swing, school work has been completed, and what was a "class" is now real life!  We are having a family dinner for Angie and Kenny for graduation next weekend, but high school already seems far behind them as work for Buckaroos ramps up!  Let's take a sneak peek at all that has been going on behind the scenes: 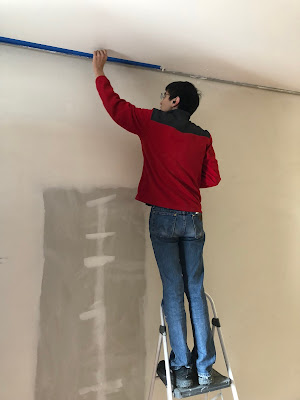 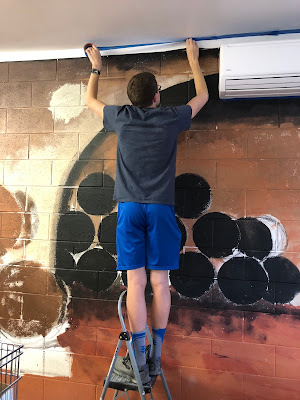 Next came painting the ceiling, and masking things off to paint the walls.  Who is this tall stranger appearing in our photos?  I will explain more below! 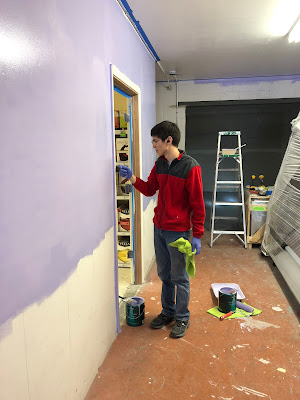 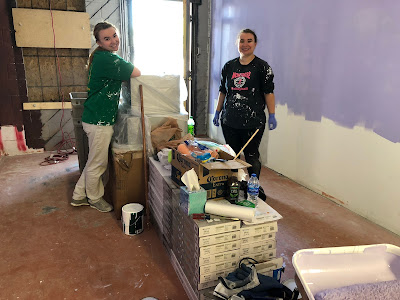 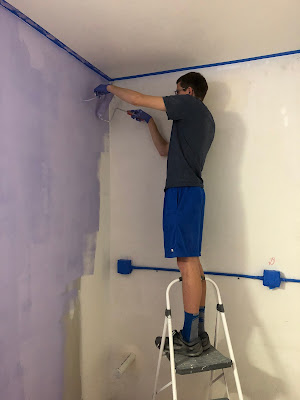 Next came painting, which went quickly and smoothly as the kids have had lots of experience with that particular task! 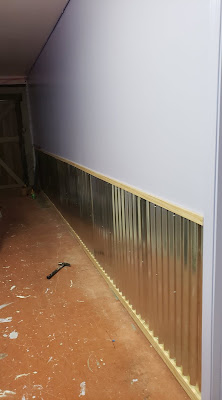 The galvanized metal was installed, trim pre-fitted, and as I am writing this Olesya is staining and applying urethane to the trim pieces. 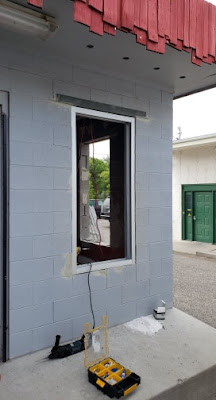 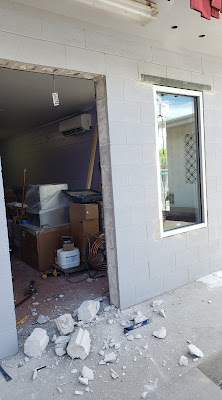 What a difference THIS made!  The installation of two windows at the front of the building will allow daylight to stream through.  The eventual installation of a large glass front door will also help, but first we have to bring in our enormous pizza oven which has been sitting in storage while we get a little further along in the process.  This suddenly made it all feel real! 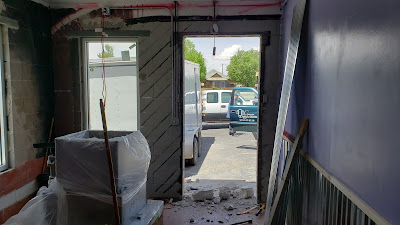 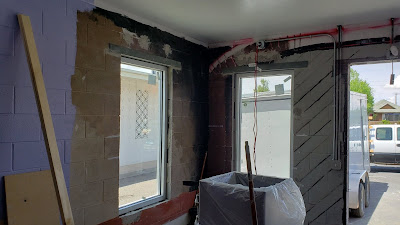 Wow!  It looks entirely different and is beginning to feel like we might just make this happen for real! 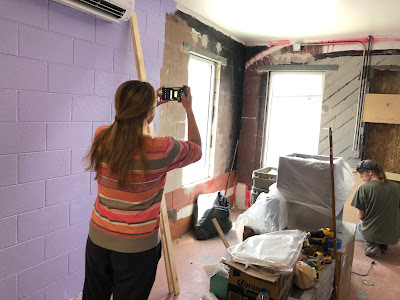 Angie was so impressed she had to whip out the camera to take pics! 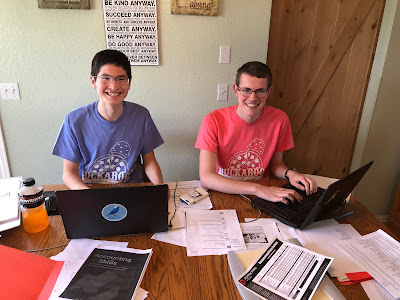 And now for the explanation of who this young man is who has joined us...and no, it isn't another adoption.  Well, at least not legally ;-)  Billy Ashenden is our summer intern and a student at USC.  He is studying economics and will be a junior next year.  He is staying with us through part of August learning about business start ups and studying all the aspects of business we are teaching the kids.  Billy has also struggled with challenges of his own, and understands our mission intimately because of that.  We are thrilled to have him with us, and already the poor lad has put in several twelve hour days.

The son of my best friend, Candi, it honestly feels he is just another LaJoy and it is delightful to have him with us.  Matt was teasing about being replaced, saying "He is the taller, whiter, better version of me!" and Billy has moved into Matt's bed while Matt is off on his summer adventures at Rainbow Trail Lutheran Camp, La Foret United Church of Christ summer camp, and then off to the Netherlands toward the end of summer.  Here is a quick photo of him as our church sent him off with a blessing last weekend: 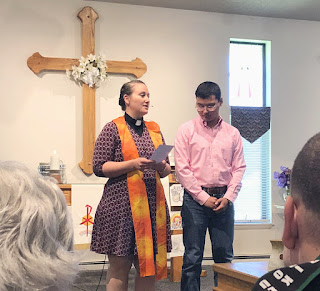 We will see Matt a couple times this summer as he comes home for his siblings' graduation, and then overnight before heading to the Netherlands.

Aside from progress on the building, there has been an incredible amount of hard work going on behind the scenes. 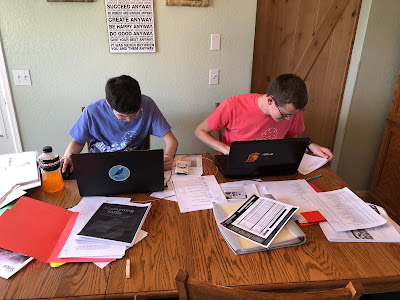 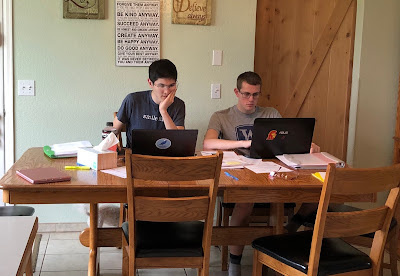 These two have spent numerous hours dealing with menu design and costing out each item we will sell. They have worked with percentages and real life numbers that are scary when looking at debt to potential income, labor, and more.  The reality of the courage it takes to open a mom and pop business has sunk in even more dramatically, and they are doing an outstanding job!  The girls would not be able to do this sort of work, due to math limitations, so they finished up painting and doing more at the store while these two hit the financial pieces hard. 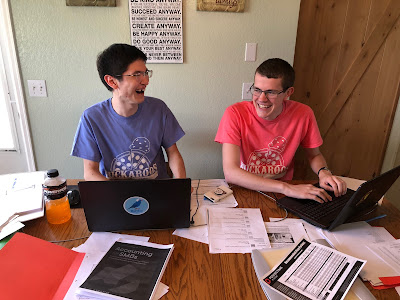 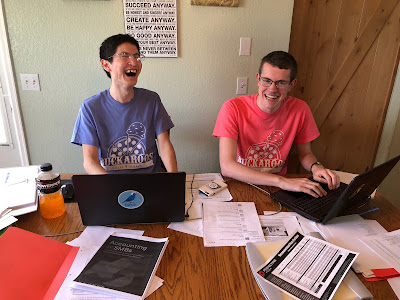 That doesn't mean that Billy and Kenny aren't also having fun while working so hard.  Honestly though, the first photo was posed and they made sure to spread out all the documentation so it looked impressive, and here they are cracking up over that.  Honestly though, they ARE using every document here, and they ARE doing the kind of work that, frankly, tanks many businesses if it isn't done.  Kenny noted at the pizza show that one of the sessions he attended shocked him, there were at least 70 people in the room who were already owners of pizzerias whose questions and comments led him to understand they had never done food costing or analyzed their menu for contribution to profit for each item.  He walked out early saying, "Mom, you and dad have already taught us all that years ago.  I don't get how anyone could be in business and not have done that kind of work.  No wonder 60% of restaurants fail in the first three years..." and thankfully, that also gave him confidence that we just might be able to make it with Buckaroos, because we are putting in the work to begin with, and are willing to sacrifice a heck of a lot to hopefully find success.  If not, they will go down swinging. 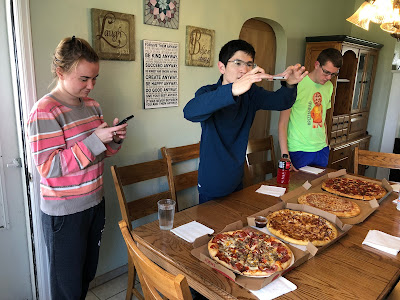 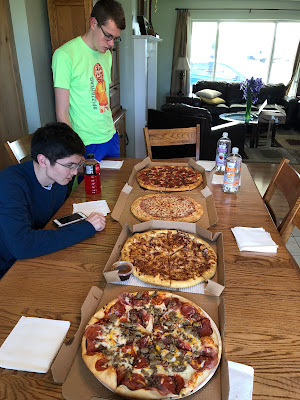 The next step was to check out the competition to learn more.  Of COURSE this involved running around to get four pizzas from four different local establishments, and of COURSE we had to try it all! Hahaha!

It was a good lesson though, as the kids were able to put their pizza knowledge to use.  We have studied various cheeses and blends, sauces, learned about the dough making process, etc.  This actually changed the direction of our menu as we conversed and analyzed every slice, comparing flavors, crusts, texture, shared what we liked and didn't like.  For hands on learners and kids with FASD, talking about something isn't enough, and often parents and teachers don't go far enough to help cement concepts.  Yes, though this was fun, this was also very necessary, just like attending the pizza convention was.  For people who struggle sometimes with logic, seeing and touching can help create connections.  However, using such practices as we are using to accommodate a disability are still just darned good business practices.  You check out the competition, you educate yourselves about the industry, you never stop learning and growing in your craft. 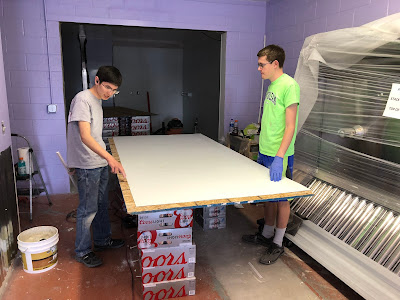 The current step everyone is working on is installing FRP (fiber reinforced plastic panels) to line the kitchen walls with for easy cleaning.  Though not pictured, Josh has helped each day with this task as well, and it is a 3-4 day project.  Behind Billy is the hood and ansul system for ventilation which will be professionally installed.  There is only so much we feel qualified to tackle!

Next the kids will install flooring, Angie is going to begin working on a special little touch for the shop which I will show later, we need to complete the order of our equipment and figure out cabinetry and countertops.  We will begin our real social media presence in about two weeks, and I will share links here for anyone who is interested in following along as we move toward our opening, hopefully in August if all goes well.
at June 01, 2019

I'm so glad that you shared the picture on FB. This is a great family adventure. I want to encourage yall and pray a blessing over Buckaroos.
My friend Elise Sampson and her family started a similar business here in NC. http://reasontobake.com/ . The Sampsons are near and dear to my heart too. And the birthplace for Crankin Engines was at their kitchen table.

Lord Jesus I ask that you would bless the business venture for the LaJoy family. Bless each and everyone of them and help them through the growing pains to start a new business. Lord I ask you to give them courage and perseverance in Jesus name. Amen.

WOW Cindy, thank you for sharing, you have done so much for your children. I am still struggling with my son almost 21 with FASD. Currently working at Old Navy through a government work experience program, and we are waiting to see if he gets hired.

Love seeing the progress. We make our annual trip to Colorado late this summer and always pass through Montrose. Crossing fingers things go well and you are open for business - we will be sure to visit!

I love seeing and hearing about the progress you guys are making towards this wonderful venture. You all are amazing! I am very excited for you and can't wait to see more. If I ever get out your way, I will definitely stop in for a slice and a dip.

So AWESOME to see you guys working on so many things as possible yourselves! These are lifetime skills and that is fabulous. So many these days do not have trade skills. Looks like you are making good progress! Best of luck to you and can't wait to keep following this new venture - so many 'pizza-bilities'! :)