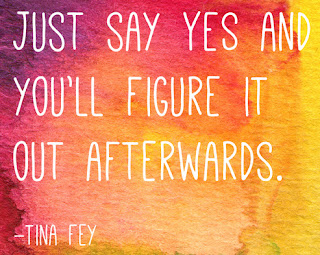 I love Divine coincidences, don't you?  A week ago, we had one such coincidence occur when we least expected it, but when we really needed it.  As often happens, the location was completely lacking in glamour or drama, with the Walmart Produce Department providing the backdrop for an important conversation.  Funny, Walmart really does seem to be Holy Ground for me sometimes, as I have had more than one occasion where God spoke loud and clear to me there.  (OK, I also get that I probably spend half my life there, but whose counting??)

It was there, among the busy aisles framed by displays of brightly colored oranges and apples that I ran into our old "resource consultant" from our time spent in the local public school/homeschool hybrid program which we left about four years ago.  Amy was a huge support for us as we got our feet wet with homeschooling, and she understood better than most the enormous challenge we had before us when we first began.  After exchanging great big hugs and bright smiles, I learned that Amy had left her position with the school district and had moved on to working in elder care in a town nearby, overseeing the Alzheimer's and Memory Care unit at a local nursing home.

Jumping at the chance to gain a little guidance for Angela, I peppered Amy with questions, and she offered so many ideas for us, as well as reassurances that Angela could make a decent living in a variety of ways in elder care!  Whipping out my cell phone, I pulled up training web sites she recommended, and obtained her current contact information.  She offered to have Angie job shadow, and to share any resources she could think of whenever we were ready to move on things.

The timing couldn't have been more perfect.

It was only earlier that week that Angela and I had a discussion in the car as I was driving her to her volunteer visiting appointment.  She was sharing about her heart for working with the elderly, and yet her fears that she would never be able to make a livable wage doing so.  I was trying to encourage her, offering a few ideas about how she might work her way toward a better wage, but not being able to point directly toward how she would get herself in that position.  I promised her I would do more research, and see what I could learn.

And there was the answer right before me, smiling cheerfully and offering web sites and, more importantly, the reassurance I needed to be able to help Angela find her way.  God knew precisely what was required in the moment, and presented it with the usual 2 x 4 I tend to need!

What many may not understand is that for some of our kids, more help is needed to steer them toward their future.  There are fears about being pushed out into the world too soon and losing their connection with their family, there are understandable concerns about being able to perform well in high enough paying jobs to be able to eventually be independent, there is also a lack of ability to do the work themselves to land in a career that is appropriate for them.  It isn't a lack of desire, not  by a long shot as every one of the five kids is a diligent soul and entirely responsible in every way.  It is a lack of being able to easily make mental connections, to see that one thing can branch out into multiple opportunities.  For our three adopted at older ages, Kenny, Angela and Olesya, there are some profound learning disabilities to overcome, memory issues that get in the way, and depending upon brain function on any given day there is an inability to think logically.  This varies from day to day, and from young adult to young adult in terms of significance of delay, but it is absolutely there...and it can sometimes be overwhelming to them as they think about their futures.

As we drove, Angela asked, "Mom, I really do think this is the direction I want my career to go in, but can I earn enough money?"

"Sure you can, but you won't at first, and you absolutely must do more than be a CNA.  That alone will not provide for you, but we will figure it out somehow." I replied

There was more hesitance, and then she asked, "Where do I even go for the CNA?" and I explained the next town over had a training program.

Silence ensued, and I could not tell exactly what was going on for her until she shared, "But mom, how will I get there every day?" and I suddenly realized that she was recognizing she may not be driving by then, as we really aren't sure how long it might take for her to be comfortable and safe behind the wheel, as things are not "clicking" as well as we might have hoped.

It was in that moment that I caught a brief glimpse of how scary the future is for our kids who struggle, yet have tremendous gifts.  How do they move out into the world?  How do they "make it happen" for themselves as it will never be as easy as it is for other kids?

Truthfully, the answer is, "They don't make it happen for themselves.  They don't have that ability."  I immediately realized now was the time for me to lay it on the line clearly, as my own personal contemplation of my "third act" in life seem to be gradually gaining clarity.

"Ang, you've got me, and I will get you to school every day, and I will research, and I will study alongside you if you need me to so I can re-explain things, and I will walk you through all of this as much as is necessary because that is my job.  I love you, you really have a gift and I think it is clear this is the right path for you, and you feel it, too.  So, we make it happen.  I don't have all the answers yet, but I give you my word, I will do whatever it takes.  The next steps of your life don't have to be scary and you won't be alone, I promise." 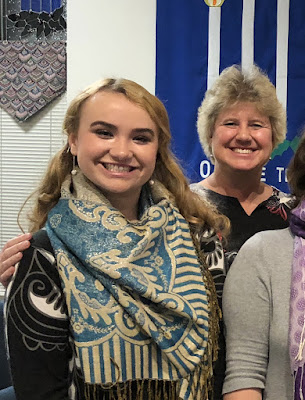 "I think I am beginning to understand my future a little, too, Ang, and this appears to be what God created me to do!  There is nothing more important I could ever do with my life than to be helping all of you as you  move into your next phase.  If some of you open businesses, there is a lot to learn and you will need more help, and I can offer that to get you started.  I am going to be driving Kenny forever, and I want him to have a life of meaning and interaction with the world, so that is just going to be the way it is.  I may be driving you a long time, and who knows with Olesya.  I don't even really mind, as long as I can squeeze in time and projects here and there that are just for me.  You all are amazing in how you encourage that so I can be my best, and I am going to do what I can to make sure you all are able to be your best.  It is how our family was designed to be.  I may not have ever anticipated this sort of involvement with my older kids, but I honestly don't resent it."

Sitting next to me, she grinned, relief was evident.

A few days later, I had an "official meeting" with Angela, and I shared some of the programs for online training that Amy had led me to, we talked about how we would craft a post-high school exploration year for her as well as begin training for her field.  I explained I was formulating a plan where we would go visit various nursing homes, look at state requirements for running a small assisted living facility, look at various careers in elder care, read books on several related topics, and get her enrolled in several courses.  Dominick and I also reassured her of something that was worrying her, and that was that she didn't have to start any of this until after her senior year next year, that there was no rush because we wanted her to have a really successful high school career.  We understood that unlike other kids, her school work took her much longer to do and do to the level of excellence she demands of herself, and that multi-tasking was just not wise for her with her brain.

The grin, oh that grin!  She is suddenly far more excited about her future, it feels more concrete now, and she has at least a little sense of direction now.

This wonderful daughter of ours is going to make a real difference in the lives of others.  Will it be a prestigious career?  No.  Will it be enviable?  Likely not by most.  Will it be crucial for the lives she touches?  Without question, yes.

And my encounters with Angela are helping me shape my own future.  I have had moments of concern as I think about two or three years down the road, what my life will be like as the kids slowly work me out of a job as they graduate...but also wondering if I will ever be fully out of a job with some of their needs.  I had never imagined homeschooling, and never imagined 10+ years of my life spent
doing this, but I did always assume in the back of my mind that "after" I would strike out to do something new, maybe for the first time something of my own choosing rather than just "get a job, any job" because we needed the money.

I have referred to the future as my anticipated "Third Act" of life, and I am slowing coming to grips with the fact that my Third Act may still be about others.  And, as I stated above about Angela's possible career direction, my future "work" may not ever be prestigious, or enviable...but it may truly be crucial for the lives I touch.  And it may not be many lives other than the lives that reside under my own roof. 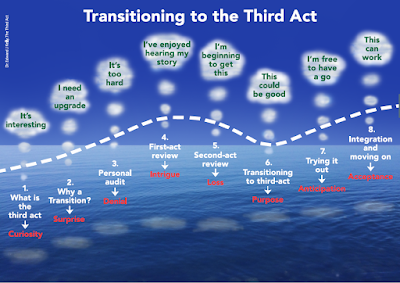 But one thing I have learned after all these years, is that if God is nudging me in a certain direction, I am always, always going to say "yes" regardless of whether that conflicts with my own imaginings for my life.  Every single time I have said "yes", even when it seemed counter to all I thought I wanted, I have never been disappointed, and I have always come away with a sense of wonder at how beautifully things turn out.  More than any other thing I can model for our kids, this one matters most.

So, here we sit, looking tentatively forward toward budding First Acts and Third Acts, not knowing for certain how it will all play out, but convinced of one thing, and one thing only...we will say "yes", both of us, Angela and I.  Divine Coincidence will also surely accompany that "yes", so we can rest assured we will be joined on the journey.

Simply beautiful. This is what families are meant to be.God bless you all.

Beautifully written Cindy. Those divine acts do have to hit us over the head sometimes, don't they? Please remember that your family has lots of members that don't live with you in Montrose who are willing to step in and help whenever we can. We all love your family and would jump in in an instant. Just put out the call. There is divine guidance in everything we accomplish. We LOVE your family, dear friend!...Dianne