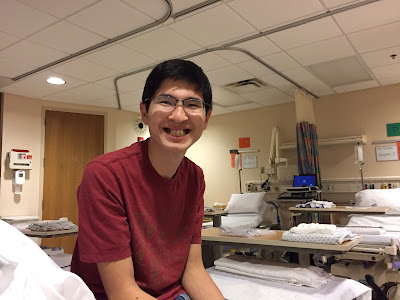 Writing from our apartment in Chicago, where Kenny is resting comfortably post-op, there has been so much to reflect upon.

It has been quite a week, and he is doing very well.  Shriner's provided the best possible care, and swelling and possible bruising were minimal.  He spent one night in the ICU, then one night in a ward, then went "home" with Candi and I to an apartment here to recover for a few days before we board a plane to head home.  We are so blessed to have help with Candi here, as Kenny truly can not be left alone with where his brain function is right now, and it is enormously helpful to have a second set of eyes and ears through something this intense with someone like Kenny. 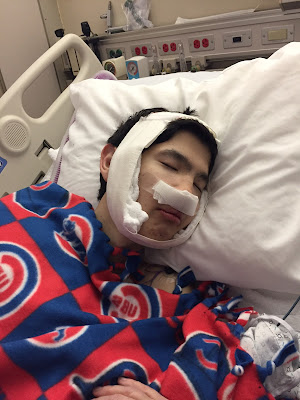 Kenny is truly one of the most pure-hearted individuals I have ever encountered, our entire family knows this to be true as do those who know him "in real life", but it was never more apparent than it has been this past few days.  This knowledge fills me with equal parts pride and dread, as that pure heart can bring so much joy to others, but can also be so easily manipulated.  Despite fading in and out of the affects of serious narcotics, he has been so expressive of gratitude to his nurses, so polite, so concerned about causing others any inconvenience.  I can't really explain what it feels like to live with an individual who is this beautiful inside and out.

As I wrote a friend a couple of days ago, this experience with Kenny as a legal adult has offered twofold pain. Watching him go through the temporary misery of a surgery of this sort was hard enough, but there was a deeper and more permanent ache I experienced as I witnessed first hand the sort of lower level functioning that is inherent for Kenny in stressful situations and how that impacts him living as a newly minted legal adult. 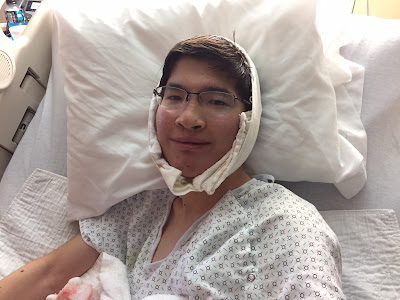 Fetal Alcohol Spectrum Disorder is debilitating, yet invisible.  The brain malfunctions in "predictably unpredictable" ways, never responding the same way twice in any given situation.  Throughout his hospitalization, both before and after anesthesia, Kenny was asked to state his full name and birth date, and every single time he struggled to access that information in his own brain, responding almost as if questioning if he was correct.  Stress makes that accessing even more challenging than it normally is.

There is a fine line to walk as the mother of an adult child with special needs as you deal with others who can't see your child's disability.  Do you step in and answer for him?  Do you allow him to fumble his way through and then correct information?  Do you offer an explanation of why this seemingly bright, capable young man can't follow the simplest of instructions but seems to understand?

I spent a great deal of time trying to assist others and help them see that Kenny thinks he is catching all their information, but when asked to immediately repeat it, he had literally comprehended nothing.  When it comes to medical care instructions, this can be life threatening.  I have thought often this week that having a child with special needs can force an introvert like myself to step out of their comfort zone.

There is an awkwardness and a learning curve to these sorts of interactions that both Kenny and I are training ourselves how to maneuver around.  He is sensitive to my role and how interjecting myself into conversations or situations can lead others to view me as a meddling, overbearing mother, and I am sensitive to his need to do as much as possible on his own and yet be the support he desperately needs regardless of whether others perceive that need or not.  Several times throughout his hospital stay Kenny spoke up and said, "My mom is my medical advocate." and though that wasn't heard as we had hoped it would be, it was a start on this next leg of the journey he and I are taking together.

Asking others in the room to be quiet and then getting right in Kenny's face so he can focus and take in information from just one voice, "reading" his expressions so that I can tell if he has really absorbed instructions, needs more clarification or to hear something it all over again, and affirming his need in times of stress to revert to a much younger version of himself are all tasks that are part of being the mom of an FASD young adult.

What this past week has shown me though, is how terribly vulnerable our son is, how truly incapable he is of being able to take care of his own needs, and how he will need someone to walk alongside him the rest of his life.  The problem is that this seems almost paradoxical when one meets Kenny, because he is highly intelligent and that is exactly how he comes across.  There is no "catch all" term one can use that brings instant recognition in others of the variety of ways in which he is disabled...and yet isn't.  Words like "Alzheimer's" or "Autism" are easily recognizable by others and certain behaviors and deficits are immediately understood, but FASD does not have that sort of general recognition, making it harder to explain to others.

And you know what?  I wouldn't trade him for anything in the world.  I am growing in ways I never imagined I would as I parent Kenny, and he is growing in ways we never thought possible with the numerous challenges he has.  Daily our family is in the presence of innocence and are reminded of what goodness really looks like.  Kenny calls all of us to be better versions of ourselves, and to be tuned in to others around us who need to be embraced and loved for exactly who they are.

And we are helping him to become the very best version of himself that he can be.

Sounds like exactly the way God intends for all of us to be with one another.