The Annual Battle of the Garage Was Won!!

For those of you who have followed our blog for any number of years, you might be familiar with our Annual Garage Cleaning Marriage Battle, the only thing Dominick and I ever truly go to war over.  You see, he is a "Hoarder in Training" and I am a "Minimalist Chucker"...meaning chuck everything in a pile and get rid of it! Hahaha!

This year, Dominick and I sat down to have the Pre-Spring Fling conversation, and the idea was brought up that we need another storage shed, and maybe he'd like to build one.  Hmmm...not a bad idea, until I really started thinking about it, and then I put the breaks on that.

"Whoa!!!  Wait a minute!  We already HAVE to sheds AND a garage!  How about we save the money and just do a major clean up and get rid of a lot of stuff?" I asked.  I then added, "I am finding it hard to justify spending money we don't have to build a shed to hold more junk (OK, so I really said "crap") when half the stuff we are storing we haven't touched in years, which indicates to me we don't really need it at all."

Sooo....a couple of weekends ago we tackled it, and we tackled it hard.  Sadly, I don't have the wretched "before" photos to share, as the kids got busy before I could get out there to take a picture.  However, it took us two solid days to empty both sheds and the garage, sort through things, create piles, and re-assign items to new locations.  It was a major "win" in my book, almost 20 years in the making, and I am thrilled!

Here are a couple of "semi-before" pics: 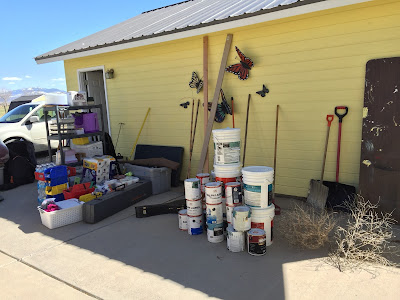 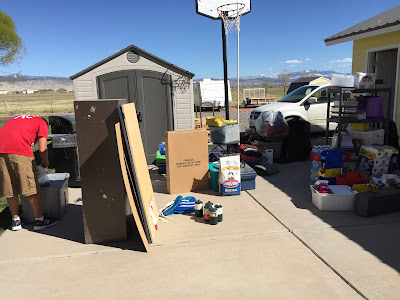 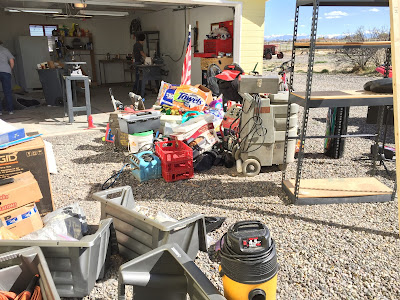 This was not at all as bad as it was at its worst, it was early on in the emptying process...the two sheds were packed with business paperwork for twenty years, old school work that I was keeping in case we are ever checked on, etc.  It was time to trash it all.

Now, admittedly, with a family of 7 and a small supposedly two car garage (One of those that really and truly couldn't easily fit two real sized cars side by side and actually open a car door), we do have additional storage needs versus smaller families.  Winter sledding gear, bikes, larger appliances, no decent pantry inside the house all lead to us needing a tad bit more space.

However, my real "urge to purge" and Dominick's relatively easy agreement really stemmed from the realization that Matt was desperately in need of some real shop space.  As he moves into the next phase of his "tinkering" and learning, he needs to have space other than in his bedroom so he can spread out and work on projects.  He needs tools and space to store them, and his 3D printer is quite loud so if it has to run for several hours, he would like it away from their study area.

We ended up taking two full trailer loads to the dump: 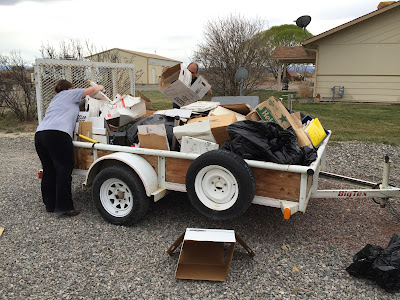 The garage project was a great opportunity for Dominick to see first hand how seriously effected Kenny can be. Though, of course, Dominick has often worked with Kenny, it is in easier and more structured settings, and many times other kids are guiding Kenny and Dominick hasn't realized it.  Kenny's adaptive skills are wonderful, he takes cues easily from others, etc.  But this was a very difficult setting for him to work in, there was chaos in the environment, and clearly chaos in his brain. Unlike the other kids, Kenny can't walk into a situation like that, select an area to start cleaning or emptying, and begin working.  He can't "see" what needs to be done or plan it out in his head.  He is a very eager and super hard worker, but needs to have one on one supervision to be productive, and this was a perfect example for Dominick to see how he struggles more than we often understand. 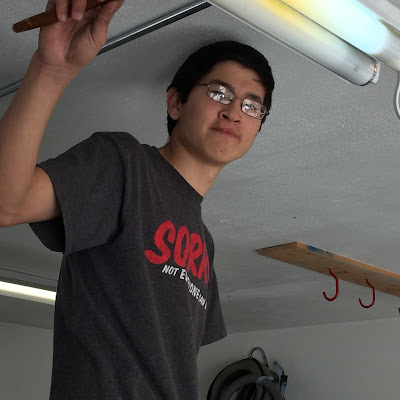 No kidding, during a two hour period, I stopped counting at 13 times I personally had to re-direct Kenny.  He would start a task and his attention would be drawn away, or he would have no clue what to do if I told him to clean a particular area so I would have to give him step by step instructions, but he would forget so I would need to remind him again, giving directions to him in ever smaller increments.  His auditory processing effects him far more than we realize, and we had to turn off the radio every single time we talked to him, or he would not pick up what we say.

However, it was instructive for Dominick to witness more of what I personally deal with every day with Kenny, and he and I both realized it might be helpful if I got more training in how best to work with Kenny as he matures, and then share that information with Dominick for when Kenny moves more into working at the store with him.  There are things I am used to doing automatically, that Dominick hasn't ever needed to do in working briefly with him in less distracting settings, so we are recognizing  we are moving toward a new phase and we each need to learn more. 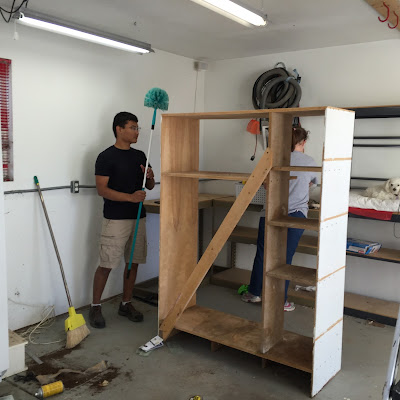 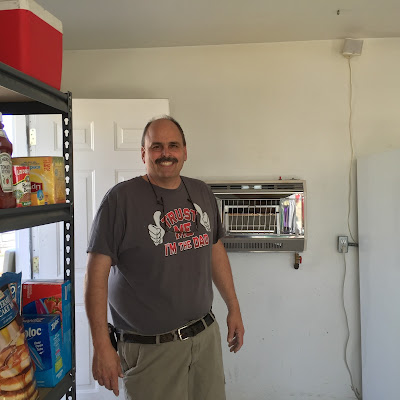 He looks reasonably content with the tossing, doesn't he? ;-) 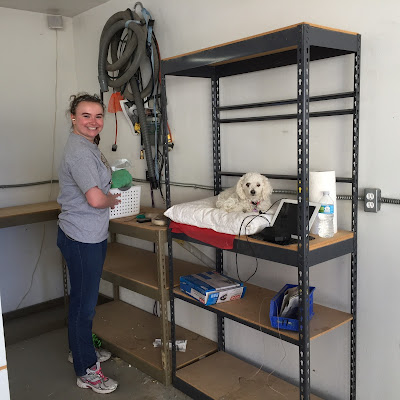 Oh Good Grief!  That dog is such a spoiled little princess! 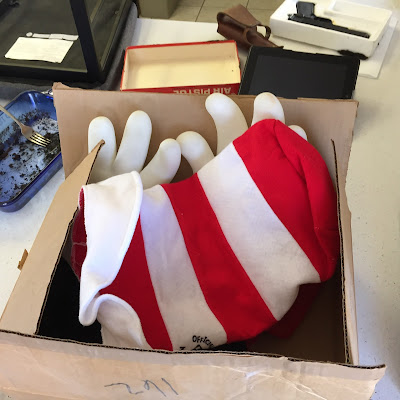 You never know what you are going to find...a 12 year old Cat in the Hat costume worn by Dominick when Matt and Josh where little! 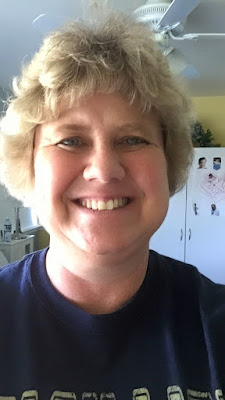 It takes so little to make me happy...so very little...just a little organization and cleaning and I am one thrilled woman! 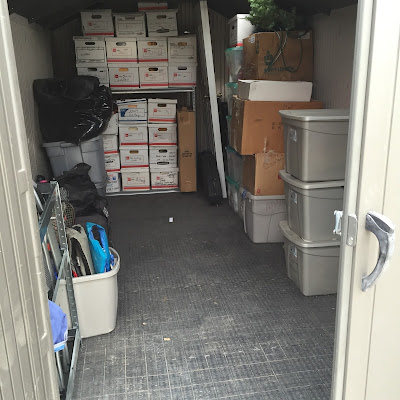 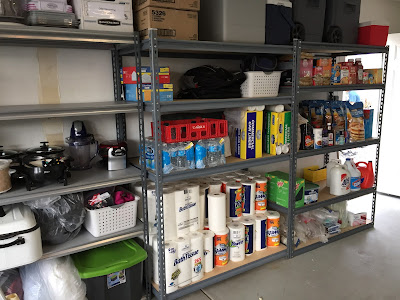 Ahhh, I can get to my supplies now 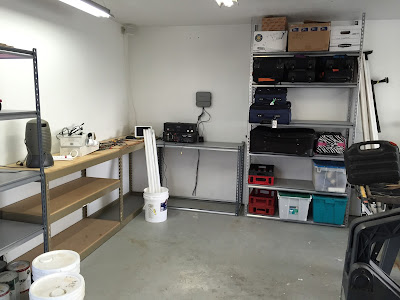 How long will it last?  Oh Lordy, who knows!  I long ago gave up expecting more than a month or so.  However, for the moment, I feel somehow cleansed.  It is as if Marie Kondo herself visited our home and "KonMari'd" it.  We kept only those items that bring us joy.  Well.  That might be a stretch.  I am sure I get little joy over 4 different sizes of Igloo coolers, but they sure are useful when needed!

Regardless of how long the KonMari magic lasts, I am filled with peace and tranquility as I walk into my now spacious garage.

Ob wow! Good work. I need you all to come over and transform my garage. I still expect it to last for ever. Lol