There is a smattering of things I wanted to share here, some of which will be of no interest at all to many of you, some of which might be just for kicks.  I try not to post too much homeschooling stuff, because I know that for many who might read the blog it is completely uninteresting.  However, there are a few folks out there who read and homeschool, and some of them might want to know about a couple of things.

First, a couple that are for everyone...we found a couple of super interesting very short video clips on YouTube from National Geographic.  One of them illustrates a totally fascinating article we read in a recent issue about Earth's population reaching 7 billion people.  No one I spoke with believed me that NatGeo had shown that all the world's population could fit mathematically in roughly the space of Los Angeles.  I think most of us consider NatGeo a fairly accurate publication, and it helps put our world population in perspective.  Now, of course, where all of us could fit has nothing to do with if the Earth itself could sustain us.  However, it does make you stop and think.  It's quick and well done, as is the second video clip about what the statistics show is the "typical" person in the world...a startling and also very interesting super short clip.  The kids and Dominick all thought this was good, check them out:


And the second video clip:

Sorry I can't get the videos to embed tonight so you can view them right here, but go check them out, they are worth it!

On to item two, which is a curriculum mention.  We have been using a new literature curriculum which we are quite enamored of.  It can be found here at www.mosdospress.com which is a Jewish textbook publisher. 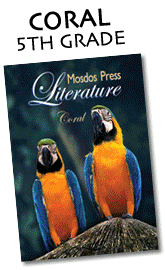 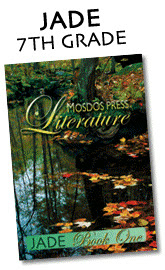 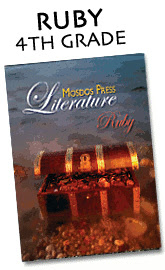 Why do we like this so much?  Tons of reasons!  This anthology series is different from any other I have seen.  It is secular, and yet deeply moral in it's approach.  The stories included are beautifully presented and highly engaging.  All five of the kids using 3 different levels have raved about how much they enjoy each of the selections and can't wait until literature time. Seriously...when does that ever happen?  The accompanying workbook has solid vocabulary work, graphic organizers...but not boring, easy "fill in the blank" ones, these require real thought, and analyzing the selection that was read.  What I love most about this series is that it introduces the kids to some of the very best authors ever, both old and more modern, and even in Matt's at the 7th grade level he will sample Robert Frost, Ernest Hemingway, John Updike, William Saroyan, Emily Dickinson, Ray Bradbury, James Herriot, O. Henry (I love O. Henry!), Carl Sandburg, Walt Whitman and more.  The lower grade levels have equally stellar authors, and there is SUCH a difference between really good writing, and typical writing for kids today.  I am sorry, I know it is entertaining to a degree, but Judy Moody or Diary of a Wimpy Kid isn't all our kids ought to be reading.  And yes, our kids DO read such stuff too sometimes, but I love that in addition to that sort of lighter fare they are really enjoying the  richer content contained in this textbook series.  Also, it is leading them to explore different authors.  The very first story in Matt's was a short story by Rudyard Kipling, and this past library trip he brought home Kipling's "Kim".  Whether he wades through the entire book with its older language or not isn't important, but at least he was opening up to authors he had yet to read.

The teachers manual is excellent, and walks even the least experienced teacher/homeschool mom through the process of explaining literary tools used by writers, and to ask questions to stimulate thought about passages read.  If anyone is looking for something like this, I can't recommend it highly enough and neither can the kids who all agree they don't want to use anything else for reading now that we have found this.  There are textbooks for 4th - 8th grade.  After that,  I am not sure yet what route we will go.  I'll cross that bridge when we get to it :-)

On another note, we are considering trying a program with Kenny called FastForward, as administered online via www.gemmlearning.com .  It is for auditory processing, and during the past ten years or so I have read of many adoptive families using it with their children with a fairly decent success rate.  The problem?  Man, it is expensive at $500 per month for approximately 4-5 months.  Whew!  That is a chunk of change.  Our homeschool program is trying to see if they can bypass the school district somehow and get testing done or approval for this for us...or something like it...but it isn't looking good.  The system is just too tough to maneuver through, and they have a surefire "out" with it because of our Two Strikes...non-native speaker and low IQ.  So it looks like we are going to be forced to pursue help on our own outside the system.  Recently I saw Kenny's old speech therapist from public school, and when we chatted and I told her what we were thinking could be wrong, and I asked her if in her opinion we were way off base and it was as if a light bulb went on for her and she said "Of course that could be part of it!  That makes so much sense now that I think about it!"  and she assured me that we ought to look seriously at it for him.  As she probably has the most experience working one on one with Kenny other than us, that was a little reassuring for me.  So, now we just have to find a way to pay for it, still working on that.  If anyone reading this has any experiences with FastForward, I'd love to hear from you before we commit to something like this.

Fellow blog reader and dear friend (Aren't I lucky to know her and benefit from her wisdom in real life??) Lael started working with Matthew today on his abysmal writing mechanics.  Matt is usually Mr. Quiet, and it is fun to watch him interact with Lael, as for some reason he becomes silly and very animated with her.  We are really grateful to her for helping him (and me!) in this area, as I have tried everything recommended and nothing has helped.  Lael has some new ideas which might work, and I am hopeful we will see some progress eventually using a new approach.  Along with the kids, who are participating in a writing even through our library, I too have decided to take a two night writing class.  I've never had writing instruction before, and I think it will be interesting to learn and practice right along with the kids.  I have no idea what I'll write about as I am not imaginative enough to write fiction or anything like that, and I am most definitely not a poet.  I guess we'll see if anything comes of it.

That's about all!  See?  I told you this would be a boring post! That's OK, I never know when something I share might help someone else out, as I have been helped a million times over the years by others' posts and blogs.  Here's hoping you have a great weekend...and that the Broncos win! Hahaha!

You have a strange definition of boring. I have never been bored by your blog but instead stimulated a thousand times over.

As for the writing class, since the class is about writing your life story, you are miles ahead of the other folks who will be in the class, and I will whisper ideas in your ear should you run short. I am sure your other blog readers could pick out their favorite incident to expand or suggest topics you have not yet covered.

As for Matthew being silly, its all his fault. I am serious and conscientious and would never participate in anything other than solid scholarship (and perhaps a pillow fight in the interest of writing a realistic scene--now which pillows are full of feathers, Cindy. They make a great story. Do you know what a torn pillow full of feathers can do to a home?)

I looked at your site meter--275,487 visitors. I wish we had all paid a penny a visit. I would cover the cost of Kenny's internet program. Instead I wonder what creative ways we could find to help you and all adoptive parents who need such help. I'll give it my best shot--right after I run to Wally World to get the super duper 10 gallon size water guns Matt and I will use to create a realistic gun fight for his novel.

Love you all,
Lael

FastForward has been around for a long time. It was big in the 1990's with the children from Romania. A number of kids used it and it helped. Mine were unable to get anything from it. Before you sink a bunch of money into it see if you can get a trial runt o see if it would help Kenny. It has been awhile but if I remember right, I had someone evaluate the girls before trying it. It might have been a speech therapist who had worked with it.

Dear Cindy,
For home school high school, I went to encyclopedias to the articles about American Literature and English Literature and World Literature. Then I coordinated whole books with the sections in the boys' history books. There also is a book called "Let the Authors Speak" probably out of print, but it shows books with their genre, reading level and quality in a very brief form. I believe that for H.S. you have to move away from anthologies to develop a true appreciation for literature. Great post!
Sherry

Sherry, I agree with you 100% about moving away from anthologies, and in fact would have preferred to never use them in the first place. I could have easily done that with Matt and Josh, but found quickly that Angela, Olesya and Kenny had a TERRIBLE time locating reading material that was age/grade level appropriate and interesting enough to grab their attention. I think this was due to being adopted at an older age, and not developing strong interests of their own. A library full of books was too overwhelming, and though they tried, they never came home with anything they actually finished reading very often. Taking the decision out of their hands until they have read more variety and have a better sense of what they enjoy has become better developed. Thanks for the suggestions! Cindy