Kyrgyz Klaus has come to town!! 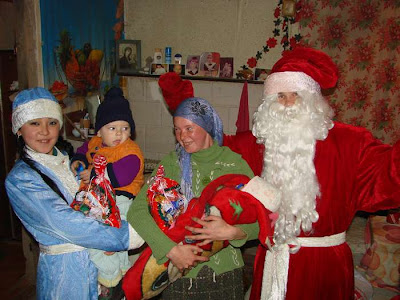 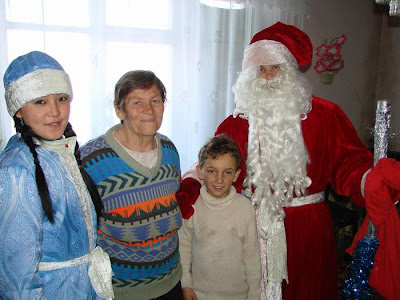 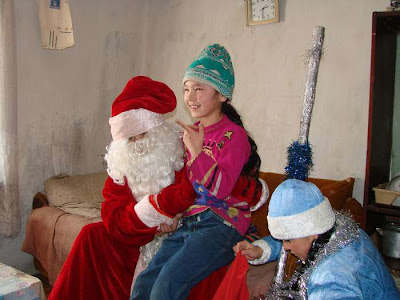 I received some wonderful photos from John Wright over at http://www.actofkindness.blogspot.com/ of group #2 receiving their Christmas Surprise. You can check out the full story at John's other blog http://simpledreamsinfo.blogspot.com/search/label/u%20did%20it where he has all the photos as well as tells the story so wonderfully.
You know, this was a very humbling experience for me personally, as I initially started the whole "LaJoy Christmas Challenge" on a whim, thinking that if we raised a couple hundred dollars over the next month it might help John be able to do at least a little something for the kids. I also thought it would give my own sons a little taste of the Christmas spirit in a way that had nothing to do with them benefiting. And then, quite honestly, I thought it would be fun to joke about the pie in the face that never happened! Hahaha! Little did I realize that in a mere 7 days you all would prove me 100% wrong, times two.
But the humbling part comes not from you, but from the kids in Kyrgyzstan. As you look at their faces in these photos and realize that for many of them it is the first time they have been out to eat in a place like this...or any place for that matter...how can you not be humbled by contrasting that with the life we lead here? Where we think NOTHING of dropping in at Mickey D's for a burger and fries anytime we want. To try and understand that the trip in the van alone was an event is just almost beyond our comprehension.
Their lives were so aptly described to me once as being in prison for kids, for that is what an orphanage is. It sure doesn't differ much from prison...you are told when to eat and when to sleep, you are not allowed off the grounds, you are given the bare minimum in terms of stimulation and opportunity for intellectual growth, your ability to make the most menial decision for yourself is stripped. You think not? Try adopting an older child who spends his first 24 hours with you THRILLED beyond belief at flipping a light switch on and off all by himself...at 8 years old that was one of Kenny's first moments of having control over his environment, and we sat there in amazement watching him. On...off...on...off. Wide grin...on...off.
These kids in the following photos are just as precious as yours or mine, they just have no one who considers them such. Your efforts proved otherwise, your efforts were about far more than providing an outing or Christmas. It was about letting them know that they indeed are cherished, that they matter to someone. So they got a burger and fries, a trip to the circus which no doubt thrilled them all, but what they really got was a gift from the heart from you. You made them feel special, even if only for just one day. For many of them, regardless of how old they are, that may have been the only day of their entire lives when they felt special to someone. That's worth a heck of a lot more than a burger and a coke.
Some were kids in the orphanages, a few were kids at risk of landing there but still with families who are struggling mightily. So take a look at what your efforts hath wrought: 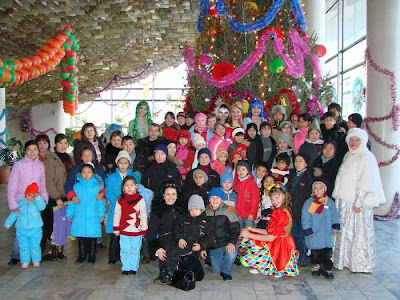 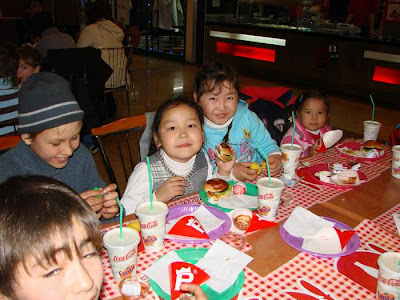 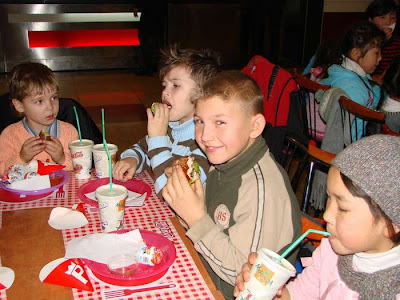 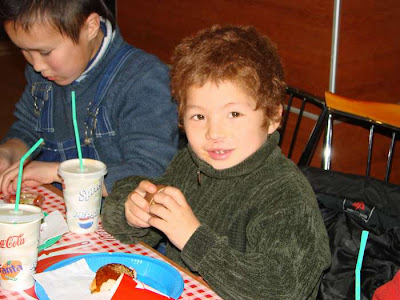 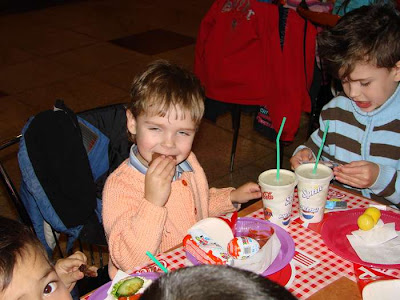 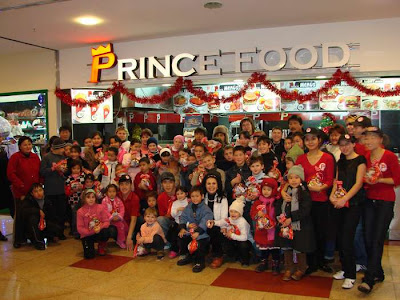 The entire gang with gifts in hand and full tummies!
I had hoped to use this experience to touch my own children's hearts, but just a few night ago Matthew let me know that he already has learned some very important lessons in life. We were watching our new favorite TV show...pretty much the only thing we watch at all on TV..."Extreme Home Makeover" when Matt looked at me and said "Mommy, it would be cool to get a house like that because they really make neat rooms. But I would never want to get one because all of these families have had something terrible happen to them. I'd rather have our house and not have anything bad happen to any of us."
Why do I always underestimate my sons and how God is speaking to them? While they may not always identify it as such, they sure do hear what's being said to them!!
I hope you have enjoyed the photos, and that you wandered over to John's photo display to see the rest and read more of the story.

It is sooo important to remember to slow down and spend real time with your family...especially the old husband! When Benjamin was in the NICU and Keith and I had to drive to see him every night...it was just him and me in the car for 90 minutes and us with Ben for about an hour..I was reminded of that. It is soooo easy to get caught up in the whirlwind of things to do!

Oh...my heart came to my throat..."that may be the only special day of their lives..."

I just want to bring them all home. All of them.

How many are educated on the words, but still do not understand?

"...but yesterday I really felt my lack of education in a profound way, it was as if I realized I have suffered a great loss and only just recognized it as such".