It has been a long while since I posted much about adoptions in Kyrgyzstan.  Sadly, it has been because there has been no movement at all, and 60+ children who were previously matched with adoptive parents are still waiting to join their waiting families.  Three years and counting, and children suffer the consequences of a government's inability to function efficiently.  They also suffer due to the misguided and irrational logic of organizations whose opinions reflect their utter lack of understanding of the incredible harm that comes from years of institutionalization.
Even more shocking is that these children, many of whom have multiple medical issues that need immediate attention, pay the ultimate price for adults who can't place their welfare first.  They will never have the chance to have the kind of life they could have had should intervention have come quickly and early on in their lives.
And some of them die.
There is no dramatic intention there, it is truth.  Let me share just one story...
Suzanne Bilyeu is an ordinary wife, mother and pediatrician who was faced with unfathomable choices that would tear out the heart of any human being.  She and her husband tackled the paperwork, and were matched with a child, a beautiful little girl named Altynai whom they had planned to name Addison.  When Altynai was a tiny 3 month old baby, they traveled to Kyrgyzstan to meet her as part of the adoption process, expecting to return 2-3 months late to bring their daughter home.  Upon returning home, Altynai experienced her first illness, and within a month their court date for adoption finalization was cancelled as the adoption process ground to a halt when adoptions in Kyrgyzstan were "temporarily" halted.
As the family waited and months passed, it became increasingly obvious that little Altynai's physical condition was rapidly growing worse.  Measurements indicated that she had  hydrocephalus, and her head circumference continued to increase as fluid pressed on her brain, causing unknown pain...and untold damage.
At 13 months old and due to the extraordinary advocacy work on the part of her Mom, a visiting medical team performed the life saving surgery that would provide Altynai with a fighting chance.  I call Suzanne Altynai's Mom because I know what it is like to be separated from your children for years at a time, knowing in your heart that God has already matched you and no court on earth can ever change that.  We moms, whether legally recognized or not, will do all that is humanly possible for our children, whether they reside with us or not.

Unfortunately, by the age of 16 months, it was clear that the surgery was not going to yield the hoped for results, and the decline in Altynai's health left her able to barely lift her head, and with vision and hearing loss.  Her parents and so many other waiting parents worked tirelessly (and still do) to convince the Kyrgyz government to free their children to come home to the loving families that awaited them.

At 28 months old, Altynai's condition worsened to the point that she once again had emergency surgery to relieve the pressure on her brain. It came too late, and a month later, a much loved little girl died in the arms of an orphanage caretaker.  Altynai would never have the chance to giggle while being tickled by her Mommy and Daddy, she would never hear the words "I love you" whispered softly in her ear, she would never be able to walk and talk, ride a bike or throw a ball.  Her life was cut short, and it was 100% avoidable.


I was blessed to have a few phone conversations with Suzanne as she worked through the emotions of this heart wrenching situation.  I was able to see the heart of a Mom, one who was powerless to help her daughter who was so far away and in distress.  I could do nothing more than lend a compassionate ear and  murmur a few words of encouragement as we both recognized the hopelessness of the situation.
Suzanne handled it all with far more grace than I ever could have.
That grace now extends towards the families who continue to wait...families whose lives have understandably changed over the past 3 years, whose financial situations have possibly been affected by the economy as well as the ongoing efforts to bring their waiting children home.  Suzanne contacted me and shared a little about her plans to raise funds for the remaining waiting families, so that their adoptions could be finalized should Kyrgyzstan release them, and that financial need would not stand in the way.  She established a fund as a lasting legacy to the life of Altynai...the child whose own government and legal guardian completely ignored.  Please check out her web page at:  http://www.altynailegacyfund.blogspot.com/  .  There you will read just a handful of stories about some of the other waiting families, you will see the faces of the children they long to bring home.  If you are so moved, please donate to this cause....you will be helping families whose Herculean efforts to bring their children home are inspiring.
You will also help Suzanne to know that Altynai's life was of value, that she was not some anonymous orphan who died a silent death and will forever remain unrecognized.
Remember Altynai... 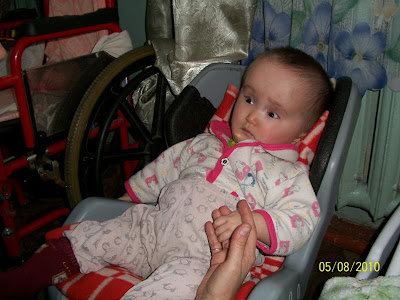 There are no comments here yet. How can one reply to indifference, conflict,deliberate apathy? All over the world we give lip service and only lip service to loving and caring for children while war, starvation, stale mates, etc. leave children unprotected, vulnerable, and too often dying while we dither and differ.

Thank you for both updating us on the Kyrgystan stalemate and giving us a way to respond to the tragedy.

It makes me incredibly sad, and then incredibly angry when I read stories such as this. And you are correct, no one is thinking about the children when they decide to 'suspend' adoptions. They should at least look at all the ones in process on a case by case basis and decide what is in the best interest of each child (as if there was any doubt that a child is better off in a family than in an orphanage). Unfortunately, the politicos cause the ones who wait to suffer needlessly for even longer. Breaks.my.heart.