A Special Kind of Loneliness 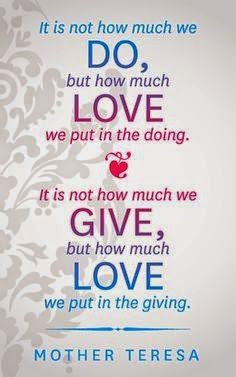 She walks to the car, her smile attempting to hide the trembling chin.  Angela had just finished her second afternoon of volunteering at our local nursing home.  Her supervisor came around to my window, and explained that one of their residents who Angela had visited with was nearing death, and she gave me a knowing look.  I thanked her for her time with Angela, then we pulled away.

Quietly, I asked if she was OK, and grabbed her hand to offer comfort for what I knew had to be a very hard moment.  We drove to pick up Olesya, who was just finishing her second shift at the animal shelter, filled with exuberance about her time spent with the very kind staff and enjoying caring for the shelter pups.

Upon arrival at home, Angie walked toward her room, but I grabbed her hand and pulled her past her brothers who were doing dishes, and into my own bedroom.

"We aren't going to blow this off, come snuggle with me."

We crawled into bed and she rested her head on my shoulder, tears allowed to fall.

"What is hurting the most right now?" I ask.

A few moments, then she responded, "It's not about death, I am OK with that." she explained.

"Then what do you think it is?"

No response, but her shaking shoulders told me what I couldn't see.

On a hunch I asked, "Is it the loneliness?"

Oh yea, that was it.  A special kind of loneliness that perhaps only people who have experienced abandonment in institutions can understand, where physical needs are met, but souls are left unattended.  That Angie knew all too well, and it was breaking her heart, though I doubt she could have named it herself.

This volunteer gig is going to stretch her and feed her in unanticipated ways.  Her first few months home I had witnessed several encounters she had with elderly folks, and saw a special tenderness come over her.  Angela has a comfort level with seniors that few have, and I vowed then that when she was old enough, I was going to find a way for her to live into that side of herself a little more.  We have talked about her volunteering for the past year or so, and  I knew I had hit on something that was speaking to her heart when she kept urging me to make the arrangements through the year.  Finally, our schedule cleared enough for timing to make sense.

This is Angela's first true foray out into the world alone.  I had her handle all the paperwork and arrangements herself, encouraged her to make the follow up phone calls and visits, and waited outside in the car while she introduced herself.  That may not seem like a big deal for an almost 18 year old, but our kids are on a totally different timeline, and she was finally really ready to take these first tentative steps on her own.  I was proud of her as I watched her walk confidently into the nursing home that first afternoon, and even more pleased when she came bounding back in two hours later, filled with stories of how she had spent her first two hours as a volunteer.

What I hadn't expected was the enormous impact it would have on her faith. 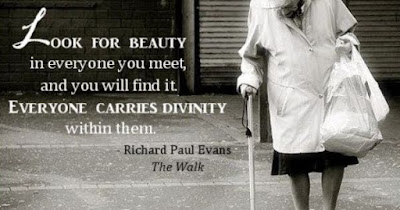 The very first words she blurted out after that initial volunteer shift were, "Mom, this is the most spiritual place I have ever been in.  God was everywhere, and I was so surprised.  I kept telling myself that I wished you were there to feel it with me.  This is the best thing I will have ever done in my life, thank you so much for suggesting it, I wouldn't have ever thought of it but I really belong here and I can't wait for next week."

She then went on to share about various residents she had spent time with, how she had encountered a Ukrainian woman who also volunteers and she had been thrilled to speak Russian with her.  I heard about her hesitancy to read out loud because of her accent and how she got a kick out of one woman who kept leaning in and touching her arm.

"You are so right, mom, people do need human touch...I could see it in almost everyone there!"  She exclaimed.

This second week was more about the wisdom shared by a dying resident, about the aching loneliness of those who are never, ever visited (the majority, it seems), and about how every moment there matters as Angela brings her smile, her laughter, and her hugs.

Snuggled with my precious daughter whose tears threatened yet again, I asked her if she thought this was going to be too hard.  "Oh no!" she said vehemently, "I totally want to go back.  It is just hard, but that's OK. I can do this, and I love them all already.  I don't know if I will ever get used to why people don't visit their family though, but I want to be there."

This young woman has a strength and sensitivity to her that truly only comes from having suffered.  As I curled up into her, holding her close, I felt a mix of emotions.  I spoke quietly about how she knew what it felt like to be left alone someplace with family who never showed up.  I spoke about how that made her uniquely tuned in to what the residents at the nursing home were feeling, how hard it is to feel trapped in a place with nice enough people, but little freedom to come and go as you please and know one to whom you were special.

How grateful I am that none of our children are still abandoned and alone in the world!!  How humbled I am by the courage each exhibits in their own way, and by the ways in which they so easily see the Spirit at work in their lives.

And how very, very much I love and adore each and every one of them.

I have a strong sense that this is only the beginning for Angela, that these last two visits very much were about her calling in the world, for either vocation or avocation.  She has many gifts, an unusual awareness of the hearts of others, an ability to "read" the human spirit at a level many never achieve, and an abundance of love to offer.

Watching our kids ever-so-slowly begin to figure themselves out, stretch their wings gradually, and move tentatively into the adult world is exciting.  Loving them through the bumps along the way is a blessing. 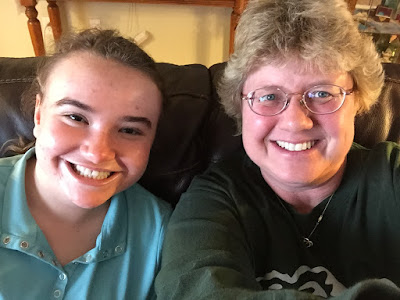 What a blessing for Angela, as well as those whose lives she touches in the nursing home and other places along her journey. Our daughter, adopted at 10 1/2 yrs discovered her love for caring for the elderly by taking the first CNA class in High School. Maybe that's the direction Angela is headed. Our daughter is attending jr college, which has been a challenge, also have been adopted internationally and learning English as her second language. She hopes to get into the nursing program and is taking prerequisites for that. She's needed to take fewer credits, as she needs to handle the material differently than probably most would...but she's doing all right. She recently got a job in a major hospital near her college campus as a CNA or PCT, as some refer to it. She's on the surgical floor and absolutely loves going to work. She enjoys the variety of ages now, as working only with the elderly, though she very much enjoyed helping them with their personal needs, was difficult for the same reasons as Angela probably feels. The CNA training is a lot of hands on and practice, and at least around here, there are always needs for people willing to do that job. My husband suggested nursing to our daughter. I had my doubts she was going to be able to do the academics, but her IEP went with her from HS, and at the jr college level, there are plenty of helps. She knows how she learns and knows and is willing to ask for any help she needs. I think that's a huge key to her success. She can be a real hoot sometimes, still misusing the English language...but she's come a very long way. I know your Angela has, too! Best wishes to her and to all of your kids.
And Olesya's cake is amazing!
Nancy in the Midwest