It's Halloween Night, and all are tucked away in bed after a fun evening of Trick or Treating.  Josh was the only one to dress up, but the rest of us enjoyed walking around the neighborhoods with him.  Here is a picture of his costume: 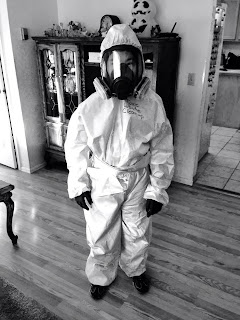 What a nice end to a great month!  Nothing all that spectacular about it, and I know most who would look at our life would probably say, "Eh..." or run screaming in the opposite direction.  But especially this week, it has been a time of such happiness in the ordinary for all of us.  The kids are relaxed and enjoying the downtime that has arrived with volleyball behind us, we are all settling into the late fall nesting, and we have had a few breakthroughs which, though small, are in some ways enormous.

Kenny is pursuing being a junior camp counselor next year, and has received an encouraging email and documents from the gentleman who runs the camps.  He spent two full nights going over the information, taking this so seriously, reading the suggested qualities of a counselor, what a counselor should and shouldn't do, highlighting things.  He sat down with me late the other night and we talked a lot about it, and he pointed out that he knew he would have to work on being the adult and not wanting to join in with the young kids or forgetting what his role would be.  It was insight I wasn't sure he would have about himself, but he was able to pinpoint his weak spots, and he is determined to work on them.  He will be 15 in a couple of weeks, but in many ways he is very much 12 or so, even with his own personal assessment he places himself there.  Kenny is just now getting into Lego building, and for his 15th birthday he wants a police station kit or a small kit with a police car and a regular car.  Not what most 15 year olds would be asking for, but at home he can be exactly who he is, and that is working for him.  He really IS maturing, and we see it in many ways.  His area in his room has gradually grown much neater, he is starting to be more aware of his responsibilities as well as his deficits.  Kenny LaJoy is just on his very own timetable, and the mixed maturity can really put us off balance!  One moment it is 60 year old Kenny before us, and the next it is 10 year old Kenny.

Now that we are a couple of months out from our decision to homeschool 100% independently, we can all see what a great gift that is for us, even if it is going to prove to be very hard financially speaking.  It is something I can't quite explain, but is sort of like we are now free to simply learn, and learn at whatever pace we want, studying whatever we want.  It is so freeing!  I'll, of course, document it all appropriately, but we are no longer fixated on the number of hours we put in, if we're doing everything in a certain way that would be "approved", and it all feels just plain old different.

Yesterday, I had a Teacher-Student Conference with each of the kids, taking about 45 minutes with each one to just sit and talk about how school was going for them, what they liked and what wasn't working for them, etc.  We talked about areas of strength and weakness, about what they'd like to study in the future, and so much more.  What was SO cool was that Angela finally got it!!  She has been feeling pressured, I think, because she is behind her age related peers in terms of grade level.  We talked so much about that, and we talked about what the next few years of her life were about...working hard on foundational skills, such as reading and writing, etc.  But more importantly, we talked about the exploration she missed when she was young, and how this next 5 years or so were all about her trying new things, ANYTHING at all, discovering who she really is and what she enjoys. I threw out what I see her gifts are, and ideas for things that branch off from that.  We looked at possible elective classes she could take, just to get her thinking, and like I told all the kids, it didn't have to be traditional...anything they wanted to learn about I could make a unit study or standard class out of, the only thing that would limit them was their imagination!

For the first time, I think Angela was able to grab hold of the idea of exploring anything under the son, and the list I got from her at the end of the day was filled with topics of interest to her!!  It was so touching to me to see her grab hold of the idea that she didn't get to explore as a young kid, but NOW is the time for her to to that very thing!  The flood gates opened!  Such excitement in her eyes, it made ME excited for her.

Using Teaching Company Courses, Merit Badge Books, and other web sites, they all compiled a list of their very own.  Here are just a few things on the kids' elective lists:

Their lists were all far longer than I can type here, but even these were enough to boggle my mind.  I have my work cut out for me, researching curricula or teaching tools for these subjects!  Some of them will be groupings, like all the boys want to take the electronics course, both the girls want to take interior design, etc. They are all really enjoying the Teaching Company's Great Courses, and several things they mentioned were from their catalog. Wish they weren't so darned expensive, but they are SO SO worth it!  So we might be building courses around some of those, and a few other ideas.  Not sure exactly how all this will work out, but we'll figure it out somehow.

But what made my heart sing was when Angela put at the bottom of her list, "I'll be adding to this list as the years go on!"  Many might not understand how incredibly challenging it is for kids adopted at older ages who have been institutionalized for significant parts of their childhood to dream, imagine, reflect, figure out what they like and who they are.  Olesya has done it far more easily than Angela or Kenny,  but we are finally at a place where they have some interests to pursue.  That is a big leap forward for them.  Now my work begins...

I am gearing up for my first concert Saturday with the DelRose Choir (Sweet Adelines).  To say I am nervous would be an understatement.  This is difficult, demanding musical work which is more fun than anything I have done in a long time, but is not a walk in the park.  I have managed to memorize just about all the music, or at least enough they are going to let me participate 100% in the entire concert, which was unexpected.  I'd feel a lot better about it if I were up there in jeans and a Tshirt, but the whole poodle skirt thing is freaking me out a little.  Dumb, I know, but I am not comfortable being "noticed", and actually much preferred wearing a choir robe when I had to sing in front of everyone in church.  I remind myself though that it is important that the kids see both Dominick and I putting ourselves out there to try new things, and to do things we are not always comfortable with. I'll admit though, I am absolutely in love with the barbershop sound, and always have been, so this is a treat of a lifetime for me.  A Capella music of any sort has been a longtime favorite of mine, and is probably one reason I also thoroughly enjoy Taize music, introduced to me years ago by a blog reader.  So, the next couple of days with dress rehearsal and performance will be a completely new experience for me!

I hope the happy, sweet fall continues into November.  As we travel to California next week to visit grandmas, we will have a lot of precious time together with no pressure, no serious issues awaiting us back home, no school assignments or constant phone calls/emails tugging at us. We are planning on reading some Sherlock Holmes and some Maya Angelou together, playing cards and other games, visiting and just being together.  Surely there will be some awful, off key singing, some spilled drinks and crumbled snacks, and some sore backs from hours and hours in Jorge.  How lucky we all are to have all of that and each other.
at October 31, 2013

You haven't blogged in such a long time - I hope you're just taking some time to yourself in the run up to the holidays?

Many of the great courses are available at our library. Definitely check yours and see if they have the ones you want! Otherwise, they have big sales fairly often and the discounts are large.

Glad to see you blogging again!