The Joy of Being Found

It's been over a week since I have posted, and that's because I have two or three posts rattling around in my brain that were just not yet ready to be worked out on screen.  I tried to write several different times, then closed the laptop as it just wasn't happening.  Tonight though, I feel one must be written, and I am as clueless as the rest of you why this one, and why tonight. Warning:  Uh oh, watch out, I'm going to get all "churchy" on you with this post, but I urge you, please read on, and please take a moment to view the video clip.

Last week's sermon at church has resided in my soul all week long, and it seems that God has illustrated it over and over again...as often happens when the Spirit is doing something inside us. Have you ever noticed how you just can't seem to escape a particular message?  That it returns to you over and over again in new and different ways to drive the point home?  It has me wondering, what is it that I am not "getting" that God is trying to pound in my head?

Our Pastor is such a gifted and talented preacher.  She has a way of taking Scripture and peeling it apart like a banana, right in front of you, and then offering you the fruit by way of deeper meaning and explanation.  Our Scripture passage was Luke 15:1-7. It's a familiar one, but let me share it here for you:

15 1-3 By this time a lot of men and women of doubtful reputation were hanging around Jesus, listening intently. The Pharisees and religion scholars were not pleased, not at all pleased. They growled, “He takes in sinners and eats meals with them, treating them like old friends.” Their 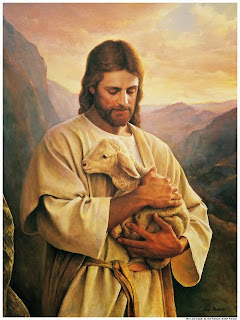 4-7 “Suppose one of you had a hundred sheep and lost one. Wouldn’t you leave the ninety-nine in the wilderness and go after the lost one until you found it? When found, you can be sure you would put it across your shoulders, rejoicing, and when you got home call in your friends and neighbors, saying, ‘Celebrate with me! I’ve found my lost sheep!’ Count on it—there’s more joy in heaven over one sinner’s rescued life than over ninety-nine good people in no need of rescue.

We've all heard this one before, I assume that many folks who've never elected to darken the doorway of a church even once in their lives are familiar with this parable, if only culturally.  In reading this passage, we might identify ourselves as the lost sheep, the one who has wandered far astray and rejoices that God cared enough to search for us, never stopping until we were found.

Have you ever felt so lonely, so in need of human connection and healing, that you wondered if you'd ever feel whole again?  If you have lived at all, chances are there has been some period of time when your soul was so very lost, aching, and left with seemingly nowhere to turn.  Others around you may have taken no notice, and you may not have felt safe enough to share your pain with them.  Words may have been inadequate to express exactly what it was you were feeling, but there was this hollow emptiness that nothing seemed to fill. 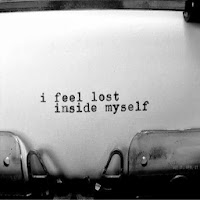 Or maybe you were literally lost, struggling to figure out your next move in life.  Perhaps it was post-high school or college, maybe it was as you were considering a career change but had no idea what direction to take.

I have often felt this way during the course of my life.  I have wandered aimlessly, I have felt disconnected from humanity even though I was encountering people all day long.  I have experienced that wretched sense of just not belonging, no matter how hard I tried to fit.  In fact, I feel that on a regular basis even today, which many might never perceive.

Blessedly, God has placed people in my life regularly who have embraced me, who welcomed me, who rejoiced in my very presence, making me feel precious.  I have been saved over and over again from loneliness, and I know I will be saved in the future by Spirit People who are seeking me. I realize they may not have known they were specifically seeking me, but their hearts were open, and they continued to listen and search.

Recently I have felt this to a certain degree as I have participated in the Sweet Adelines chorus.  Being a homeschooling mom can leave you with a void for adult interaction, regardless of how much you enjoy what you do every day.  I have been lonely, as I have virtually no friends in our homeschooling community.  I have used Facebook at times to fill my day to day social needs with a wide variety of people who have a little of this or a little of that in common. It is often my "Water Cooler" conversation in between subjects or during lunch breaks, but I've needed more...something...and I really had no clear idea exactly what that was.  The very first time I walked through the door at chorus practice, it was a little as if I was that lost sheep, and the women there who appeared to have very little in common with me welcomed me with arms wide open, and in a small way, I was blessed to once again in my life feel "found".

This week I read the Facebook posts from a fellow Kazakhstan adoptive mom, Stacy Segebarth, who started a ministry called Two Hearts for Hope.  Through her ministry work, she ended up working in Korah, Ethiopia, and life would never be the same.  I don't yet know the entire story, but there she met a young man who was orphaned.  You know, maybe a mom who had "heart children" for so long can see it in others, but as she posted photos of herself with this teen, I recognized something that was so familiar, and I knew how her heart must feel leaving him behind each trip.  You could see it in both of them, there was no denying it.  They were mother and son.  Recently, she was able to get this young man to America to live her with family on a student visa, where he is experiencing the deep love of a mom and entire family.

He was found, and Stacy was Jesus for him, chasing her sheep, never letting him go, never forgetting him, and relentlessly loving him.  It brought tears to my eyes to see his Facebook posts, in which he took her family's last name for his own.  Sadly, some thought that to be inappropriate, and all I could think was, "Yee Haw!!!  He knows who he belongs to and he is claiming it!  Good for him!!", and I know it had to touch his family deeply.  Yes, I call them his family, because they have all decided in their heart of hearts they are family, and no adoption decree can ever do more to validate that, it would just be an afterthought.  He is their son, he has been "found" and their family rejoices!

Adoption may be the most obvious manifestation of the lost and unloved being found and discovering that they are indeed precious to someone.  But it makes me wonder, where have I missed the opportunity to be Jesus in the life of someone who was lost and in desperate need of being found?  Where did I not see it, not act, because that lost sheep was not "pretty", "clean", "smart", or any of the other qualities we value so highly in our culture?  There are just as many hurting adults who don't belong, who have seldom been filled with the joy of being found.  I just have to quote her sermon here, as I loved how Pastor Karen Winkel put it:

"Artists in every age have been unable to resist depicting Jesus as the Good Shepherd.   And the variety of renderings is impressive.  It strikes me, though, that the sheep are pretty much always the same.  No matter their size, the sheep are always fine specimens, the kind you'd expect to see depicted in a Dick and Jane reader or an Old MacDonald album cover, the kind we remember from the stained glass window at Hillcrest, clear-eyed and fluffy.

Where are all the unlovely sheep, I want to know?  The black and blue sheep, the ones with matted wool, the ones in need of doctoring?   The ones who, before they ran off in the wrong direction, always hung out on the perimeter of the flock, never quite belonging?  Where are the sheep whose absence, when the others take notice, causes a not an outcry but rather a collective sigh of relief?

The sheep Jesus seeks aren’t  just lost, they are often the ones who feel and even look least loved."

It was with these words still swirling around in my head this week that I saw the video below, and my heart broke, the tears welled and spilled over.  In the adoption world, it is the older kids who are the "Unlovable Ones".  If you are older than 3 or 4 years old, or heaven forbid a tween or teenager, it is you who are "the ones with matted wool".  Older children are rarely adopted, for they come to relationships not with blank slates, but with chalk marks all over, erasures and re-writes.  They are often a "Hard Sell" for agencies, as they are not cute and cuddly, and people incorrectly assume they all come with attachment disorders (if they only knew how tough it can be with younger ones!).

But every single person deeply yearns to be precious to someone.  All it takes is one person, all it takes is to know that someone wanted you.  In watching this video clip, it was as if God sent a video to illustrate last weeks sermon, to make the pain of being unloved palpable to me.  No, we have no plans to adopt again, but this young girl's willingness to share her pain with the world all with the hope that someone might find her precious was the perfect reminder that there are those with gray hair who feel hopeless and lost, there are those whose lives are a mess who need to be precious, there are those who even look like they have it all together who might very well surprise us with their ache and longing if we only knew.

Please watch this, it's only 3 minutes, watch to the end:

May each of us find a way to be Jesus in the lives of those we meet.  May we each understand the need in all to experience the joy of being found.