Stepping away from controversy for awhile, and appreciating the respectful tone of most comments, we will return to our regularly scheduled programming :-)  Haha!  Other than Chick Fil A debates, this week has been a full one, with many ups and downs.  Do you ever have those weeks where you really recognize that just living your daily life can be plain old hard?  Where everything that can go wrong does go wrong...even if it isn't all that big of a deal it is just one frustration after another?  Well, that was the week that just ended, and we are all hoping the coming week is smoother.

Oh, it wasn't anything awful.  The kids and I had a tough time diving back into the books as we tried to settle in for the beginning of our "real" school year.  Though we have kept our toes dipped in the "school pool" all summer long, with kids like ours the long gaps are killers and it was clear that a couple were struggling mightily to recall previously learned information.  I got tons of blank stares, shrugged shoulders, and some stern Mom Talk was issued.  99% of our days are very enjoyable as we homeschool, however this past week consisted of the 1% when I have to walk away before I say something I'll regret.  I am thankful that it is really only 1% of the time I feel that way.  That is not to say that there aren't days when I feel like a total failure, because I have tons of those, but that is all about me and my own insecurity and not at all about the kids and their behavior or flagging commitment to do their best.  We are blessed that they really all do work very, very hard at most everything they do, and the way I see it is that it is only fair they have a day here or there once in awhile that they slack.  but shhhhhh...don't tell them that! Hahaha!

We had car issues with dead batteries, my clothes dryer has been broken for the entire week, and we spent an exhausting weekend in the heat at our local Sweet Corn Festival as we worked at our church booth selling hot dogs where we were far less successful than we hoped we would be.  I guess this week felt like a total flop in many different ways.  We are all wiped out, all in need of a little boost, all feeling just a little like we are spinning our wheels with not much to show for it in just about every arena.  Fix one thing at home, something else breaks.  Fix the car, there's a problem with something else.  Try something that requires a LOT of effort, it turns out to be time wasted.

As I look back over the past week, with all the difficulties that a real life is made up of, I have to ask myself if it really WAS wasted time.  So, we had car trouble.  Well, we were fortunate to have it die at a friend's house and were graciously driven to get Big Blue so we could get over to the Corn Fest, and were even told "If you need to stay all night, that's OK too!"...so we experienced the love and care from someone else that made a frustrating moment just a little better.  So, we had a dryer go out on us.  Well, we are fortunate enough to even own one, and don't have to line dry all our clothes every single washing.  So, we didn't make a whole lot of money for our church at the Corn Fest, well we did spread some LaJoy Laughter and Love as we spent time sweating with those we care so much about, and even those we didn't even know.

What matters is that someone took the shoe inserts out of her very own shoes prior to having to stand 4 hours herself and insisted I wear them so I might not be in as much pain.  What matters is that a family with another child adopted from Kazakhstan that we hadn't seen in about 8 years or so drove several hours out of their way all so they could visit with us while we worked at the Corn Festival.  What matters is that we had help in the dark and early in the morning as we all worked together to get the work accomplished this weekend.  What matters is that love wins, every. single. time.  I know it gets old, and you all probably get tired of hearing it from me, but there was a time in my life when I didn't get it...I really didn't.  Now that I do, it is always such a surprise to me how long it took me to learn it.  The rest is all just chaff adrift in the wind...the auto problems, the aches and pains of old age, the successes and failures.  The love remains, and often isn't even revealed until those moments when things are harder.

So here are a few photos and videos that served as reminders to me this weekend of what makes life so good.  I needed to see them today, I needed to eat pizza sprawled across a friend's couch as we watched the Olympics together and caught up with each other after way too long without connecting.  I needed to see, here and feel the things that really matter: 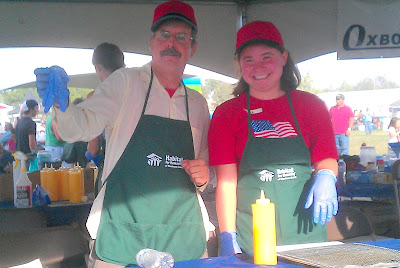 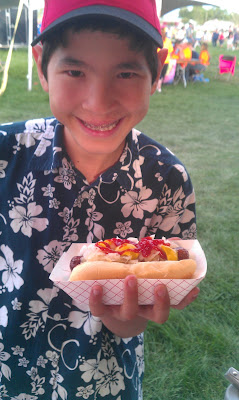 Kenny showing off a delicious brat, trying to lure customers. 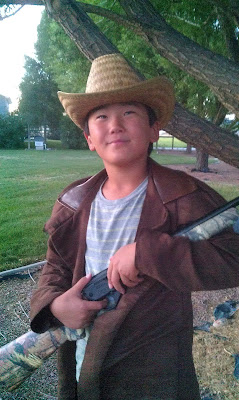 
The above video is Angela and Dad goofing around while working hard at his shop.  Her laughter is infectious!

Below is Matthew at the Corn Festival for Honor Guard (He is on the left and the first one coming in).  They have only performed their duties once before together, officially.  He was even featured on the JumboTron screen that was set up for the concert later that evening!


Joshua also got the great video of Kenny as he as handing out corn.  It was so cute as josh can running back to our booth saying "Mom, I just have to get a video of Kenny right now...he is so funny and GOOD at handing out the corn!  Everyone loves him!".  That is the sort of thing that warms my heart, that the kids appreciate each other so much.  They all wanted to go watch Matthew and were excited to see him up on stage.  Angela looked over at me and said "Mom, he is the best one!  He even LOOKS like he is in the military!"

So here is Kenny's Corn Dance (He takes after his mother and his pastor when it comes to Corn Fest time!), and THIS is what makes life worth it, even the hard days:

You have me thinking about failure. We have a friend who taught school and felt he was a failure because not all the students worked up to their potential, learned all they could, "succeeded" in school. He felt that if he could just teach "right", the students would reach their peak. By the time he left he had to have all his teeth capped because he had ground them down so far.

He was not a failure. He was an excellent teacher, and many of us tried to convince him that he had done what he could, that students bring their own motivation, background, expectations (some, expectations of failures), etc. just as yours do.

Then there is native intelligence, the profound influence of family, nutrition, drugs and alcohol, on and on.

There is also our societal definitions of success, and the guilt and shame that seems entrenched in so many of us (so many mothers feel it at one time or another).

I have a friend who has taught me about ANTs, automatic negative thoughts, like "I have failed at..." No one wants ants in their house, so too should we get rid of the ANTs in our minds. It helps to remember that they are ANTs and apply the insecticide of positive affirmation as soon as you recognize the ANT.

Now, Cindy, as all of you rid yourselves of ANTs, I am going to deal with a few of mine.

P.S. I used to write a family letter a month--pre blog days. It got to be a running joke (if I didn't joke about it, I would cry) about which car was broken and why, which piece of farm equipment was sidelined just when it was harvest time, and which two or three appliances died. (Mine never died one at a time.) It is anxiety producing, an extra weight on top of financial concerns. I remember an old cartoon of an evangelistic healer on a stage holding a vacuum cleaner in one hand, another hand raised over it and intoning, "Heal, brother, heal". Do you want me to come over, and we can all lay hands on your dryer and intone "Heal, brother, heal". Then when it doesn't heal we can all sit down and laugh over Diet Cokes and brownies?