Wow, did we have an amazing weekend, all within a 5 hour drive of our house! Although spoiled a bit by Dominick not being able to join us, we took full advantage of our adventure and had a blast. Here we are getting ready for our road trip: 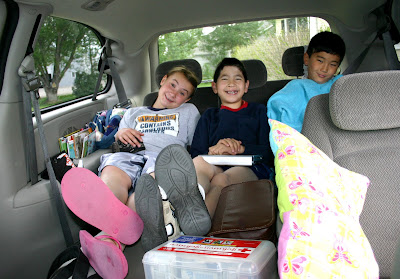 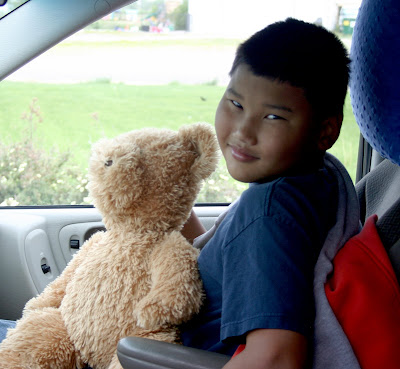 Of COURSE Teddy Bear had to come with us as a competent co-pilot!
We stayed the night in Delta, Utah, which for the uninitiated is officially "The Middle of Nowhere", but was near the UDig Fossil Quarry where we were headed to "dig us up some trilobites".
Despite being in official M.O.N. Land, we felt right at home as we met up with our friends who have done so much to help our family over the past 3 years serving as interpreters for our children, welcomers via Skype, and often researchers as well. I love how God puts people together, and although we had all only been around each other one time previously for a brief visit, it was like Old Home Week, and there wasn't a single moment of discomfort. Instead, it felt more like a family reunion...and that actually best describes it for we are family in some sort of unusual spirit connection sort of way.
The boys, Matthew in particular, were so immediately comfortable and visibly felt drawn towards others who looked and "felt" like them. It was a strong reminder to me that you can take the boy out of Central Asia, but you can never ever take Central Asia out of the boy. Denying our children's heritage fools no one, not even ourselves if we take the time to be honest.
We spent our first afternoon relaxing, swimming, catching up...and trying to come up with solutions to card tricks we were shown. Here the boys are quite puzzled and never did quite figure it out.: 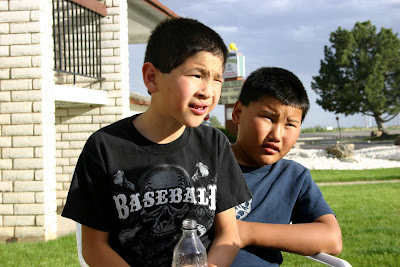 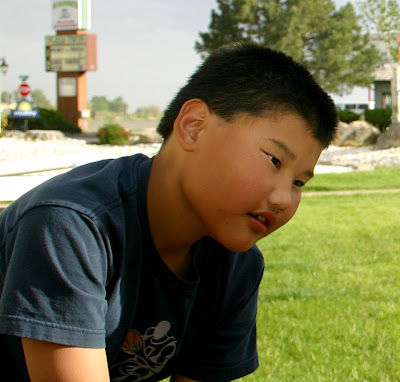 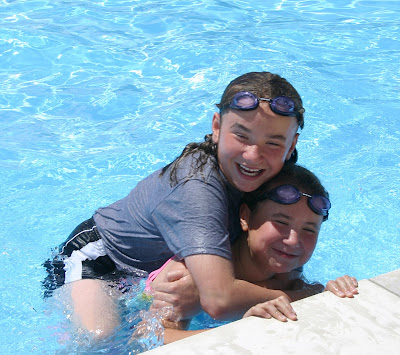 The next day was the Big Dig, and after an hour on a dirt road that was heavily washboarded, we made it in and before we even headed in to the quarry Angela had bent over and discovered our first fossil.
This was really an awesome experience. You are handed a bucket and a hammer, and let loose. The place is loaded with trilobites, which are fossils of small marine arthropods. It was warm, but we definitely went at the right time of year because it was not unbearably hot. We traipsed around with goggles and gloves and here or there plopped down at what we thought was a "hot spot" and dug in for awhile. We spent 23 hours and we found buckets full of complete and partial fossils!! You are allowed to bring home whatever you find, so we left with a car full and a nice variety of trilobites. 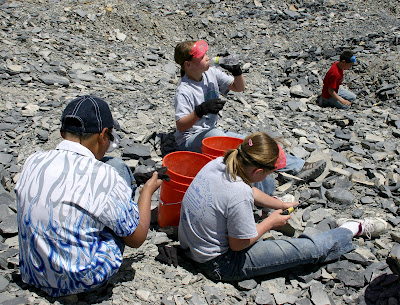 Here's the crew, hard at work! 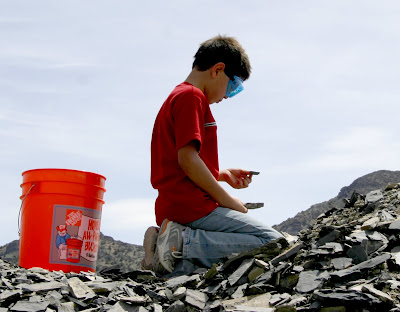 Kenny found something worth examining!! 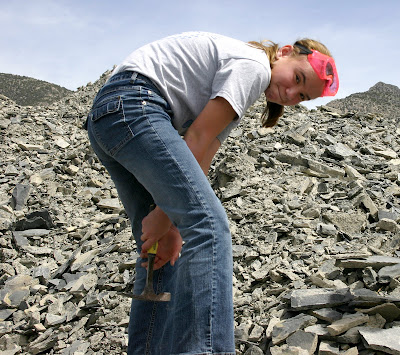 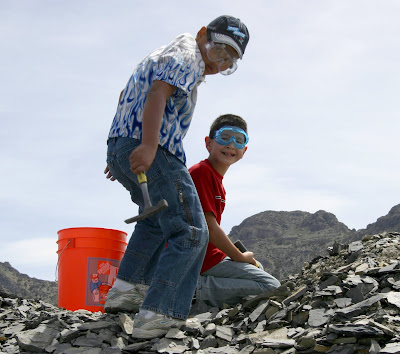 The boys had a total blast, as did the girls...what kid wouldn't want to explore a quarry where there is actually a treasure to be found? 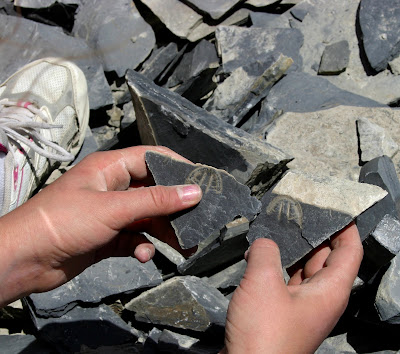 Here's just one example of what we found...we found full, complete ones broken out, impressions only, something that looked like a small jelly fish (which I hope made it in the car to come back!), and little snail-like ones. You can tell from my language that I am definitely not a future paleontologist :-) But I still had a lot of fun! 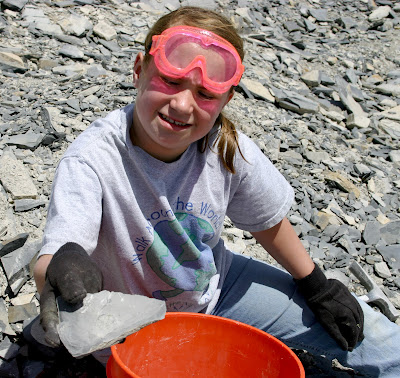 Olesya discovered a full impression!
We piled them all in the car and everyone agreed they had fun but were exhausted and ready to leave. We headed on to Lehi, Utah where we rested and visited a dinosaur museum the next day. First though, it was jacuzzi time! 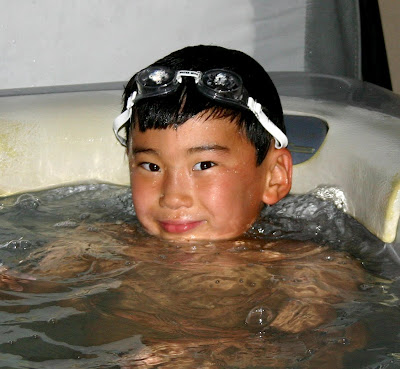 The museum was great and helped "connect the dots" for all the kids, but especially the girls who seemed to have little knowledge of dinosaurs. Angela was most impressed with the full scale skeletons, while Olesya and the boys all preferred the area where they had a huge water and sand area where they could study the effects of erosion and crate landforms. We saw a very cool 3D movie and on our drive home Kenny talked about it a lot, reminding me that visual imagery is the way to keep information in his head. He and Josh both really got a lot out of it, and Kenny said he hadn't been all that interested in dinosaurs until seeing the movie, and know he wants to learn more. 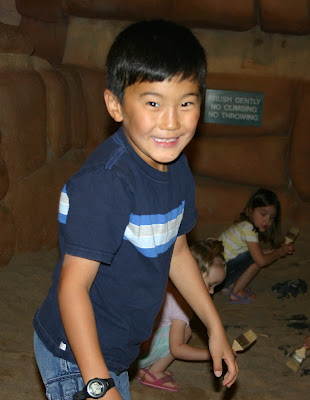 The kids all got to play in another area where they were at a pretend "dig" and could work on unearthing dinosaur bones. All of them enjoyed that a lot! 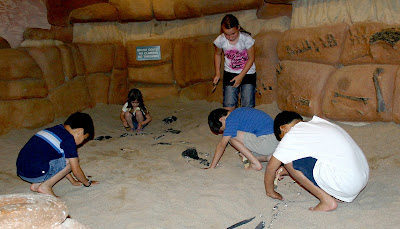 I literally laughed out loud when I saw this photo, as we have always joked about the Central Asian squat and here are all three of them doing it, and it hurts my old knees to even see it!
We had lunch at a nearby place where outside there was what turned out to be the most entertaining attraction of all, and it was free! There was a water contraption of some sort that had pipes and pumps and handles, and kids could make water come out different spouts. They all had the best time trying to get each other wet, running and giggling all around. I tried and tried to get a good picture of Matthew as he was more delighted than any of them, and his expressions reminded me of when he was a toddler. But he was moving so fast it was hard to get one in focus! 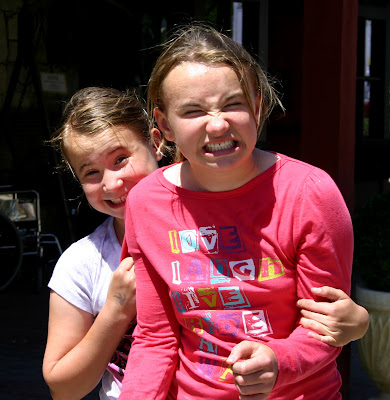 The girls are trying to avoid getting wet, and yet can't really resist the fun! 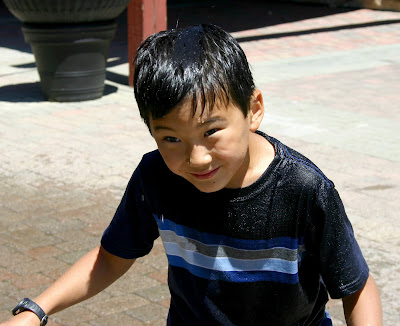 Josh, Kenny and Matthew were totally soaked and lovin' it! 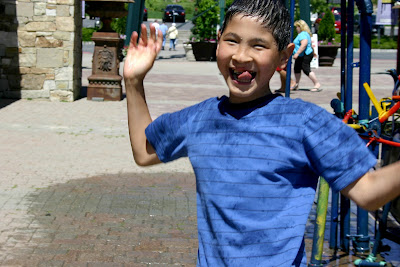 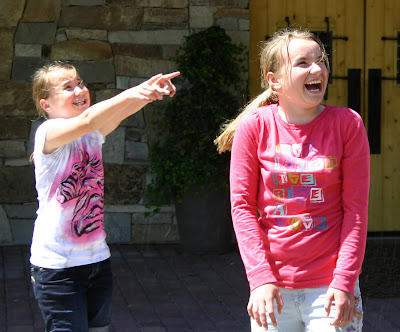 We returned home today, tired and happy, having had a real adventure that all of us will remember for a long time to come. We almost had a meltdown with Joshie when we left our friends, but he hung in there and did fine after we left. We will spend time over this next week looking at all we found, learning more about it all, and writing about our trip.
But the best part probably came from the moments in between...the times not necessarily recordable as "educational hours" for the state, but were for us more important. The girls getting to speak Russian again one last time while totally fluent before it starts really being lost...as is already happening. The pondering as a finger was rubbed over an ancient fossil. The quiet conversation as educational perspectives in the Soviet Union were discussed. The impressions taken away from being around another immigrant who struggled to assimilate into American culture and did so successfully. And the quiet whispers in bed as, in order, Joshua, Angela and Olesya each shared a bed with me and we talked softly about our day and nothing in particular but realized the personal "bubble" is long gone, and being near one another feels ever so sweet.
As always though, in trying to provide the kids with a"learning experience" it is I who comes away having been taught a lesson. In the car on the drive over, Angela was watching a movie featuring Queen Latifah. She laughed and then ripped her headphones out of her ears and turned to me excitedly. She said "Mama! She so beautiful...so funny...so strong! She like YOU Mama!! Like You!!". Now, I know some of you might not consider it a compliment to be compared to Queen Latifah, in fact many might take it as an insult.
I couldn't have grinned wider.
Me...strong, beautiful, funny. And that is how my daughter sees me. As she went back to watching the DVD, chuckling at all the funny parts, I recalled the fears I had in parenting girls and all the things I assumed I wasn't, instead of seeing what I might be for them. I am not pretty enough, I am not "girlie" enough, I am not good enough. A tape playing in my head which is not unfamiliar to most of us, I am guessing.
God knew though. In the eyes of my children, I am beautiful because I love them unconditionally. I am strong because I am not a pushover and I never give up, and they know that strength means I also will never give up on them. I am funny because...well...I am a goofball, but sometimes that works too :-) I am what they need, and I wish I could always remember that time worn phrase that God doesn't call the equipped, but instead equips the called. The Spirit gives what we need, we don't have to force it if we are indeed following the right path. We also do not need to see how it will all work out, we just need to trust that we will be given what is necessary, as will our children or others we love. We do not need to micromanage or fret, but we DO need to say "yes" when asked for the Spirit to walk in and inhabit the situation.
Sometimes getting to the "yes" can be excruciatingly difficult and painful, can't it?
In the meantime, you can just call me "Queen" for short...Angela said so :-) Hahahaha!
at June 06, 2010

Queen Latifah, I love it!
What a wonderful adventure.

So glad you've realized what we all knew from the start. You are more than equipped to be the mommy to girls :) And if Tyler ever finds out you got to go on a real fossil hunt...I'm in BIG trouble!

"Queen LaJoy" sounds perrrfect!! What a wonderful trip your family just had!! It's amazing to see (read) how far along your family has come!! God Bless You All!!

What Angela said brought tears to my eyes! How wonderful that she sees & has that example in you. AWESOME. And what Mom doesn't want to be seen as "strong, beautiful & funny?" I love it! :) I' glad you all had such a wonderful trip together.

Cindy I am so happy everyone is home and the girls & boys are thriving! I had no doubt they would, but what thanksgiving that deserves! :)

What a wonderful adventure! I'm glad it was successful and fun for all.

Once again, I need to thank you. You said "...we DO need to say "yes" when asked for the Spirit to walk in and inhabit the situation.

Sometimes getting to the "yes" can be excruciatingly difficult and painful, can't it?"

I am doing a lot of self-doubting right now and I need listen to the Spirit. Thanks. :-)